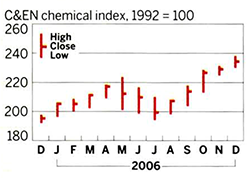 The fourth quarter was good for chemical company stocks but less beneficial to the share prices of major pharmaceutical companies and biotechnology firms. 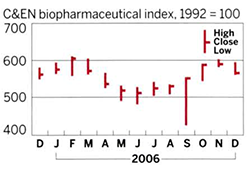 The chemical index was the only one of the three C&EN measures to outperform the stock market's broader indexes. The Dow Jones industrial average gained 6.7% in the quarter, while the NASDAQ was up 6.9%.

The same pattern holds when the C&EN indexes are compared with the end of 2005. The chemical index was up 20.3% over where it had been at the end of the previous year, and the pharmaceutical index rose 13.2%. The biopharmaceutical index finished the year just two-tenths of a point higher than the 567.4 posted on the final trading day of 2005.

For the chemical companies that make up C&EN's index, the gains were widespread. Comparing the end-of-the-year stock price for individual firms with those of the third-quarter close, just two companies saw declines. PPG Industries was down 3.5% to close the year at $64.21 per share, and Georgia Gulf closed at $19.31 per share, down 28.7%. Georgia Gulf's decline came after the company reported an 8.6% earnings decrease in the fourth quarter; Chief Executive Officer Edward A. Schmitt said the company expects continued softening in demand.

The largest gain among the 25 chemical companies that make up the index was at fertilizer producer Terra Industries, whose stock price jumped 58.4% from the end of the third quarter and more than doubled, increasing 113.9%, from the end of 2005 to $11.98 per share.

Although not quite in Terra's league, fellow fertilizer maker Mosaic also did well, posting a 29.8% quarterly rise and a 46.0% annual increase to $21.36 per share. One reason for the increases, according to securities analysts, is the expectation that farmers will take advantage of the high price of corn by increasing the acres they plant, and fertilize, this year.

After Terra, the largest year-to-year chemical company gain was at Albemarle. Its share price increased 87.2% over year-end 2005 to $71.80. The company's quarter-to-quarter gain was also pretty good, at 33.1%.

Nicole Daniel, Albemarle's head of investor relations, attributes the healthy stock price rise in part to greatly improved earnings-they were up 71.9% for the first nine months of the year. Another positive was Albemarle's 2004 acquisition of Akzo Nobel's refinery catalyst business. Investors took a wait-and-see attitude toward the deal during 2005, she indicates. But with good 2006 results, they got back on board.

How did the big guys do? Stock performance at Dow Chemical and DuPont took divergent roads. Industry leader Dow's stock price rose just 0.1% from the third quarter and was off 8.9% year-to-year to $39.94 per share. Dow's stock price certainly was not helped by rumors, late in the year, that the company would buy Georgia Gulf.

Stock price growth was rather lackluster among the nine companies making up C&EN's pharmaceutical index, although an exception was Schering-Plough. The company turned in the largest quarter-to-quarter increase of the pharma group, with 7.0% growth to $23.64 per share as its financial turnaround continues and investors take more interest in the firm. For the year, Schering-Plough's stock price was up 13.4%.

The two big drug companies with quarter-to-quarter stock price declines were Eli Lilly & Co. and Pfizer. Both companies had problems. In Pfizer's case it was with a new cholesterol drug, torcetrapib. Clinical trials were halted after a safety monitoring board found a significant increase in mortality rates among patients taking a combination of torcetrapib and Lipitor, Pfizer's flagship cholesterol agent.

In Lilly's case, the problem was an agreement to buy biotech firm Icos. Often, investors just don't like acquisitions until they are shown to work, as in Albemarle's case with the refinery catalyst business.

If there was one big sigh of relief, it could have come from investors in Merck. As a result of its record, thus far, in winning lawsuits over the withdrawn arthritis drug Vioxx, the company's stock price increased 4.1% from the end of September and 37.1% from the end of 2005 to $43.60 per share. Only a handful of the thousands of suits have been decided, however.

The three largest companies among the group of 14 firms making up C&EN's biotech index did not show up well in the survey. The largest biotech company, Amgen, saw its stock price decline 4.5% from the end of the third quarter to $68.31 per share, and it was off 10.0% from the end of 2005.

The number two company, Genentech, which traditionally seems to be more esteemed by Wall Street than Amgen, saw its share price fall 1.9% from the end of September and 12.3% from the last trading day of a year earlier.

And Genzyme's stock declined 8.7% from the third quarter and 13.0% from the previous fourth quarter to $61.58 per share.

Share X
To send an e-mail to multiple recipients, separate e-mail addresses with a comma, semicolon, or both.
Title: Chemical Stocks Beat The Rest
Author: William J. Storck
Chemical & Engineering News will not share your email address with any other person or company.