Popular confection began as a not-so-sweet treat from trees 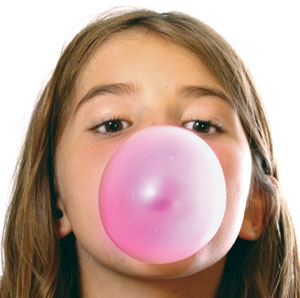 GUM, PERHAPS the world's oldest confection, began as an edible treat from trees. Although far less sweet than today's gums, a chewy tree sap called mastiche was a favorite of the ancient Greeks. Its name derived from the Greek word mastichan meaning "to chew."

On the other side of the world, the Mayans enjoyed chewing on tsictle, the sap of the sapodilla tree (Manilkara zapot). Farther north, Native Americans living in what is now New England enjoyed the sap of spruce trees (Picea genus). Spruce-sap chewing gums were first brought to the U.S. market in the mid-1800s by entrepreneur John Curtis, who sold small sticks of "Maine Pure Spruce Gum."

Spruce-sap-based gums were later replaced by those made with petroleum-derived paraffin wax. Gum makers added sugar to their paraffin gums to increase their sweetness. Such gums were sweet but not chewy enough. For the right level of chewiness, gum makers turned to an old favorite: tree sap. The Mayans' tsictle-called "chicle" in the U.S.—came to dominate the gum market.

Chicle's victory in the U.S. gum market was inadvertently catalyzed by Gen. Antonio Lopez de Santa Anna, of Alamo fame. Credited with bringing chicle to the U.S. while in exile from Mexico, Santa Anna hoped chicle would replace that other famous tree sap-rubber. Rubber, from the Para rubber tree (Hevea brasiliensis), was growing into its own booming business involving everything from tubes to tires, and the general had hoped chicle could muscle in on some of the markets.

Using chicle from Santa Anna's stash, another American inventor, Thomas Adams, proved chicle was no substitute for rubber. However, Adams and his sons found that heating chicle with sugar and flavor yielded a gum superior to paraffin-based predecessors. Chicle gum in hand, Adams got a patent for a gum manufacturing machine and founded Adams Sons & Co. in the 1870s. Americans were soon chewing Blackjack, the first flavored gum.

Blackjack gum consisted of three major ingredients: gum base, sugar, and licorice flavoring. Gum's basic recipe???base, sweetener, and flavoring???remains unchanged. It is used by modern manufacturers including Cadbury Adams (as Adams' company is now known) and Wrigley, among others. Although the recipe has not changed, the base has. Like spruce sap and paraffin before it, even the sapodilla-derived chicle was fated for replacement. It was World War II that did it in.

Widespread trading of gum rations by U.S. soldiers during WWII brought American chewing gum to the world, a market that soon outgrew the supply of sapodilla trees. "Chicle comes about sort of the way maple syrup does," says Deborah Schimberg, president of Glee Gum, the only U.S. gum still containing chicle. The tree's sap is collected by workers who climb the trees and use machetes to tap the sap, she says. A single tapping yields only 2.5 lb of chicle, and trees can be tapped only once every three to four years.

WITH THE AVERAGE American now chewing 300 sticks (1.5 lb) of gum per year, according to government statistics, sapodilla trees would have been tapped out long ago had it remained the gum base of choice. Chemistry came to the rescue, and since WWII gum manufacturers have relied almost exclusively on synthetic gum bases.

What exactly are these synthetic bases made of? Here is where things get sticky. "The proprietary bit of knowledge that is really guarded is the gum base," Schimberg explains. Each type of gum, from those best suited to simply chew or those designed for blowing huge bubbles, requires a slightly different base. "All of these gum bases use various elastomers, resins, and waxes in different combinations," Schimberg says. According to gum research and company websites, we're often chewing on synthetic polymers—styrene-butadiene rubber, polyethylene, polyvinyl acetate—with a bit of natural latex thrown in.

The various ingredients in gum are not listed on the back of the package. Unless certain health or other claims are made, gum is exempt from labeling requirements enforced by the Food & Drug Administration. Even if every tiny pack of gum bore a label, the many ingredients that make gum chewy can legally be lumped together as "gum base."

In addition, a number of companies, including Ford Gum and Gum Base Co., focus solely on developing and manufacturing new and improved gum bases. Gum base is big business, but the purpose of any gum base is the same. "It really is just a delivery system for getting sugar and flavor into your mouth," Schimberg says.

Most gum makers market their products as candy, but others have stretched gum's use. There now are gums to help kick smoking and others to protect your teeth. There are gums that deliver caffeine and vitamins. And if some researchers have their way, there someday will be gums that deliver therapeutic drugs. One of the world's oldest confections clearly is no longer just for fun.