Relevant programs, awards, and tools forge links to chemists under 35 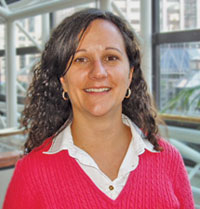 Born in the midst of the Vietnam War, Watergate, and the dawn of environmental activism, the Younger Chemists Committee is not so young anymore. "YCC will turn 35 in 2009 and will be older than its members," says YCC Chair Katherine Glasgow, a senior materials scientist at Nomacorc, a Zebulon, N.C.-based manufacturer of synthetic wine corks.

Despite its advancing age, YCC remains as energetic and focused as it was when it was formed during the turbulent 1970s. The committee was started by the American Chemical Society in 1974 with the goal of providing service to and retaining younger chemists within ACS. YCC addresses specific issues facing younger chemists and serves as a voice to the society on behalf of younger chemists.

Glasgow believes this has its advantages. "There's a lower barrier to change in YCC because its members can't stand on tradition to say 'This is the way we've done it for the past 15 or 20 years.' Members are always bringing in fresh ideas," she says.

YCC membership is diverse, encompassing graduate students, fledgling professionals, and younger chemists who have changed careers. Officially, there is no age limit for participation in YCC activities, but those serving on the national committee must be under 35.

Younger Chemists Committee At A Glance

15 full members, 18 associates, one staff liaison, one consultant, one Committee on Committees liaison, and many liaisons to and from other committees

At ACS national meetings, for example, YCC sponsors programming and symposia on topics that "are closely tied to current market trends or very relevant to people just starting out in their careers," Glasgow says. At last month's meeting in Boston, for example, YCC cosponsored programs on international opportunities for chemists; on the ethics, politics, and policy of being a responsible chemist; and on the changing biopharma industry.

These YCC workshops are held in conjunction with annual ACS Leaders Conferences. The workshops, each of which is open to a total of 30 people, differ from traditional management training programs in that "they really focus on how to lead people in projects or on teams when those people don't report to you and you really can't issue direct orders," Glasgow says. They help younger chemists "develop skills for influencing and coaching peers to make them more effective team members," she continues.

To make these benefits available to a bigger slice of its membership, in 2003 YCC began sponsoring a competition for travel awards that cover the expenses for 15 recipients to attend each workshop. "The response has been overwhelming," says Glasgow. "Last year, YCC received applications from 80 chemists, many of whom were overqualified." To fund the awards, YCC switched its newsletter from print to electronic distribution, diverting the savings on postage.

In addition, over the past several years, YCC has encouraged local sections to form grassroots YCCs by providing resources, including starter grants and kits.

Many local YCCs are now putting on "amazing programs" including dynamic scientific symposia, tours of industrial sites, and workshops on topics ranging from immigration to entrepreneurship to interviewing, Glasgow says.

The Northeastern Section YCC is a case in point. It sponsors a weeklong exchange between its graduate students and those in the German Chemical Society's Younger Chemists Committee.

In addition to supporting local YCCs, the committee is pioneering the use of electronic tools for ACS as a whole. For example, it is beta-testing electronic communities on Facebook and Google Groups, where it has forums to discuss the most recent national meeting, swap career advice, or find or act as a mentor, among others. Recently, YCC added two new networking features to its Web page-a discussion board and a volunteer sign-up.

Many "are curious about what we are going to do to commemorate our 35th anniversary," the plans for which are in the works, Glasgow says.

With its track record for finding ways to blend younger chemists into the ACS fold, YCC will undoubtedly have a lot to celebrate in 2009.