Swimming With The Fishes
[+]Enlarge
Credit: Phylonix
Zebrafish embryos can be housed in individual microplate wells for live-animal assays.

Chemists' burgeoning interest in using zebrafish to complement other animal models and cell-based assays motivated an afternoon session sponsored by the Division of Chemical Toxicology at the American Chemical Society national meeting in Boston last month, according to organizer Peter C. Dedon, a professor of toxicology and biological engineering at Massachusetts Institute of Technology.

The session demonstrated the utility of zebrafish in a wide range of applications in drug discovery. Participants chronicled their use of zebrafish to assess drug toxicity and efficacy, to find bioactive small molecules, and even to find genes coding for potential new drug targets. Speakers advised against drawing too many parallels between results in zebrafish and expectations in humans and other mammals, however, without the proper experimental evidence. "This eclectic group of zebrafish experts brings a lot of perspective for those who want to learn more about new model systems for drug and toxicity testing," Dedon said.

Interest in using zebrafish is on the rise for several reasons. Zebrafish are small and inexpensive to maintain, and they produce hundreds of offspring in every mating, easily accumulating statistically significant numbers of animals. What's more, zebrafish embryos are transparent and develop outside the uterus, making it easy to monitor developing fish. In fact, zebrafish embryos are tiny enough to be raised in microplate wells for high-throughput whole-animal assays. Many test compounds can diffuse into zebrafish embryos, simplifying drug administration. Researchers can also readily identify zebrafish with gene mutations. Lastly, as vertebrates, zebrafish and other fish have most of the same organs and organ systems that mammals do, making them more relevant in whole-animal assays than fruit flies or roundworms, which have also been used in early drug discovery screening.

Without the complex physiological environment of an intact organism, in vitro tests, such as cell- or tissue-based assays, may not always be representative of the in vivo response. Drug action involves metabolism, as well as interplay among different tissues. Zebrafish present a practical option to conduct high-throughput screening in a whole organism at a very early stage of drug discovery.

ALONG THESE LINES, Leonard I. Zon, director of the stem cell program at Children's Hospital Boston, described at the meeting how his lab has used zebrafish to scour massive compound libraries for a specific biological outcome. Zon, a hematology/oncology specialist, sought a compound that could increase blood stem cell numbers. "Many patients who have leukemia get a cord blood transplant, but there aren't many stem cells in a cord," he said. That means the precious cells are less likely to take hold, especially in adult leukemia patients. "A way to amplify cord blood stem cells even twofold could dramatically increase the chances of a successful transplant," Zon explained.

His team exposed zebrafish embryos to a 2,500-compound library and found that precursors to the lipid prostaglandin E2 increased zebrafish's blood stem cell numbers, whereas nonsteroidal anti-inflammatory drugs that block prostaglandin synthesis decreased the number of blood stem cells. Importantly, the team was able to extend these results to adult zebrafish and validate the results in mice. The researchers now are planning a clinical trial.

Jacqueline Lees, a biology professor at MIT, put zebrafish produced by her MIT colleague Nancy Hopkins to use in another screen, in this case searching for new cancer and cell cycle control genes. Lees described her search, which involved sifting through a library of zebrafish embryos with precisely generated and cataloged mutations. "It is in part because of breakthroughs in zebrafish technology, which allow rapid and precise genetic control, that the interest in zebrafish as a model is surging," commented Dedon. Lees's group searched for mutations that lead to visible external tumors or a shorter life span. Sure enough, the screen turned up eight genes that predispose fish to tumors, one of which was a zebrafish relative of a known mammalian tumor suppressor gene.

Traversing the drug discovery landscape from a gene to a drug target is no easy task, but this technology has potential to contribute to the search, according to Dedon. "Lees's research is laying the foundation that will be relevant to the drug industry in the future," Dedon said.

After large-scale compound screens yield a few hits, it's important to collect data on drug toxicity and efficacy as early in the drug development process as possible to avoid costly, late-stage derailing of a promising drug candidate. Patricia McGrath, president and chief executive officer of Cambridge, Mass.-based contract research firm Phylonix Pharmaceuticals, and her colleagues have come up with ways to get this information out of zebrafish.

At the Boston meeting, McGrath described a variety of techniques for quantifying drug effects rapidly and precisely in specific organs and tissues. Some of the tests seemed plucked right out of a hospital emergency room. For example, zebrafish electrocardiograms (ECGs) are handy for gauging drugs' cardiovascular effects. "We only need two electrodes as opposed to four," said McGrath, referring to differences in the number of chambers in a zebrafish's heart and a human's. "The zebrafish ECG pattern is very similar to ours," she added.

It's not unexpected that a zebrafish's heart might be similar to a person's, but it's a little more surprising that scrutinizing a fish might help cancer patients prevent the hearing loss associated with many cancer treatments. It so happens that zebrafish have clusters of sensory hair cells spanning their bodies, and these cells, which help fish gather in schools and fend off predators, are similar to human inner ear hair cells.

Finger On The Pulse
[+]Enlarge
Credit: Phylonix
It takes only two electrodes to get an electrocardiogram of a zebrafish. 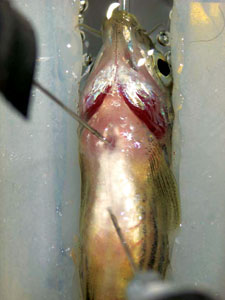 Credit: Phylonix
It takes only two electrodes to get an electrocardiogram of a zebrafish.

Researchers at Phylonix exploited the fact that zebrafish embryos are clear and found a specific stain for the sensory hair cells that makes it easy to monitor live fish for changes in these cells. The researchers administered chemotherapeutic agents to the fish and observed hair cell loss, but they were able to prevent that loss by pretreating the fish with known protective compounds. These results validate the test as a way to evaluate both the toxicity of new oncology drugs and the protective properties of new agents for preventing hearing loss.

Screens such as these form the backbone of Phylonix' recent contract with the Environmental Protection Agency's ToxCast project, which aims to assess new ways to characterize and pinpoint toxicity (C&EN, Aug. 6, page 34; C&EN Online Latest News, Aug. 8). Zebrafish screens are the only whole-animal assays that EPA has selected for ToxCast, illustrating the growing interest in using zebrafish to predict effects and toxicities of compounds in humans.

Sometimes it isn't the drug candidate itself that's toxic, but its breakdown products. Cytochrome P450s are the major oxidative enzymes involved in drug metabolism. These enzymes chemically modify and degrade drugs, usually by inserting an oxygen atom into the drug molecule. In Boston, John Stegeman of Woods Hole Oceanographic Institution described his efforts to compare zebrafish cytochrome P450 genes with those of other animals. He cautioned that there is not always a direct matchup between P450 genes in zebrafish and in mammals.

THE IMPLICATIONS of Stegeman's conclusions are critical to metabolism studies that rely on zebrafish-based assays, according to Fred Guengerich, chair of the ACS Division of Chemical Toxicology and a cytochrome P450 expert at Vanderbilt University. "If you see toxicity in zebrafish, and it is related to metabolism, the result may or may not be the same in people," he said.

Zebrafish are an up-and-coming complement to the drug discovery arsenal. Ultimately, however, the fish's strengths for drug discovery research must be matched by the potential of the research results to translate into contexts relevant to humans, according to Guengerich. "The real value of using zebrafish as a model is as a way to define molecular mechanisms, and this is information that we can use intelligently in mammals, ultimately on human systems," he said.