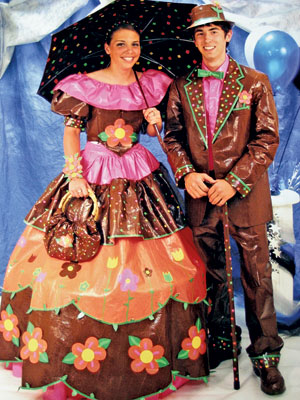 ADRIENNE BEILER and Zac Cupler knew they would stick out at the prom. The formal attire and accessories they fashioned for the high school dance took a year to complete and required about 40 rolls of colored duct tape, but the couple won first prize in this year's Stuck at Prom Contest.

Henkel Corp., makers of Duck Tape brand duct tape, sponsors the annual contest, in which participants craft prom wear from duct tape in the hopes of winning a college scholarship. This year, 180 couples entered the contest from across the U.S. and Canada, and more than 50,000 people voted online.

The contest is just one example of how this versatile and beloved self-adhesive product has secured a niche in pop culture far from its humble beginnings circa World War II as an all-purpose fix for everything from canisters and trucks to ductwork.

Like other self-adhesive tapes, duct tape owes its stickiness to pressure-sensitive adhesives (PSAs), which are soft, solid polymer blends that adhere to a surface via van der Waals forces when light pressure is applied. "Other adhesives, like glues and epoxies, are liquid when you apply them, but they react chemically and harden," says Costantino Creton, a materials scientist at the School of Industrial Physics & Chemistry in Paris. "PSAs have no chemical reaction. They don't change at all. They are in the solid state when you apply them, and they stick in their solid state."

Fast fix and no fuss—that's why consumers love all kinds of tape. Moving? Buy lots of packaging tape. Injured? Bring out the butterfly strips or at least an adhesive bandage.

Manufacturing industries have bonded with tape, too. For example, rearview mirrors in cars are held up with strong double-sided tape. Cell phones and cameras have a lot of low-strength tapes designed to keep components in place without the hassles of leaking liquid materials. And unlike glues and epoxies, PSAs can move as much as several tenths of a micrometer, Creton says.

The first patents related to PSAs appeared in 1845. Natural rubber, pine gum, and turpentine were mixed together for a surgical tape. Water-activated adhesive tapes soon followed. In 1925, Richard G. Drew of 3M created the first masking tape. Used during automobile painting, the tape could be removed without damaging the paint. He introduced the first transparent tape in 1930, which soon became known as Scotch tape. 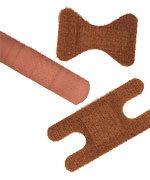 Modern PSA tapes typically consist of four thin layers: backing, release coating, primer, and adhesive, says Lyle C. Chacka, an adhesives specialist at 3M. Flexible backing materials are usually about 50–100 µm thick and include paper, polyethylene or polypropylene films, cloth, metal foil, vinyl, or foam. Backings have a coating on each side. The release coating, often a polyvinyl carbamate, prevents the tape from adhering to itself when pulled off a roll. The other side of the backing is covered with a primer that has an affinity for the adhesive and allows it to attach to the backing.

The adhesive material itself is tailored for a given application, says Ray A. Cull, technical director of new products at Henkel. Key considerations include removability, duration of adhesion, environment, and price.

The main component of the adhesive itself is always a polymer. Styrenic block copolymers, for example, are often used for adhesives on packaging and double-sided tapes. Office tapes usually employ water-based acrylics, and silicone adhesives are found on medical tapes.

What actually makes tape sticky are other chemicals added to enhance the main polymer's deformability and flow properties. For example, natural rubber—the polymer used in duct tape—lacks tack. Adding a polyterpene resin, however, maintains the cross-links that link the polymer's strands but minimizes strand entanglement. These changes increase the polymer's softness and flow, giving the tape its characteristic stickiness.

The tackifying agent is the only other component that can be present in almost the same quantity as the polymer, Creton says. Minor components may be added, including oils or antioxidants to adjust properties such as waterproofing or ingredients to create, say, a satin finish for tape intended for gift wrapping. Adhesive layer thickness ranges from 20 µm for typical office tape to 50 µm for duct tape.

Academic and industrial researchers continue to study adhesive tape. Some work is aimed at a thorough understanding of adhesion or creating stronger PSAs.

Other projects are inspired by naturally occurring biological adhesives. One example is the Stickybot, a robotic lizard that can climb smooth, glasslike surfaces with ease because of the innovative adhesive on its feet. The adhesive mimics the sticky microstructures found on gecko feet.

And industry continues to respond to customer interests by tweaking existing tapes. Otherwise, there would be no colored duct tape to make award-winning prom outfits.