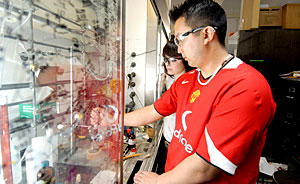 A NEW CATALYST developed by researchers at the University of Illinois, Urbana-Champaign, enables selective, predictable oxidation of aliphatic C–H bonds at tertiary carbon centers in complex molecules, without the need for directing or activating groups (Science 2007, 318, 783).

"We believe that this discovery can contribute significantly to streamlining the practice of organic synthesis and change the way we think about the reactivity of these very inert bonds," says chemistry professor M. Christina White, who created the catalyst with graduate student Mark S. Chen.

The iron-based catalyst incorporates a derivative of the so-called mep ligand—N,N′-dimethyl-N,N′-bis(2-pyridylmethyl)ethane-1,2-diamine—in which the methylamines are replaced with pyrrolidine rings to make the structure more rigid.

The catalyst uses hydrogen peroxide to oxidize C–H bonds to C–OH. It is also bulky and electrophilic, and given a choice of C-H bonds in a complex molecule, the catalyst will preferentially and predictably target sterically accessible, electron-rich bonds at tertiary carbons. In one example, the antimalarial natural product (+)-artemisinin, which has five tertiary C–H bonds, was oxidized predictably at C-10 to produce (+)-10β-hydroxyartemisinin as the major product, with an initial yield of 34%. When the starting material was recycled twice, the overall yield went up to 54%. Although the catalyst does not require directing groups, carboxylic acids can be used to direct diastereoselective lactonization at secondary C–H bonds.

The reaction also preserves stereochemistry at tertiary C–H sites, suggesting a concerted mechanism rather than radical chemistry, White says. It's also environmentally friendly—it would not only eliminate waste generated by the need to add and remove protecting groups in traditional organic sequences for installing oxygen but also produce water as its only catalytic by-product.

"The high degree of stereo- and regioselectivity of this nonheme iron catalyst is extremely impressive and uncommon outside the realm of enzymatic systems," says Steven J. Brickner, a research fellow in antibacterials chemistry at Pfizer. He adds that the catalyst holds strong promise for simplifying synthesis of highly complex molecules.