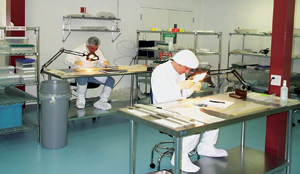 EVER SINCE DOW CORNING'S nightmarish involvement with silicone gel breast implants in the early 1990s, large polymer makers have tended to steer clear of the medical device business. But that is beginning to change. A growing implant market is piquing the interest of established polymer producers and smaller start-ups alike.

Suppliers of implantable materials haven't forgotten the bitter lessons that forced Dow Corning into bankruptcy for nine years. The firm emerged from bankruptcy reorganization just three years ago after agreeing to pay $3.2 billion to women who claimed that silicone breast implants made them ill. But implant material suppliers today can count on legal protections, available since 1998 under the Biomaterials Access Assurance Act, that weren't available to Dow Corning in 1995.

Just as important are demographic trends. People in developed countries are living longer and want to remain active well into their twilight years. Polymer-containing devices such as artery-opening stents, heart pacemakers, and hip replacements can improve life quality for a growing population of older people. And then there are the profit opportunities offered by the $50 billion-per-year global medical device market. Medical polymers, in turn, are a roughly $1 billion business growing 10-20% a year, several sources tell C&EN.

Among those who see more opportunity than risk is engineering polymers maker Solvay. Until last month, the Belgian firm would sell its polymers only to medical device makers using the materials in products, such as dialysis membranes, that would be in contact with bodily fluids for less than 24 hours. The firm has changed its policy and has introduced a line of four polymers specifically developed for long-term use in medical devices. It also built a dedicated facility in Alpharetta, Ga., to make them.

Solvay's family of polymers for implantation includes polyether ether ketone for use in spinal implants and orthopedic prostheses. Shawn Shorrock, health care global marketing manager at Solvay Advanced Polymers, says the firm is offering device makers other biocompatible materials, such as self-reinforced polyphenylene, polyphenylsulfone, and polysulfone, that were previously not available for implants.

According to Shorrock, designers of advanced medical devices are demanding medical polymers with properties that the current crop of qualified resins just can't deliver. "We can help with more plastic options," she says. "We are willing to work closely with medical device makers."

The Netherlands-based DSM stuck its toe into the water three years ago when it began supplying ultra-high-molecular-weight polyethylene for medical sutures. The company liked what it saw, and two months ago it began to offer the material to medical device makers for use in hip and knee joint replacements. The medical device market has so entranced DSM that the firm has also invested in a number of medical polymer start-up ventures.

Steve Hartig, DSM's vice president for biomedical materials, contrasts the polymers he markets with ones DSM sells for more traditional industrial applications. "Biomedical polymers are sold in much smaller volumes, have stricter regulatory requirements, and the work to develop new applications takes much longer," he says.

DSM has also invested in a number of implant materials start-ups. Among them are Xylos, a maker of bacteria-derived biocellulose, which shows promise in a number of musculoskeletal- and neuro-implant applications. Another firm, Oxford Performance Materials, develops high-performance thermoplastics for orthopedic use. 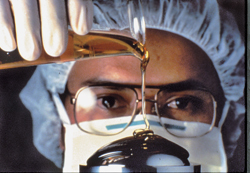 Other new participants in the market for implantable plastics include Vertellus Specialties, which last year licensed methacrylate-based phosphorylcholine coatings technology from Biocompatibles Ltd. Vertellus, itself formed a year ago by private equity firm Arsenal Capital out of the former Reilly Industries and Rutherford Chemicals, is developing the polymer as a nonstick biocompatible coating for medical devices.

And five years ago, alginates maker FMC got involved in supplying polymers to medical device makers when it purchased Pronova Biomedical, a supplier of alginates and chitosans, which are two types of polysaccharides, for pharmaceutical and medical uses. To address legal concerns, Arne Dessen, business director of FMC's NovaMatrix business unit, says his firm requires the device makers it supplies to indemnify NovaMatrix, be "properly insured," and be "large enough" to assume the liabilities associated with manufacturing medical devices.

To insulate it from potential liability, NovaMatrix helps set up new ventures in which it takes an interest and ultimately hopes to sell to large device makers. One of them, Thercardia, based in Minneapolis, makes coatings for cardiovascular stents that encourage cell growth around the stent but discourage artery clogging. The coating could be used on bioabsorbable stents as an alternative to metal mesh drug-eluting stents, which in some cases are suspected of causing blood clots that lead to heart attacks.

But many firms supply polymers for implants only tentatively or not at all. Dow Corning remains leery of supplying plastics that will be used in the body longer than 30 days. In 1993, it stopped supplying silicones for many permanent implants. Today, it sells silicones in some cases but has strict guidelines on when and where the implants may be used.

Kevin P. Murphy, Dow Corning's global health care marketing manager, says supplying silicones for implants is "a business we approach cautiously. And when we work with manufacturers, we require they indemnify us." Murphy says the firm is emphatic about telling customers, "We do not design medical devices, but we are happy to work with customers on the materials."

Silicones competitor Wacker Chemie is even more cautious. "For safety and product liability reasons, Wacker does not sanction the use of silicone products in medical implants and therefore does not sell into the long-term implant applications" arena, says a company spokesman.

DuPont once supplied polytetrafluoroethylene, known more routinely as Teflon, to manufacturers of temporomandibular jaw implants. The firm spent millions of dollars to successfully defend itself against more than 1,000 lawsuits that blamed implant failures in part on the Teflon. "We tend to make a point of not pursuing the implant market," says a DuPont spokeswoman. "We are raw material ingredient suppliers. We have no expertise in medical devices and no interest in developing them."

DuPont updated its policy in 2004 to allow its plastics to be used in long-term implants on a case-by-case basis at the discretion of corporate management. The spokeswoman asserts, however, "Our policy hasn't really changed. We live in a really litigious society."

Eastman Chemical, which supplies plastics for nonimplantable devices such as syringes, surgical instruments, and blood therapy systems, specifically excludes the use of its polymers in devices implanted for more than 30 days. The company says its products "have not been designed for nor are they promoted" for such end uses, and it adamantly proscribes their use in "any critical component in any medical device that supports or sustains human life."

IN CONTRAST, other companies have supplied medical-grade polymers through thick and thin. According to Robert S. Ward, chief executive of Polymer Technology Group, the departure of big suppliers such as DuPont and Dow Corning left the field wide open to companies such as his. Started in 1989, the Berkeley, Calif.-based firm employs 80 people and supplies device makers with resins such as polyurethane, polycarbonate-urethane, and silicone-polyether-urethane.

As for liability, Ward says his firm is protected by the Biomaterials Access Assurance Act. In addition, he makes sure his company is named and protected under a device manufacturer's liability insurance.

Privately held NuSil Technology has been a mainstay supplier of medical polymers since 1975. After Dow Corning withdrew from the breast implant materials market, NuSil continued to supply implant makers such as Inamed, now part of Allergan, and Mentor. "We are a small company," says Stephen Bruner, NuSil's marketing director. "The legal risk for us is lower than for some larger firms."

As Bruner explains: "We are not in a position to determine the effectiveness and safety of materials in a device configuration. What we do is to provide materials that meet manufacturers' specifications. How the materials are used is not something we can control."

But one thing Bruner is certain of is that an upsurge in medical device innovations is on the way, driven by the needs of an aging population. The demand for polymers will grow in tandem, offering opportunities to suppliers that can stomach the long-term risks of a health-care-related business.