A Rose Is A Rose
[+]Enlarge
Credit: Lisa Jarvis/C&EN
People often get tattoos to commemorate life milestones such as a 50th birthday. 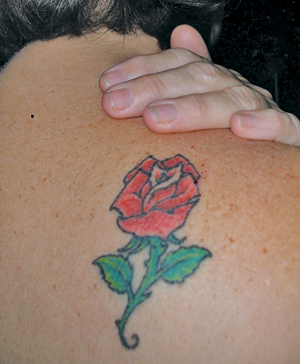 Credit: Lisa Jarvis/C&EN
People often get tattoos to commemorate life milestones such as a 50th birthday.

A FEW YEARS back, I had a surreal exchange with my mom. She called me about a week after her 50th birthday, and from her breathless greeting, it was clear something was up. "Guess what your uncle and I did for my birthday?" she asked, and before I could get a word in edgewise, she blurted out, "We got tattoos!"

It seemed that after a bout of spontaneous bonding with her younger brother, my mom was now sporting a medium-sized rose on her right shoulder. It's important to interject here that my mom, while an adventurous woman, is not exactly risqué when it comes to her appearance. She's a dean at a midwestern college and wears wool suits to work, goes light on the makeup, and has had the same haircut for about as long as I can remember. To say I was shocked at the idea of my mom baring some ink is an understatement.

I shouldn't have been so surprised. It turns out that one in every eight Americans had a tattoo, according to a Harris Interactive poll conducted in 2003, and that tattooing remains one of the fastest growing retail sectors.

From ritualistic to decorative, tattoos have been around for more than 5,000 years. As one would hope, tattooing techniques have evolved in that time. Yet surprisingly, the ink itself has not changed that much over the past few decades. A solid pigment is suspended in a liquid carrier, which could include any one or some combination of the following: water; witch hazel; alcohols, varying from ethanol to vodka to Listerine; and surfactants, such as glycerin or propylene glycol. When the needle hits the skin, the pigment is injected into the dermis, where it resides in perpetuity.

Beyond that basic concept, however, facts on ink get murky. "The whole world of tattoo ink and manufacturing is kind of mysterious," says A. Peter Morello III, senior principal scientist at Freedom-2, a company that has developed a line of removable tattoo ink.

Though states regulate the sanitation of tattoo parlors, the Food & Drug Administration doesn't monitor the actual pigments used in tattooing, which means there's a dearth of information about what exactly you are putting into your body. Many artists simply buy ink from a commercial distributor and possibly dilute it with water or white ink for artistic effect. Still others, the more "old school" ilk, buy pigments themselves and mix them with carriers to create their own special ink.

The pigments can vary widely from minerals to industrial organics to plastic-based pigments. For example, black inks can be made from iron oxides or carbon, while blues often contain copper salts or cobalt oxides. Meanwhile, white can be achieved with titanium dioxide, zinc oxide, or lead carbonate.

Modern chemistry has opened the door for a wide variety of synthetic pigments and colorants to find their way into the hands of tattoo artists, Morello says. These materials, which can run the gamut from dyes used in cosmetics to industrial paints, can be used to create extraordinarily vibrant colors in a tattoo. But, he adds, they may not have gone through safety testing for use in humans.

It gets more complicated with some of the newer products finding their way into studios: glow-in-the dark or UV-activated inks, which can contain materials such as phosphorus that could be cancerous; temporary tattoos, which are more like body paints that last up to a week; and removable tattoos.

FOR ITS PART, Freedom-2 is relatively transparent about the contents of its removable ink. The company encapsulates a resorbable, cosmetics-and-drug-grade colorant and a biocompatible laser target material in a translucent polymer bead, Morello says. The tattoo wearer is thus primarily exposed to the inert polymer and a much lower level of the pigment.

Freedom-2's technology, which is based on university research that emerged from Harvard and Duke and was later developed at Brown, thus allows the wearer to have a change of heart. After just one treatment with a laser, the polymer bead is safely broken down and the pigment is resorbed by the body. Traditional ink, by comparison, can require months of laser treatments to break down, and the end result is often far from perfect because little is known about what pigment is being broken down.

Freedom-2 is rolling out its first line of removable inks this month. The first colors will be black, white, and gray washes that it says perform on par with the best commercially available ink. The company expects to soon follow up with a more enhanced color palette.

Removable inks are not without their critics. Tattoo artists such as Phuc Tran, owner of Tsunami Tattoos in Portland, Maine, question the logic of impermanent ink. "Tattooing is one of the few art forms that can still elicit a very strong reaction; the strong reaction is a result of the artistry of the tattoo and the 'foreverness' of it," Tran says.

All food for thought for my mother, who apparently is already thinking about her next tattoo. Only a few more years to 60, Mom.

Coatings
YInMn blue pigment from Shepherd goes on the market
Nanomaterials
Making magnetic nanoparticles in a gamut of colors
Materials
Should we write off the idea of rewritable paper?
Share X
To send an e-mail to multiple recipients, separate e-mail addresses with a comma, semicolon, or both.
Title: What's that stuff? Tattoo Ink
Author: Lisa M. Jarvis
Chemical & Engineering News will not share your email address with any other person or company.