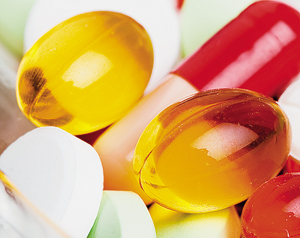 WHEN YOU TAKE a pill, it's not all medicine. It says so right there on the box of your over-the-counter drug—if you are self-medicating—or in the fine print of the patient information sheet for your prescription drug. The listing typically includes some peculiar names: sodium starch glycolate, dibasic calcium phosphate, crospovidone, magnesium stearate, carboxymethylcellulose, methylparaben, and so on. So what is all that stuff?

The answer is "excipients." These are the inactive ingredients that help hold a dose of the active pharmaceutical ingredient (API) together and keep it stable for a long shelf life. Excipients also can serve to mask an unpleasant taste or texture and help ensure that the right amount of the API makes it to the right spot in the body at the right time. Whether it is a tablet, gelcap, liquid, cream, suppository, patch, injection, or inhalant, all medicines contain several excipients—and every one of them is there for a good reason.

For the most part, excipients are by-products derived from the food-processing industry and have been around for a long time, according to Louis Blecher, a retired chemist who specialized in excipients while working for International Specialty Products. "I spent 40 years working on wine, beer, and contraceptives—excipients are used in many products, not just medicines," he says.

Food and beverage additives are widely used as medical excipients because they have already been deemed safe for human consumption and many of them are inexpensive, Blecher says. But that also means there is nothing very new and exciting with excipients. Pharmaceutical companies tend to pick excipients that work well for their products and stick with them, generally for the entire patent life of a drug, he notes. One reason is that if a company wants to change a formulation, it has to go back to the Food & Drug Administration for approval.

Excipients are nothing to sneeze at, mind you. The global market value for this class of chemicals was $3.5 billion in 2006, according to an industry report by BCC Research. The market value is expected to reach $4.3 billion in 2011.

FDA has approved several hundred additives for medicines, with most of them aimed for use in making tablets and capsules. There are 40 official categories, including acidifying agents, antifoaming agents, buffering agents, emulsifying agents, antioxidants, pigments, and dessicants.

Despite this diverse array of items, most medicines contain just a few basic types of excipients, says Eugene F. Fiese, a pharmaceutical industry consultant who served as 2007 president of the American Association of Pharmaceutical Scientists.

For example, diluents or fillers help bulk up the size of a tablet or capsule so it's practical to make and convenient to take, Fiese explains. These excipients also can serve as a binder to hold all the ingredients in a formulation together. Some popular choices for diluents and binders are lactose, magnesium stearate (a type of fatty acid), dibasic calcium phosphate, cornstarch, and microcrystalline cellulose or modified cellulose (such as carboxymethylcellulose). In the case of water- or alcohol-based liquids, thickening agents such as gelatin or polyethylene glycol are used.

Glidants or granulating agents are important chemicals added to an API to generate a nice free-flowing granular material—more like salt or sugar than flour, Fiese says. This is a critical property to ensure that the API stays uniformly dispersed within the powder formulation for reproducible doses and that the formulation will slide easily into gelatin capsules or into dies to be pressed into tablets on high-speed machinery. Different types of granules that dissolve at different rates also can be important for time-release formulations.

Magnesium stearate and carboxymethylcellulose are usual choices to impart these needed properties, Fiese notes. Some other examples include talc and silica. Magnesium stearate, talc, silica, and hydrogenated vegetable oil also serve the function of an antiadherent or lubricant, which helps prevent the pressed tablets from sticking to the punch faces of the tableting machines.

COATINGS PROTECT the pressed tablets or capsules from moisture and photodegradation to help extend shelf life, make unpleasant-tasting medicine bearable, make larger pills easier to swallow, and permit printing drug information. Sugar coatings were once common, Fiese says, but nowadays a synthetic polymer or polysaccharide coating is used, with plasticizers such as triethyl citrate and pigments thrown in.

Coatings also are important to help control the rate of release or the location in the gastrointestinal tract where the drug is released, Fiese points out. For example, a coating can be designed to survive the low pH in the stomach but readily dissolve in the more neutral pH of the intestines for better absorption, he explains.

Disintegrants are another key type of excipient. These are reagents that expand and dissolve when wet, causing a tablet to fall apart. Without a disintegrant, a tablet might travel all the way through the digestive system as a lump and never completely be absorbed, Fiese says. Some binders, such as cornstarch and modified cellulose, are also good disintegrants. But better disintegrants include sodium starch glycolate and polyvinylpyrrolidone (crospovidone).

Finally, sweeteners and flavorings are added to improve taste or "mouth feel" of some medicines, especially chewable tablets such as antacids or liquids such as cough syrups. Most antibiotics taste awful, Fiese says, so a strong, fun flavoring is often used for children's formulations designed to be mixed with water. As Mary Poppins sings: "A spoonful of sugar helps the medicine go down, in a most delightful way."

Nutraceuticals
Polymer particles protect micronutrients to fortify food
Food Science
What's chocolate, and how does its chemistry inspire such cravings?
Pharmaceuticals
Prescribed Routes: Final Drug Form And Delivery Route Affect Function And Use
Share X
To send an e-mail to multiple recipients, separate e-mail addresses with a comma, semicolon, or both.
Title: What's that stuff? Excipients
Author: Stephen K. Ritter
Chemical & Engineering News will not share your email address with any other person or company.