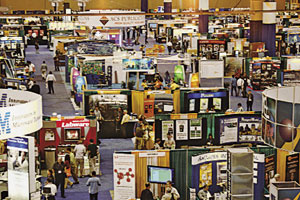 For the first time in the 100 years since the American Institute of Chemical Engineers (AIChE) was formed as an entity separate from the American Chemical Society, the two organizations held their national meetings together. The joint meeting was held in New Orleans, a city still suffering from the devastation of Hurricane Katrina, which struck the Gulf Coast in 2005.

Speaking to the ACS Council, ACS President Bruce E. Bursten said, "I'm sure that many of you share my great sense of pride that our ACS stood by this wonderful city after the tragedy of Katrina. We did the right thing as we always try to do." The city's famed French Quarter and Warehouse Districts, where the meeting was held, have nearly completed their recoveries.

The meeting hosted 13,454 participants, including 6,652 attendees and 4,636 students as well as those in other registration categories. The exposition contained 482 booths with 319 exhibitors, and 15 workshops were presented there.

Two major presidential sessions were held in the areas of science education and the future of energy. The energy symposium was a joint effort with AIChE, and its keynote was given by Undersecretary Raymond L. Orbach, director of the Office of Science at the Department of Energy (see pages 3 and 11).

At their meetings, the ACS Board and Council heard reports from society officers and committee chairs. On recommendation from the Committee on Public Affairs & Public Relations, the board approved the tagline "Chemistry for Life." This tagline will be the central theme in ACS communications and will be featured on most ACS products. It is one component of a campaign to establish ACS as a recognizable brand.

The Society Committee on Budget & Finance (B&F) reported that ACS is in sound financial shape, having ended 2007 with a net contribution from operations of $9.6 million on revenues of $444.2 million and expenses of $434.6 million. This was $2.2 million favorable to the approved budget. After including the results of the Member Insurance Program and new ventures, the society's overall net contribution for 2007 was $10.7 million, which was $5.4 million favorable to the approved budget. B&F also voted to recommend to the council that the dues for 2009 be increased by $4.00 to the fully escalated rate of $140, which the council approved.

In its most far-reaching action, the ACS Council paved the way for students, including undergraduates, to become full ACS members with voting rights. To do this, councilors approved an omnibus petition that included extensive changes to the society's constitution and bylaws. The changes must be ratified by the ACS Board and the ACS membership before becoming effective.

From a field of four nominees, the council chose Joseph S. Francisco, William E. Moore Distinguished Professor at Purdue University, and Josef Michl, professor of chemistry and biochemistry at the University of Colorado, Boulder, to vie for the role of ACS president-elect in 2009. Councilors were also informed of the results of elections for candidates for directors of Districts III and VI. These elections will be held in the fall.

Careers
Chemists Convene In New Orleans
Policy
Chemists Convene In San Francisco
Policy
Board, Council Meet In Washington
Share X
To send an e-mail to multiple recipients, separate e-mail addresses with a comma, semicolon, or both.
Title: ACS Meets In New Orleans
Author: Linda Raber
Chemical & Engineering News will not share your email address with any other person or company.