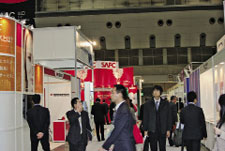 Japanese pharma traditionally has been conservative in sourcing ingredients. Although not unknown, reliance on parties beyond a small circle of suppliers was rare. Changes in Japan's regulations, however, raised outsiders' hopes of breaking through the circle (C&EN, May 15, 2006, page 29). That hasn't happened as quickly as outsiders had anticipated, but they are not discouraged.

Takuya Yamamoto, of trading company Koa Shoji, said drug companies are still looking at the same suppliers, but he expects the pool to increase eventually. Similarly, Jagmohan M. Khanna, of Indian contract manufacturer Jubilant Organosys, predicted that "the Japanese market is going to open up gradually because of costs."

According to Yamamoto, Europeans have an edge among foreign suppliers. "They already know about quality and are easy to trust," he said. They are also familiar with drug master files, the data that Japanese law now requires companies to submit for APIs.

European firms themselves tout these qualities: regulatory experience, reliability, and a deep understanding of quality's primacy. As Wilhelm Stahl, head of Saltigo's pharma business, put it, "If you have quality issues, you have a big mess." Still, Stahl admitted that breaking through in Japan will take time. "With Japan, one has to take a long-term view," he said.

Because of difficulties that can arise from cultural differences, Japanese will always prefer to work with Japanese, contended Ichiro Shinkai, of Beta-Chem, a chemical development arm of Mitsui & Co. Foreigners would do well to adapt Japanese business ways, he said.

Almac, a Northern Irish pharma services firm, heeds the advice. Companies can fail in Japan for boorishness, according to David Moody, vice president of commercial operations. Almac has made inroads in the country partly through the respectful demeanor of the people it sends there, he claimed. The cultural sensitivity has reaped projects that are small but have growth potential, added Rosaleen McGuckin, vice president of business development.

Business
China Emerging As  Pharmaceutical Chemical Market
Business
Flocking To Japan
Pharmaceuticals
Contract Pharma Grows In China
Share X
To send an e-mail to multiple recipients, separate e-mail addresses with a comma, semicolon, or both.
Title: Courting Japan
Author: A. Maureen Rouhi
Chemical & Engineering News will not share your email address with any other person or company.