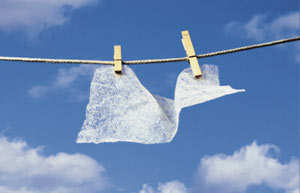 The wash cycle is complete. You toss your wet laundry into the dryer and chase it with a dryer sheet. Most people don't know how the thin sheets freshen and soften clothes or that they were developed by a chemist who wanted to help his wife out with the laundry.

In the late 1960s, Conrad J. Gaiser and his wife, Audrey, lived on the top two floors of a four-story duplex. Their laundry room was on the ground floor, and every time Audrey would wash a load, she had to run down the stairs to catch the final rinse cycle in order to add fabric softener. Liquid fabric softeners, which are commonly cationic, can't be mixed with detergents, which are anionic, because the mixture forms a precipitate.

Conrad, who had worked for a number of years in the soap and detergent industry, wanted to make his wife's life easier and got to work producing the first known dryer sheet. Laurel Gaiser, Conrad's daughter, tells C&EN how her father applied fabric softener to a piece of cotton flannel, likely from her mother's sewing room. He named his prototype Tumble Puffs, Laurel says.

In 1969, Conrad received a U.S. patent for this invention, and shortly thereafter he sold the rights to Procter & Gamble, which then marketed the product as Bounce dryer sheets.

The first version of the product had several problems, including getting trapped in the lint vent and distributing the softener unevenly onto clothes, says Gordon F. Brunner, who was P&G's associate director of research and development at the time. The company ironed out the wrinkles and launched the product nationally in 1975.

Today, many competing brands of dryer sheets are available. Each brand uses a slightly different formulation to achieve three primary goals: to soften clothes, to prevent static cling, and to deliver a fresh scent.

Most dryer sheets are made from a nonwoven polyester material coated with a softening agent that has a long hydrophobic chain. Fatty acids, fatty alcohols, and alcohol ethoxylates are all possible softening agents. P&G uses quaternary ammonium salts of fatty acids as its primary softening agents, whereas Unilever, which produces Snuggle dryer sheets, uses a stearic acid.

During tumble drying, the coating containing the softener melts and the compounds get transferred onto the fabrics being dried. The newly attached fatty chains give the fabric's surface a slippery feel, which people interpret as softness. The compounds also help dissipate static charge by lubricating and increasing the surface conductivity of the fabric fibers.

It's important that the softening agents have a relatively high melting point, notes Bien Santos, section head in products research at P&G. If the melting point is too low, "it will make your sheet very sticky inside the box, and you don't want that," Santos says. "What you want is something that's solid at room temperature and either softens or melts inside the dryer so you can effectively transfer it onto clothes."

Some dryer sheets also contain small amounts of inorganic compounds—such as montmorillonite, a naturally occurring calcium clay—that help control the viscosity of the fabric softener coating as it begins to melt in the dryer. "You don't want it to come off the nonwoven sheet too quickly, or you might have streaks of softener actives on some parts of the clothes and none on others," Santos says. "You want it as evenly distributed as possible."

Aside from providing softness and preventing static cling, dryer sheets also deliver a fresh scent to laundered clothes. This is done by adding fragrance molecules to the softener coating. Jack Linard, senior manager of scientific and regulatory affairs at Unilever, says that one challenge in developing dryer sheets is to minimize the amount of fragrance molecules that are lost through evaporation during the high-heat manufacturing process and in the dryer.

P&G staves off the degradation of fragrance molecules by encapsulating the molecules in cyclodextrins. In the dryer, water molecules evaporating from wet clothes help release the perfume molecules from the cyclodextrin carriers, according to Günter Wich, corporate R&D director of biotechnology at Wacker Chemie AG, the company that produces cyclodextrins for P&G.

These days, dryer sheets are no longer just used in the dryer. Consumers use the sheets for everything from polishing shoes to keeping mosquitoes at bay. P&G even has a website devoted to the off-label application of dryer sheets. Whether all the alternative applications are based on sound science is left to the reader's discretion. But one thing is for sure: The chemistry in the seemingly simple sheet packs in a lot of potential.

Comments
Doug LaFave (April 23, 2013 7:53 PM)
The chemicals in dryer sheets are toxic. creating and buying these pointless items is a waste of money and resources. I get a severe reaction anytime i am near clothing that has been treated with these pointless chemicals. Do not buy dryer sheets. Is it worth hurting yourself those around you so you can smell a fake fragrance on your clothing?
Reply »

Beverly Harris (November 2, 2013 5:11 PM)
I agree. Do not buy these. We are overwhelmed by the sickeningly sweet smell of our neighbor's laundry. It has caused us headaches, coughing, etc. We seldom can even smell the roses in our yard since the fabric softener smell overwhelms any natural odors. Awful stuff. Toxic. Bad for the community.
Reply »

cari schofield (November 21, 2013 7:04 AM)
Dryer sheets create an unseen film over your lint filter trap that causes the heat to not flow out properly shortening the life of your dryer by years. It can be washed off but most people do not know about so they never clean the lint filter trap collecting the lint.
Reply »

Diane Cameron (July 8, 2016 5:38 PM)
I agree with the comments above that point to the toxicity and objectionable quality of the fragrance emanating from dryer sheets. Some of the chemicals used in dryer sheets are reportedly listed as neurotoxins. Although the industry may point to consumer choice, their chemicals by design are persistent in the environment. When our neighbors use dryer sheets, their air emissions waft beyond their property line, and pollute the clean air in our own backyard.
Reply »

Lea Cameron (June 19, 2017 9:02 PM)
Is it possible to forward this entire article about dryer sheets? One of my 3 sisters won't ever do laundry without using them. She lives on a farm. I love drying clothes on the clothesline, both in town then again when we moved back to the country. Our Bed & Breakfast guests love the fresh air scent of the sheets; I pop bathsheet towels into the dryer for a few minutes only to soften them. No dryer sheets ever in our home!
Reply »