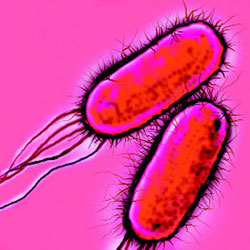 When the popular press writes about the emergence of "superbugs," bacteria that resist all of the weapons in the antibiotic arsenal, public enemy number one is always methicillin-resistant Staphylococcus aureus (MRSA).

The gram-positive bug lends itself to sensational headlines given the thousands of cases of infection reported each year, including those of otherwise healthy young people. But industry observers say a bigger problem of antibiotic resistance lies in gram-negative organisms, which tend to strike the very old, the very young, and the very sick.

"These are people who are in the hospital and have a lot of other things wrong with them," says George Talbot, who has worked on the development of infectious disease drugs at both big and small pharmaceutical companies and now serves as a consultant to the industry. What is making doctors nervous is the woefully thin pipeline of drugs to treat these infections versus the comparatively robust cache of drugs to treat gram-positive organisms.

The epidemiology of hospital infections has a natural cycle. Decades ago, when Talbot was doing his residency and internship in the University of Pennsylvania hospital system, doctors were concerned that some types of gram-negative bacteria were showing resistance to available medicines. Big pharma responded, new drugs were developed, and their fears gradually subsided.

Several strains of gram-positive organisms are, indeed, showing resistance to some agents in the U.S., but an adequate stream of drugs flowing through the pipeline should address future need, says Robert C. Moellering Jr., professor of medical research at Harvard Medical School. As such, he notes that the urgency for new drugs is probably somewhat overstated by news reports. An "it could happen to you" perception exists for MRSA that has probably reinforced fears, Talbot adds.

The pipeline of new drugs for treating gram-negative bacteria, on the other hand, carries just a trickle. "While we all had our attention focused on MRSA, these other gram-negative bugs started to rear their ugly heads," says Paul Miller, head of antibacterials research at Pfizer.

Although few people have died because of untreatable gram-negative infections, "the fact that we're seeing any of these is a concern," Moellering says.

Stuart Levy, cofounder of Paratek Pharmaceuticals and director of the Center for Adaption Genetics & Drug Resistance at Tufts University, agrees. "There's absolutely no question that gram-negatives are the threat of today," he says. "The gram-positives and MRSA may be called superbugs because of their virulence and resistance, but there are still drugs to treat them."

Levy points to a number of gram-negative bacteria, particularly Pseudomonas aeruginosa and Acinetobacter baumannii, that are susceptible to only one drug—or in some cases no drugs. 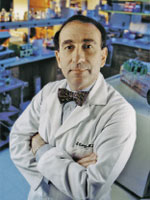 The lack of new drugs to treat gram-negative bacteria, doctors say, has a basis in both business and science. On the business side, these drugs will treat a smaller patient population than broad-spectrum antibiotics and, like all antibiotics, are taken for a finite period. The limited market and tough target add up to an uninteresting business opportunity for many companies.

If something as innocuous as a stain can't penetrate the cell, imagine trying to develop a molecule that not only has to get in but then kill the bacteria, points out Chet Metcalf, senior medicinal chemist at Cubist Pharmaceuticals. To do its job, an antibiotic needs to get past an outer membrane, the cell wall, and then an inner membrane. The challenge is the outer membrane.

That membrane is covered with lipopolysaccharides—lipids that act as a permeability barrier—and it is packed with efflux pumps that eject the antibiotic from the cell. Gram-positive organisms, on the other hand, lack the outer membrane and have fewer ways of kicking a drug out.

Worse, gram-negative bacteria excel at making enzymes that can inactivate drugs. For example, β-lactamases, enzymes responsible for resistance to β-lactam antibiotics such as penicillins and cephalosporins, are becoming a problem, Talbot says. In some parts of the world, bacteria making those enzymes are beginning to extend beyond the hospital and into the community at large. "This is a big concern, even for treatment of more routine infections, such as urinary tract infections," Talbot adds.

Given the many barriers that gram-negative bacteria put up, natural products offer the best solution for attacking them, researchers say. The problem is that natural molecules active against gram-negative organisms are hard to find. According to Pfizer's Miller, if a chemist were to screen a library of 10,000 promising compounds against both P. aeruginosa and the gram-positive bacteria S. aureus, anywhere from 10 to 100 molecules would likely be active against S. aureus but only one against P. aeruginosa.

Then, when a molecule does show promise in killing gram-negative bacteria, it is likely to be more toxic than molecules active against gram-positive organisms. "The kind of potent things you find initially that kill Pseudomonas also kill Staphylococcus because they're simply punching holes in the organism," Miller says. That's a failing strategy, he adds, because it usually means the compound will "punch holes in every living thing it can find."

This all adds up to a tough chemistry challenge for drug developers. "Nature isn't trying to make a compound with pleasant medicinal characteristics as its first step," observes Thomas R. Parr, chief scientific officer at Targanta Therapeutics.

The challenge also explains the anemic industry pipeline of drugs to treat gram-negative infections. "There are a slew of gram-negatives that are threats and nothing of great merit in the pipeline," Paratek's Levy acknowledges.

Yet nearly every company in the anti-infectives arena claims to be in the early stages of developing compounds active against gram-negative bacteria. "Everybody is looking, and so are we," says Cubist's Metcalf. Cubist is moving a gram-negative program forward, although Metcalf won't provide details about its therapeutic approach.

Optimer Pharmaceuticals says it is looking at developing an agent against Pseudomonas. Replidyne is interested in the area but is not pursuing a specific compound. Nebojsa Janjic, Replidyne's chief scientific officer, notes that the company's lead drug candidate, feropenem, does show activity against some gram-negative organisms.

Pfizer has one compound, an oral sulopenem, in late Phase I trials that it hopes to advance to Phase III tests within the next year, Miller says. Though the drug does not belong to a new class of antibiotics, its oral availability is an improvement over existing penems, which are all administered intravenously. Given rising medical costs, hospital officials are eager to give oral drugs that allow them to get patients out of intensive care, if not the hospital, sooner, Miller notes.

Earlier-stage research at Pfizer is aimed primarily at treating drug-resistant infections in the hospital. "The majority of our research right now is really focused on trying to find brand-new classes of agents that work against these resistant gram-negative organisms," Miller says.

Paratek is taking two approaches to dealing with gram-negative bacteria. The first is to come up with a classic antibiotic or two-drug combination that can wipe out the offending organisms. Because resistance is closely linked to the efflux pumps in the membrane, Paratek is pursuing molecules that could block the pumps and render the cell vulnerable to tetracycline or one of its derivatives.

The company's second strategy is to find small molecules that block the "multiple adaptational response" operon, a set of genes that together act as a master switch that controls the expression of roughly 80 proteins. Turning that switch on makes the organism virulent, and Paratek is trying to develop a vaccinelike compound, rather than an antibiotic, that would target that switch. The "acute vaccine" would be given to at-risk patients—those in the intensive care unit, for example—to prevent infection from even starting.

Paratek now has three proof-of-concept models showing that treating a patient before the disease strikes is effective. "This pill with no antibacterial activity enfeebles the organism and prevents Pseudonomonas from causing infection," Levy says. The company is seeking funding to start preclinical studies.