Although they have much to worry about, petrochemical makers remain optimistic 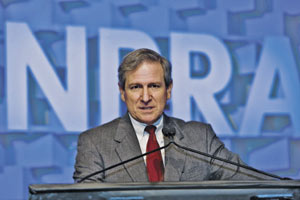 At the annual petrochemical industry meetings held late last month in Texas, high energy costs and a sluggish economy were at the top of the agenda, followed by plenty of the usual fretting about looming Middle Eastern plants. Despite the ominous outlook, petrochemical makers were upbeat.

The event's keynote speaker was Sherman J. Glass Jr., who until recently was a senior vice president at ExxonMobil Chemical. Now president of ExxonMobil Refining & Supply, he gave his assessment of energy and petrochemical markets in the coming decades.

Between 2005 and 2030, as the world's population grows by 30% and its economy doubles, energy demand will increase by 40% to 325 million barrels per day on an oil equivalent basis, Glass said. "Clearly, a wide variety of energy resources will be needed to meet this increased demand," he said. "But fossil fuels—oil, natural gas, and coal—are the only energy sources of sufficient scale, flexibility, and affordability to meet the majority of the world's energy needs."

Glass said fossil fuels will continue to supply about 80% of the world's energy over the period. Despite high growth for energy sources such as biofuels, wind, and solar, these alternatives will account for only 2% of energy in 2030, up from 0.5% today.

Global chemical demand, meanwhile, will increase by an annual rate 2% above overall economic growth through 2030. Some 60% of this growth will come from Asia, particularly China. In this, Glass's company sees opportunity. ExxonMobil Chemical is doubling capacity at its Singapore chemical complex by 2011 and is planning a refining and petrochemical project with partners Saudi Aramco and Sinopec (China Petroleum & Chemical Corp.) in Fujian, China.

Although demand will grow, supply will too. At a conference held by consulting group Chemical Market Associates Inc. in Houston the week before the NPRA meeting, CMAI President Gary Adams said the current era of prosperity for petrochemical makers will begin to slip away as new production capacity opens in the Middle East. "By late 2008, it will start to be evident that markets are softening," he said.

Indeed, Adams said petrochemical makers should be worried that their profits are already being eroded by high energy and feedstock costs. However, he expects that the chemical industry trough will be a relatively short and mild one, and he foresees a recovery by 2012.

Petrochemical consultancy DeWitt & Co. also held a conference the week before NPRA. There, T. Kevin Swift, chief economist for the American Chemistry Council, painted a dark economic picture for U.S. chemical makers. The good news is that, owing to a weak dollar, chemical exports from the U.S. have been strong. Yet falling home prices and rising energy costs, he said, are cutting into consumer spending. "The hard evidence suggests that we are in a recession," he added.

"The rest of the world may get the sniffles from the U.S. getting the recessionary cold," he said. U.S. troubles aside, Swift expects the global economy to expand by more than 4% in 2008.

Although oil and natural gas continue to be the chemical industry's main raw materials, some in Texas offered alternatives. At the CMAI conference, J. Brian Ferguson, chief executive officer of Eastman Chemical, challenged the conventional wisdom that places like the Middle East and Trinidad will have a large chemical production cost advantage far into the future.

As evidence, Ferguson offered up two Eastman-backed projects on the U.S. Gulf Coast to make ammonia and methanol by first gasifying petroleum coke, a coallike by-product of oil refining, into the chemical raw material syngas. "Eastman can match and beat products produced overseas with advantaged raw materials," he said.

Gasification is being seriously considered elsewhere in North America as well. At an event during the NPRA meeting sponsored by Canadian government officials, Fred du Plessis, a consultant with Kline Group, presented the results of his study on using coke gasification to make chemicals in Alberta.

Du Plessis projected that some 3 million bbl per day of bitumen extracted from the Northern Alberta oil sands will be refined into fuels by 2015. Because this process yields about 50% of "bottoms" that are converted into coke, refiners will face a large coke surplus that cannot be exported economically. "It may seem like a problem ... but we see that as the key to gasification technology," he said. By 2015, du Plessis argued, Alberta could establish an integrated site that converts coke into chemicals such as urea, acetic acid, vinyl acetate, methanol, olefins, and polyolefins.

Today's petrochemical managers are wary of expansions based on cheap Middle Eastern natural gas. But if visionaries such as Ferguson and du Plessis have it right, the executives of the future may instead be complaining about too much production from cheap North American coke.

Business
A promising petrochemical prognosis
Business
Volatility returns to petrochemicals
Sustainability
Chemical Outlook 2015 By Region
Share X
To send an e-mail to multiple recipients, separate e-mail addresses with a comma, semicolon, or both.
Title: Petrochemical Futures
Author: Alexander H. Tullo
Chemical & Engineering News will not share your email address with any other person or company.