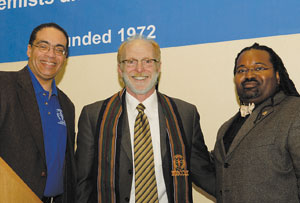 NOBCChE is "a family affair," says Victor R. McCrary, the organization's president. Indeed, the National Organization for the Professional Advancement of Black Chemists & Chemical Engineers (NOBCChE) is a family—a family of scientists, a family of colleagues, and a family of people with a common interest: to nurture, promote, and celebrate the work of black scientists. Held in Philadelphia last month, the organization's 35th annual conference was a family reunion that drew a mix of more than 700 scientists, educators, industry professionals, and students.

"What makes NOBCChE unique is that we care for each other," McCrary, business area executive for science and technology at the Johns Hopkins University Applied Physics Laboratory, told C&EN. He pointed to the organization's tradition of conveying summer internship opportunities to students, finding employment opportunities for members who have lost their jobs, discussing workplace challenges, debating new ideas and innovations in chemistry, and helping newly appointed faculty members understand the tenure process. Because of this support network and the opportunity to come together, "many of our members feel they are 'coming home' when they come to a NOBCChE conference," he added. "And when you come home, you are with family."

As families grow, so does NOBCChE. Welcoming new kin into the fold with the bestowing of the organization's signature kente cloth—a tradition with roots in Africa—now has become a tradition at the NOBCChE annual conference. Several speakers and guests received the colorful cloth in Philadelphia, including Pennsylvania Gov. Edward G. Rendell and American Chemical Society President Bruce E. Bursten.

Each conference begins with the Henry Hill Lecture, an event cosponsored by the ACS Northeastern Section. Hill was a renowned polymer chemist and the only African American to be president of ACS. To celebrate his legacy, NOBCChE invites eminent black scientists to discuss their work and achievements.

James E. West, a professor of electrical engineering at Johns Hopkins University, offered this year's address. West co-invented the electret microphone, an achievement that in 2006 earned him the National Medal of Science & Technology, the highest honor awarded by the President to the U.S.'s leading inventors and technological innovators. An electret is a ferroelectric material that has been permanently polarized. These microphones account for 90% of the 2 billion microphones produced annually and are found in items such as telephones, hearing aids, camcorders, and multimedia computers. Often recognized as the first black person to make major contributions to the telecommunications industry, West is the third African American inductee into the National Inventors Hall of Fame.

West's lecture highlighted the achievements of black scientists and encouraged the audience to nurture the creativity and inventiveness of young people. "Most of you, as with me, can identify that single element in your life that changed your direction from something else to science," he said, adding that "mentoring is very vital and very important to success" and has made all the difference in his career.

This year, NOBCChE returned to the city of its birth. In 1972, the organization was founded in Philadelphia by seven chemistry and chemical engineering professors who wanted to offer another voice to the science community. Cofounder William M. Jackson, professor emeritus at the University of California, Davis, remembered that when the group gathered for its first meeting, the intent was to "build an organization that would present to the public, to the government, and to the powers that be a point of view from black scientists, particularly chemists and chemical engineers." He added that the founders wanted to raise "current issues and problems we thought needed to be solved."

Since that time, NOBCChE has provided more than $750,000 in scholarships, fellowships, and awards for chemical sciences students and professionals. The organization now has members worldwide, as well as 21 regional chapters and 40 student chapters across the U.S. It lobbies Congress, assists historically black colleges and universities to meet equipment and resource needs, and engages grade school and high school students in science activities. Although not all of these students will enter the science profession, Jackson said, "involvement is what we were looking for," and "chemistry is a wonderful basis for a great number of careers, from law school to everything else. It teaches you to think in a quantitative way about complex problems."

More than 200 technical papers are presented at the annual conference, and professional development workshops are conducted. Jackson added that in addition to the organization's grassroots and congressional efforts, "one of the things we wanted to do was recognize minority, African American scientists."

In her award symposium address, Haynie discussed her research team's efforts to immobilize antimicrobial peptides on common household surfaces, protective garments, and medical implants. Offering examples from when female basketball teams had to play by "girls' rules" until 1972, she urged young female scientists to achieve and succeed no matter what the rules may be.

The importance of women's contributions to the science community featured prominently in the preconference activities. For the third year, NOBCChE and the Committee on the Advancement of Women in Chemistry (COACh) worked together to help women overcome workplace and academic obstacles and advance as leaders in the chemical sciences. 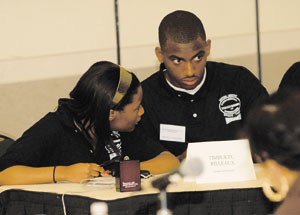 About 15 midcareer women from academia, industry, and government participated in a daylong session titled "The Chemistry of Leadership." Participants described the gathering as warm, engaging, and replete with tangible resources. Peppered with candid and animated discussions about race, gender, power dynamics, and the perceived roles and characteristics of women in leadership positions, the session allowed participants to share coping strategies and gather resources that will help them advance as leaders.

One way the organization strives to keep its family whole is to address health issues in the black community. A unique aspect of a NOBCChE meeting is its Health Symposium, an event open to the public at large. In past years, symposia have addressed depression, obesity, and diabetes.

This year's symposium, "AIDS/HIV in the African American Community: Addressing an Epidemic," highlighted the impact the disease has had on the black community. AIDS and HIV disproportionately affect minority groups in the U.S.; the Centers for Disease Control & Prevention has estimated that blacks account for approximately 49% of all new diagnoses.

The panel of doctors, scientists, and community advocates discussed the impact of the disease on the nation and the world. Gary J. Bell, executive director of Philadelphia-based Bebashi-Transition to Hope, a full-service HIV/AIDS case management agency, noted that "AIDS is probably the greatest tragedy to strike people of African descent." His organization offered free screening for attendees.

The cultivation of future scientists is also a cornerstone of the annual conference. During the week, more than 50 industrial and academic representatives participated in a one-day career fair, which was free of charge to all. The fair provides a forum in which professionals in the fields of chemistry and chemical engineering explore career opportunities, internships, and graduate programs. Attendees took part in on-site interviews and discussed career goals with participants.

The week was capped off with a day-and-a-half-long national science fair and science bowl competition for more than 125 middle and high school students from across the U.S. David McMillon, a senior at Barbara Jordan High School in Houston, took first place in the science fair's senior division (grades 10–12). Eighth-grader Owais Ansan from Saginaw Arts & Sciences Academy in Saginaw, Mich., took home the top prize for the junior division (grades seven through nine).

As part of an ongoing partnership between ACS and NOBCChE, ACS sponsored several events during the meeting, including the workshop "Managing an Effective Job Search" and the science fair luncheon. Delivering the luncheon address, Bursten reminded the gathering of students, parents, and teachers about "the centrality of chemistry and the centrality of African Americans in chemistry," and he urged the students to continue their scientific pursuits.

As the NOBCChE family continues to grow and face new challenges, the state of the organization is "extremely healthy," McCrary says. Noting some of the year's accomplishments, he announced the launch of the redesigned NOBCChE website and the appointment of Ella L. Davis, a former NOBCChE president, as interim executive director.

In addition, the group has begun a tradition of recognizing and engaging organizations that help it achieve its goals. This year, NOBCChE presented its first-ever Corporate Support Award to Rohm and Haas in recognition of the company's work in fostering young people's interest in chemistry. Through its Undergraduate Research Awards, the company has provided financial stipends totaling approximately $180,000 to award-winning students since 1996.

NOBCChE has also formed a groundbreaking educational partnership with the University of Maryland department of chemistry and biochemistry. The university promised to commit to recruiting and supporting minority graduate students and to contribute $15,000 to NOBCChE over the next three years. NOBCChE will provide the university with membership benefits, prospective students, and conference sponsorship opportunities.

During the remainder of his term, McCrary says he would like to see "a greater NOBCChE presence throughout the various segments of the chemical industry and the recognition of NOBCChE as a voice on science policy and innovation." He would also like to see the organization "continue its dialogue with and open its doors to African scientists and scientific societies."

Thirty-five years after NOBCChE's founding, the family that seven scientists helped to create continues to shape the legacy of people of color in science. "NOBCChE's legacy will be the future generations of African Americans and other people of color who fill the global ranks of professionals, professors, high school teachers, and government workers who strive for excellence in science and engineering," McCrary noted. He added that through their contact with NOBCChE, these generations will be "dedicated each day in some small way to make a positive difference for their fellow human beings. And there will be someone somewhere saying, 'I am here today because of NOBCChE.' "

More On This Topic

Careers
Finding the next step at NOBCChE
Careers
Encouraging Next-Gen Chemists
Safety
Dow Partners With Chemistry Teacher Group
Share X
To send an e-mail to multiple recipients, separate e-mail addresses with a comma, semicolon, or both.
Title: Brotherly Love, Sisterly Affection
Author: Alicia J. Chambers
Chemical & Engineering News will not share your email address with any other person or company.