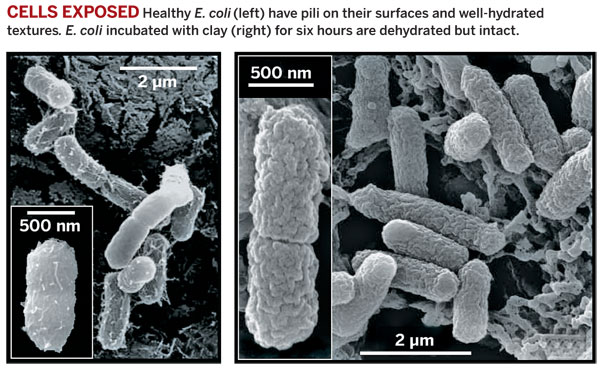 Buruli ulcers can get nasty. Caused by a flesh-eating mycobacterium found on the Ivory Coast of Africa and in other places, the ulcers are often unaffected by antibiotics and require painful surgery or skin grafts. The late French humanitarian Line Brunet de Courssou successfully treated numerous patients with these ulcers by using poultices of wet clays found in France. She carefully detailed her observations of her African patients, but she was not a scientist. So her son queried members of the Clay Minerals Society electronic mailing list for help figuring out how the clays healed the skin infections.

The query caught the attention of Lynda Williams, a geochemist at Arizona State University, Tempe. She met with Brunet de Courssou in France shortly before she died in 2006 and saw the photos documenting the recoveries. To investigate the healing clays, Williams teamed up with Shelley E. Haydel, a medical microbiologist at ASU, to study the clays' antibacterial properties.

Although people have used natural clays for treating indigestion, intestinal ailments, and wounds for centuries, the ASU researchers are among the first to scientifically probe why some natural clays kill pathogens and heal infections and others do not. As antibiotic resistance grows, understanding the mechanism of this antibacterial activity could lead to the design of new antibacterial agents and therapeutic topical treatments.

Williams and Haydel found that one type of iron-rich French clay could utterly annihilate pathogens such as Escherichia coli, Salmonella typhimurium, and Pseudomonas aeruginosa. It also killed an antibiotic-resistant strain of E. coli and inhibited methicillin-resistant Staphylococcus aureus, an infectious scourge for many hospitals (J. Antimicrob. Chemother. 2008, 61, 353).

The researchers searched the world for more antibacterial clays. They found two iron-rich clays with promising properties from U.S. sources. Earlier this month, Haydel presented the results of their studies on the two American clays at the American Chemical Society's national meeting in New Orleans during sessions cosponsored by the Clay Mineral Society and ACS's Division of Geochemistry.

Haydel described how she and Williams screened dozens of clay samples from both commercial and natural sources around the world for antibacterial activity against bacteria grown in aqueous suspensions. Two clays, one from Oregon and one from Nevada, demonstrated high levels of bactericidal activity against the same pathogens as the French clay.

The clays reduced bacterial counts by ≥99.9%—the clinical definition for labeling consumer products as antibacterial.

Haydel also described testing the lethality of the leachates, or the components of the clay that dissolve in water. The leachates from the American clays completely killed E. coli within 24 hours. She added, however, that the leachates' effectiveness against the bacterium decreased over six months.

In a poster presentation at the meeting, Tanya Borchardt, a graduate student in Haydel's lab, showed how clay minerals might affect the cellular content of bacteria. She displayed transmission electron microscopy images of unique open spaces that appeared in E. coli cells 24 hours after the cells were treated with the leachates. Haydel and Borchardt suspect that the voids are empty spaces because the cells' double-layer outer membrane remains intact. Haydel's group plans to do additional experiments to assess cell membrane integrity upon exposure to clay minerals and leachates.

Any natural sediment consisting of particles less than 2 µm in diameter is classified as a clay. But the chemical composition of clays varies even within a sample and is often difficult to figure out, says Alanah Fitch, a professor of chemistry who studies clays at Loyola University in Chicago. Within a given clay are, for example, quartz, feldspar, carbonates, and other minerals such as silicate sheets. Molecules can get absorbed in those sheets. In addition, clays are hard to analyze even with sophisticated methods: The surfaces can become charged or hydrated in various places, or the clays may exhibit entirely different behavior at the edges compared with that at the center of the sheets, Fitch adds.

Amanda Turner, an undergraduate student majoring in chemistry and geology at ASU, is working with Williams to help clarify whether the mechanism of the antibacterial activity in the two American clays is physical or chemical.

At the meeting, Turner described her use of electron microscopy to monitor how the American clays affected the cell morphology of the pathogens. She observed that E. coli cells incubated with clay remained intact, although they exhibited uncharacteristically rough surfaces, which suggests the clays might have been desiccating the cells.

Then, to learn something about the chemistry that might be responsible for antibacterial activity, Williams and Turner conducted elemental analysis of the American clays and examined pH and oxidation potential of the clays and leachates. They reported that the pH and oxidation potentials were either extremely high or extremely low and that elements known to display antibacterial effects—such as copper, silver, and zinc—are not particularly abundant in the two American clays. They concluded, therefore, that pH and oxidative potential could play a role in stabilizing the chemical species that might be responsible for antibacterial activity.

The researchers also probed the cations present in the leachates by using cationic exchange and inductively coupled mass spectrometry. They found that the clay minerals lose their antibacterial character after cation exchange—a promising finding that's apparently only part of the picture. "We can identify the elements that are removed by cation exchange," but none are present at concentrations that inhibit bacterial growth, Williams told C&EN.

Williams added that she and her colleagues found that one of the American clays stops killing pathogens after the silicate sheets become dehydroxylated at 550 °C. In contrast, the other clay kills until heated to 900 °C, which breaks down the mineral structure to oxides. "That is telling us that the antibacterial chemicals are bound at different crystallographic sites in the minerals," she said.

Williams and Haydel and their students are funded by a two-year grant from the National Institutes of Health's Center for Complementary & Alternative Medicine, and they prefer not to reveal the precise locations of the clay sources so that people afflicted with related illnesses will not seek out the clays before they are deemed to be safe for use on wounds and infections.

The researchers urged caution with any natural remedy that has not been fully studied. "We want to understand what the good ones are and figure out new medications that can be used safely," Williams said. Although Brunet de Courssou may have demonstrated that some clays can heal wounds, she added, validated treatments are still a long way off.