Gavel Comes Down on EPA Regulations 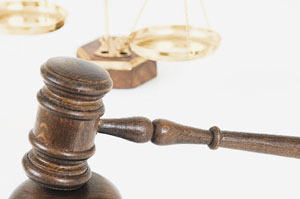 GETTING HAULED INTO COURT to defend an air pollution regulation is a normal course of business for the Environmental Protection Agency. Industry executives direct their lawyers to challenge the EPA air rules that they see as too onerous or too expensive. Environmental activists regularly call into question air quality standards they believe fail to protect people from the harms of pollution. And increasingly, states are filing these suits, too, as well as backing industry or environmental groups in Clean Air Act litigation against EPA.

Over the past decades, EPA has won a number of cases defending its most controversial air regulations. Perhaps most notable was an industry challenge to the agency's 1997 limit on ozone, a major component of smog. That case went all the way to the U.S. Supreme Court, which backed the agency's argument that the Clean Air Act only allows the agency to weigh health issues&and forbids it to consider costs &when setting standards for pollutants such as ozone.

In the past several years, however, the Bush Administration's EPA has amassed what congressional Democrats, state regulators, and environmentalists are calling a significant losing streak. Since 2006, federal courts have overturned several high-profile regulations and an EPA decision under the Clean Air Act.

Losing legal challenges to its regulations has been a regular part of EPA's history, explains Eric V. Schaeffer, executive director of the Environmental Integrity Project, a group that advocates for more effective enforcement of pollution control laws. Schaeffer is a former EPA attorney who resigned as director of the agency's Office of Regulatory Enforcement in 2002 to protest White House political interference with efforts to enforce the Clean Air Act.

"It's not like EPA's never lost in court before," Schaeffer says, adding that in his years as an agency lawyer, "I got my fanny kicked."

But the recent string of EPA's legal defeats is unusual, he says. "It's a pretty significant run—just one after another."

Democrats in Congress, environmental activists, and state regulators see a pattern in these losses. In a half-dozen cases during the past two years, federal courts have rejected the agency's arguments, saying they don't line up with the mandates Congress wrote into the Clean Air Act.

"It seems that we just keep on this same direction of political decisions," instead of heading toward rules that conform to "the protective laws that Congress has passed," says Sen. Barbara Boxer (D-Calif.), who chairs the Senate Environment & Public Works Committee.

State and local air pollution regulators are also unhappy about EPA's string of overturned rules because it makes it harder to set their own regulations. S. William Becker, executive director of the National Association of Clean Air Agencies, calls the EPA's recent losses in court "a steady drumbeat of actions that have interrupted state and local agencies' ability to implement the Clean Air Act."

Those rulings have relied on a legal analysis the U.S. Supreme Court established in 1984. It guides judges on when they should defer to a federal agency's interpretation of any law that empowers that agency to regulate. This includes EPA's authority to control pollution under the Clean Air Act.

Under that analysis, a court must first determine if the meaning of a law, as written by Congress, is clear. If it is, the court must abide by that meaning and reject any alternative interpretation by the agency.

A second step is necessary if the meaning of the statute is ambiguous. Under these circumstances, a court must then accept any reasonable interpretation by the agency.

Many Clean Air Act cases have gotten past the first step of this analysis. That means the legal wrangling focused on whether EPA's interpretation of the law, contained in the regulation under challenge, was reasonable. But the courts have stopped at the first step of the analysis in six recent high-profile cases lost by the agency. They have determined that EPA's actions were counter to clear statutory mandates.

In one 2007 case, the U.S. Supreme Court ruled that carbon dioxide is a pollutant that the agency can regulate, rejecting EPA's industry-backed argument to the contrary (C &EN, April 9, 2007, page 9). The high court upbraided the agency for refusing to comply with "this clear statutory command."

In the other five cases, the U.S. Court of Appeals for the District of Columbia Circuit, which has a reputation as a conservative court, dumped EPA air regulations.

The appeals court cited the language of the Clean Air Act in 2007 as it overturned a regulation exempting incinerators, such as those used at chemical plants to burn waste on-site, from tough emission control requirements. The regulation treated these facilities as though they were less stringently regulated boilers or process heaters.

ALSO IN 2007, the appeals court threw out another rule that created a category of "low risk" facilities that would be exempt from requirements to tightly control emissions of toxic air pollutants. The court found that EPA lacks the authority to create that category because the Clean Air Act mandates specific emission controls for air toxics, without any exception.

Meanwhile, the appeals court voided EPA's emission standards for toxic air pollutants from kilns used to make bricks and ceramics in 2006, saying the regulation was too lenient. It found that EPA violated Clean Air Act requirements for calculating how stringent the standards need to be.

Also in 2006, the court overturned a rule designed to make it easier for industries to upgrade older industrial facilities without installing expensive, modern emission controls. In its opinion, the court pointed out that the Clean Air Act specifically requires the pollution controls for any physical modification that increases emissions.

And in a decision earlier this year, the appeals court threw out EPA's regulation of mercury from power plants because the agency failed to follow a procedure spelled out in the Clean Air Act.

Rep. Henry Waxman (D-Calif.), chairman of the House Oversight & Government Reform Committee, is among those in Congress who are troubled by EPA's legal defeats.

"I am concerned that these cases indicate that your agency is disregarding unambiguous statutory directives when the law requires action that differs from the Administration's policy preferences," Waxman wrote in an April 4 letter to EPA Administrator Stephen L. Johnson.

EPA acknowledges these have been notable losses.

Nonetheless, Martella wrote, the recent high-profile decisions against EPA "are not representative of our overall litigation results" in Clean Air Act cases.

In addition, Martella said in the letter, EPA was on the winning side in a 2007 Supreme Court ruling in a Clean Air Act case. The high court considered a thorny matter over what sort of renovations of older facilities trigger the installation of modern air pollution controls. The nine justices unanimously agreed that pollution controls are needed if the modifications cause overall emissions to rise, even if the plant's hourly rate of emissions remains the same.

The case began during the Clinton Administration. EPA sued Duke Energy after the utility made modifications that extended the number of hours its units could operate but did not boost hourly emission rates. The Bush Administration continued the case but abandoned it after a federal appeals court sided with Duke, saying as long as hourly emissions didn't increase, additional pollution controls weren't needed.

Environmental groups sought review of that decision by the Supreme Court. But after the Court agreed to hear the case, the Bush Administration ended up backing the environmentalists. Winding up on the victorious side in that high court ruling, however, does not erase EPA's legal losing streak.

FOR EXAMPLE, EPA met a court-ordered deadline in 2005 to issue a regulation controlling mercury from power plants, Becker explains. Many states were unhappy with EPA's rule, and some created their own tougher rules designed to cut mercury releases faster and more deeply than the federal regulation (C&EN, April 2, 2007, page 52). But in other states, legislatures passed laws prohibiting their regulators from issuing mercury control rules that were more stringent than EPA's—essentially requiring them to adopt the federal agency's strategy.

Because EPA's mercury rule was overturned earlier this year, states that adopted the agency's emission control plan are in a quandary, Becker says. Their mercury regulations are no longer legal under the Clean Air Act, either. These states waited three years as the EPA rule wound its way through the legal system, and it is likely to take EPA about two more years to issue a new mercury regulation, he says.

This adds up to a five-year delay during which "utilities are spewing a neurotoxin into the air" unabated, Becker says. All of this could have been avoided, he argues, if EPA had originally crafted a rule that conformed to the Clean Air Act.

Schaeffer says if EPA wants to make changes contrary to the language of the Clean Air Act, such as creating a "low risk" category for air toxics, then it needs to ask Congress to change the law to allow that. But regulators are hesitant to ask lawmakers to amend statutes, he points out.

"It's messy and time-consuming and uncertain," Schaeffer says of the legislative process. But it's the only way to move past parts of the Clean Air Act that the agency doesn't agree with or find workable.

The appeals court pointed this out, too, in its decision overturning the standards for brick and cement kilns. But until the law gets changed, the court warned, EPA "must obey the Clean Air Act as written by Congress."