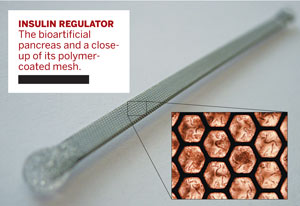 PRICK FINGER. Test blood. Inject insulin. For millions of people around the world, this painful and tedious cycle is all that stands between relative health and the ravages of diabetes, a disease known to cause blindness, kidney failure, and death. Joseph P. Kennedy hopes that a specially coated metal tube, no larger than a cigarette, will someday put an end to all that.

Kennedy, a professor of chemistry and polymer science at the University of Akron, in Ohio, calls the device a bioartificial pancreas. He spoke about its construction during a presentation in the Division of Polymer Chemistry at the American Chemical Society national meeting in New Orleans last month.

The World Health Organization estimates that more than 180 million people worldwide have diabetes, and that number is expected to double by 2030. An artificial pancreas, Kennedy says, "would have immense socioeconomic significance."

A number of research groups around the world are currently working to develop artificial pancreas technologies. Most strategies involve transplanting healthy islets—the pancreatic cells that detect glucose and release insulin—into the diabetic patient. The cells are encapsulated either individually within a hydrogel or as a large collection of cells within some type of polymer membrane.

Kennedy's group takes the latter approach. Their prototype begins with a scaffold made from a 7-cm-long tube of the biocompatible nickel-titanium alloy nitinol that's been perforated with laser-cut hexagonal holes. Polyurethane nanofibers are then electrospun over the tube, through techniques designed by Kennedy's colleague Miko Cakmak, who is a polymer engineering professor at Akron. The resulting entanglement of nanofibers, or so-called nanomats, reinforces the openings in the scaffold's mesh.

THE TUBE is then coated with a semipermeable polymer membrane made up of poly(dimethylacrylamide) and polydimethylsiloxane domains cross-linked by polymethylhydrosiloxane. The entire assembly is dried, washed to remove small molecules, cleaned in an autoclave, and finally filled with a suspension of pig islets.

Ken S. Rosenthal, a professor of microbiology and immunology at Northeastern Ohio Universities College of Medicine, and one of Kennedy's collaborators on the project, says that the polymer membrane is really what sets this artificial pancreas apart. Encapsulating a large collection of islets has been difficult, he says, because the material to make that capsule has never been designed for that purpose.

"This device differs because its polymer membrane has been designed to have the optimal properties for encapsulating islets," Rosenthal tells C&EN. "It allows for free movement of insulin and glucose but restricts access of immune molecules that might attack the encapsulated islets." Likewise, any viruses that might be piggybacking on the islets are trapped behind the membrane.

"Because of that, we can use pig cells, and the only thing that communicates between them and the patient are the small molecules and small proteins," Rosenthal notes.

The polymer can also sequester oxygen from the environment, thanks to its silicone-based components. This oxygen nourishes the encapsulated islets cells. "These membranes are biocompatible, flexible, transparent, autoclavable, and they're easily synthesized and relatively inexpensive," Rosenthal says.

"Kennedy is the only researcher that I know of who designed the bioartificial pancreas for longevity and oxygen permeability," says Len Pinchuk, president and chief executive officer of Miami-based Innovia, a company that develops biomaterials and medical devices. "Most other researchers in this field come from a biological background and don't have the tools to create these new biomaterials."

The artificial pancreas can be inserted anywhere in the body that encounters blood flow, Kennedy says, even just beneath the skin. "The blood brings the oxygen and nutrients needed by the islets and removes metabolic wastes, such as carbon dioxide."

The device, Kennedy notes, acts as both a glucose sensor and an insulin delivery device. "It delivers exactly the needed amount of insulin," he says. "Insulin concentration in the body must be precisely controlled. Too high or too low concentrations result in very serious side effects."

People with type 1 diabetes—around 2 million in the U.S. alone—make up the primary market for the device, although Kennedy thinks it could also be useful for the some 4 million patients with type 2 diabetes who inject insulin to control their blood sugar levels.

"The goal is to correct high glucose levels in real time instead of once a day or twice a day," Rosenthal says. So far, tests with rats and dogs, spearheaded by Kennedy's collaborator Sharon F. Grundfest-Broniatowski, a surgeon at the Cleveland Clinic Foundation, have shown preliminary success. Next, the team hopes to do more advanced animal experiments and then move on to human trials.

"If experimental results in vivo show a satisfying survival rate and perfect functions of the macroencapsulated islets, Kennedy's artificial pancreas will have great potential in clinical applications," according to Lina Lu, a doctor in the department of immunology and surgery at the Cleveland Clinic Foundation.

Materials
Fluorescent materials are the brightest ever made
Biomaterials
Fruit’s metallic blue caused by lipid nanostructures
Ionic Liquids
Chemistry in Pictures: Papa’s got a brand new solvent
Share X
To send an e-mail to multiple recipients, separate e-mail addresses with a comma, semicolon, or both.
Title: Perfecting An Artificial Pancreas
Author: Bethany Halford
Chemical & Engineering News will not share your email address with any other person or company.