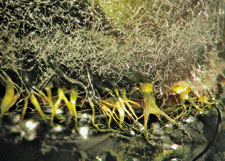 Certain fungi can colonize surfaces of pieces of depleted uranium and transform the metal into stable minerals. The process could help prevent the toxic metal from leaching into groundwater or being taken up by plants, according to Geoffrey M. Gadd of the University of Dundee, in Scotland, and coworkers (Curr. Biol. 2008, 18, R375). Depleted uranium is the material left after 235U is separated to enrich uranium for use in nuclear reactors and nuclear weapons. Prized for its high density, depleted uranium is used in applications such as armor-piercing ammunition. Although depleted uranium is only weakly radioactive, it is still highly toxic. The researchers found that several fungi (one shown) form biofilms on a common uranium-titanium alloy. Such biofilms retain moisture on the alloy's surface, facilitating the formation of uranyl ions. The fungi also produce carboxylic acids that further promote uranium corrosion. The scientists used X-ray techniques to characterize the uranium products: A yellow uranium(VI) species, likely a uranyl hydroxy hydrate mineral such as schoepite, (UO2)4O(OH)6·6H2O, formed a crust around fungal structures, while small amounts of uranyl carboxylate and uranyl phosphate compounds accumulated inside fungal cells.