Chemist prepares to ascend to top job at UNC Chapel Hill, where he plans to focus on faculty recruitment and retention 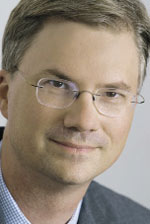 H . HOLDEN THORP has a tough time keeping jobs. But that's not a bad thing. He's very good at getting new ones.

On May 8, the Board of Governors of the University of North Carolina elected Thorp, 43, as the next chancellor of the system's flagship institution, UNC Chapel Hill. Last summer, he became the dean of the College of Arts & Sciences there after a national search. For the preceding two years, he served as chair of its chemistry department. Each new job cut short his tenure in the previous one.

Thorp has had a long history with UNC Chapel Hill. He is a third-generation Tar Heel. His grandfather and both of his parents attended the university; he never considered attending another school. He received his bachelor's degree in chemistry from the university in 1986.

As an undergraduate, he never dreamed of becoming chancellor. "I didn't even know who the chancellor was," he says. (For the record, it was Christopher C. Fordham III.) Instead, he had an even more unusual career aspiration. "I couldn't imagine that that there was a higher position than being chair of the chemistry department. I did imagine when I was an undergraduate that I would like to have that job one day. When I got it, I thought that was my dream job."

Thorp, whose research has focused on biological applications of transition-metal electrochemistry, relished serving as department chair. "I enjoyed helping my colleagues," he says. "I saw myself as someone who could keep things off their backs."

Thorp acknowledges that university researchers must confront uncertainty in the funding environment but that science is where university growth is likely to come. "Investigators who are running research groups are facing a variety of challenges, both in terms of keeping the best people and paying for the research they do," he says. Figuring out how to navigate those challenges "is going to be important not just for the scientists themselves but as the university as a whole looks at its future."

Thorp's priority is ensuring that UNC Chapel Hill recruits and retains faculty members who are both excellent teachers and great researchers. "The people who have the experience and skill to be excellent researchers and who are also excellent teachers are a very small universe of people," he says. "We want to capture as many of those as we can against all the other universities that are competing for them."

As part of that goal, he plans to focus on junior faculty, "helping them succeed and keeping them here when they do," he says. Success consists of "people coming up for tenure and having a dossier that is exciting to their peers at other great institutions," Thorp says. "We provide all the ingredients people need to achieve that."

IN ADDITION, Thorp sees science playing an important role in North Carolina's current and future economy. "Most people would agree that science has played an incredibly important part in the economic trajectory of North Carolina," he says. "The supply of scientists to the North Carolina economy is a very important duty that we share with Duke and NC State and the other schools in the UNC system."

Although he views people as the primary product of any university, he also sees a role for technology transfer, in which he himself has been actively involved. "I've had all different degrees of successes and failures" with companies, he says. He helped start companies such as Viamet Pharmaceuticals and the now-defunct Xanthon. He hopes that his experience with the different aspects of technology transfer "will be able to get some of the fear of the unknown out of the process" for the larger university community.

Thorp sees technology transfer as a way to open a dialogue with industry rather than as a revenue source for the university. "The real motivation is to get our ideas out in the marketplace and to let industry tell us which ones are good and what the new challenges are," he says.

"Like a lot of universities, we're still at the beginning stages of translating our extraordinary capability in basic science into the clinic or the marketplace," Thorp says. The UNC School of Medicine last week received a National Institutes of Health research grant aimed at translating basic medical research into the clinic. "We were already well on our way, but this will accelerate it," he says. "We need something similar in the physical sciences. It's probably going to be up to us to provide that."

Ascending to the top job at such a young age, Thorp aspires to a long tenure as chancellor, similar to that of Derek C. Bok at Harvard University or John T. Casteen III at the University of Virginia. "The fact that I can contemplate what it would be like to do this job for a long time is certainly one of the attractions of taking the job now," Thorp says. "Whether I'm able to do that is something that we'll only be able to answer 10 years from now."