Chemists characterize the far reaches of the periodic table

Heavy Data
[+]Enlarge
Credit: J. Dvorak and A.B. Yakushev/Technical University of Munich
The plates of a detector to be used in chemistry experiments of transactinides at GSI. 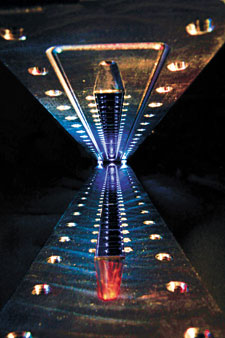 Credit: J. Dvorak and A.B. Yakushev/Technical University of Munich
The plates of a detector to be used in chemistry experiments of transactinides at GSI.

LET'S SAY YOU SUDDENLY have an exotic substance in hand and you want to characterize it. You might start by determining its melting point, getting an infrared spectrum, and maybe follow that up with an elemental analysis.

But what if your samples consists of single atoms, made available to you, say, every two weeks? And one more thing: Those atoms disappear within seconds.

That's the challenge faced by the chemists working on understanding the transactinides, or "superheavy elements." Starting with rutherfordium and going through element 114—at least so far—these researchers probe the last row of the periodic table to see if the trends learned in Chemistry 101 continue to hold up as elements get supersized.

In particular, the large nuclear charge of the superheavy elements means that some of their electrons move with velocities approaching the speed of light, leading to relativistic effects. One of the consequences, at least theoretically, is that the order of the elements' electronic orbitals may change, possibly altering their reactivity as compared with the lighter elements that share their group. In some instances, theorists postulate that the heavier transactinides might resemble noble gases despite a periodic table position that would dictate metallic properties.

And so chemists have taken up the task of evaluating these elements' properties through both physical and chemical means. The scientists must work quickly because the transactinides are radioactive and generally have half-lives of seconds at most. They must also run experiments 24 hours a day, seven days a week, for weeks or months in order to produce enough atoms of the desired element to draw scientifically sound conclusions.

Recent efforts have focused on the characterization of element 112, temporarily named ununbium (Uub). First created in 1996 at the Gesellschaft für Schwerionenforschung (GSI) in Darmstadt, Germany, the 277112 isotope has a half-life of about 200 microseconds, whereas 283112 has a half-life of about four seconds. The periodic table places element 112 in group 12, with a closed-shell electronic ground state configuration of [Rn]5f146d107s2. Theoretical predictions of element 112's properties have been contradictory: They variably say that 112 would behave like a noble transition metal akin to palladium or platinum; that it would have metallic interactions similar to its group 12 neighbor, mercury; or that it would be inert, akin to the noble gas radon.

To test those theories, a group of researchers led by Robert Eichler of the Paul Scherrer Institute (PSI), in Switzerland, evaluated adsorption of element 112 on gold (Nature 2007, 447, 72). Working at an isotope-generating accelerator facility at the Joint Institute for Nuclear Research (JINR) in Dubna, Russia, the researchers aimed a beam of 48Ca at a target made of 242PuO2 to set off fusion reactions that produced a number of different atoms, in particular element 114 (ununquadium, Uuq). 287114 decays to 283112. To provide internal controls and comparisons, impurities placed into the target material also produced mercury and radon isotopes.

The researchers then funneled all of these atoms into a rectangular detector with gold on one side and quartz on the other. Along the detector was a temperature gradient from as high as 35 ºC going down to –180 ºC. In three weeks of beam time, the researchers observed just two atoms of 283112 adsorbed onto the gold. They used the temperature at which the atoms were detected to calculate adsorption enthalpies. The results indicated a stronger interaction between element 112 and gold than expected for a noble-gas-like element. The scientists concluded that the most likely explanation is that element 112 formed bonds to the gold, as would a typical metallic group 12 element.

In additional work on element 112, the same group later observed five more atoms of 283112. The scientists reached the same conclusion—that this element adsorbs onto gold similarly to other group 12 elements (Angew. Chem. Int. Ed. 2008, 47, 3262). They further used a linear correlation between single-atom and bulk properties to estimate the boiling point of element 112 to be 357 K—making the material significantly more volatile than Zn (1180 K), Cd (1040 K), and Hg (630 K), as predicted by group trends and relativistic effects. Eichler and colleagues are now working in Dubna to characterize element 114.

Additional chemical details of the superheavy elements can be elucidated through ion exchange or reverse phase chromatography; the latter has recently been used to characterize element 105, dubnium, which was first identified in 1968 at JINR. The isotope 268Db is exceptional among transactinides in that it has a relatively long half-life of 29 hours, allowing researchers more time to work with the material.

At the American Chemical Society national meeting in New Orleans in April, Lawrence Livermore National Laboratory scientist Dawn Shaughnessy described how she and her colleagues bombarded 243Am with 48Ca and directed the fusion reaction products to a copper block. The researchers then shaved off and dissolved the surface of the block. They ran the resulting material on a reverse-phase chromatography column made from a fluorocarbon-based polymer, polychlorotrifluoroethylene. The liquid phases were a mixture of acids and a ketone.

Compared with other group 5 elements, dubnium eluted similarly to its group 5 neighbor, tantalum. But in previous work using anion-exchange columns, dubnium behaved more like another member of group 5, niobium, and formed fluoride complexes (Radiochim. Acta 2002, 90, 127). The conflicting results mean that there is still much to be learned about dubnium, Shaughnessy says. "Chemistry on these elements has been done for many years, but we still don't know all their chemical properties."

She and colleagues are now working to streamline their chemical separation techniques so that they can characterize elements with shorter half-lives. They are also trying to automate analytic processes so they can run continuously for longer periods and capture elements that are produced only rarely in fusion reactions. "For 114 in particular, the production rates are extremely low," Shaughnessy says. "There are just not enough graduate students to do the chemistry every 10 minutes for five months."

TRANSACTINIDE RESEARCHERS are not limited to looking at atoms alone. In some cases they can react an element with another material. In the case of hassium, first discovered in 1984 at GSI, density functional calculations predicted that Hs would behave similarly to its group 8 neighbor, osmium.

A team of researchers led by Heinz W. Gäggeler of PSI and the University of Bern, in Switzerland, tested those predictions at GSI (Nature 2002, 418, 859). After bombarding a 248Cm2O3 target with 26Mg2485+, they exposed the resulting atoms to O2 and then sent the reaction products, including some oxides, into a detector covered with an adsorbing layer of silicon nitride. Along the detector was a temperature gradient, from –20 ºC to –170 ºC.

Hassium-269 has a half-life of 10 seconds, whereas 270Hs has a half-life of 20 seconds; the researchers detected decay products of seven Hs atoms in about 64 hours of experimental time. The Hs species adsorbed onto the detector surface at temperatures that indicated its adsorption enthalpy was in a range consistent with what the researchers expected for HsO4. This observation suggests that Hs and Os react similarly to O2, as predicted.

Other heavy-element aficionados are exploring the possibility of doing additional gas-phase or liquid chemistry experiments—going beyond HsO4 to form other oxides, chlorides or bromides, or even organometallic compounds. Critical to these experiments is the use of so-called recoil separators to filter out at least some undesired elements produced by the fusion reactions. "Behind the separator we can do much cleaner chemistry," notes Andreas Türler of the Technical University of Munich, in Germany.

But at the same time such separators can also hurt yields of the element of choice. Matthias Schädel of GSI hopes that a new separator there, the TransActinide Separator & Chemical Apparatus (TASCA) will address some of these issues, enabling new experiments. "Organometallic chemistry behind a recoil separator could open up a completely new field," Schädel says. And in turn we could find out whether the age-old periodic trends continue to hold for the superheavy elements.

Periodic Table
Exploring the superheavy elements at the end of the periodic table
Physical Chemistry
Seaborgium Carbonyl Complex Created
Physical Chemistry
Element 117 Repeat
Share X
To send an e-mail to multiple recipients, separate e-mail addresses with a comma, semicolon, or both.
Title: Extreme Elements
Author: Jyllian Kemsley
Chemical & Engineering News will not share your email address with any other person or company.