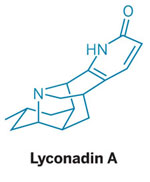 A handful of alkaloids derived from Lycopodium club mosses possess promising biological activity, including neurotrophic and anticancer properties. But because they are only available in minuscule quantities, the vast majority of these compounds have yet to undergo comprehensive biological evaluation. In an effort to glean more information about the “miscellaneous group” of Lycopodium natural products—so named because their frameworks are distinct from the other structural classes of these compounds—chemists at the University of California, Berkeley, have developed a strategy for creating the molecules’ polycyclic core from a common precursor (J. Am. Chem. Soc. 2008, 130, 7222). The approach relies on a proximity-driven oxidative C–N bond-forming reaction that laces up the alkaloids’ polycyclic skeleton. As a proof-of-concept experiment, Richmond Sarpong, Alakesh Bisai, and Scott P. West used the strategy to prepare the miscellaneous Lycopodium alkaloid lyconadin A. The key cyclization step produced the molecule’s caged pentacyclic core in 80% yield via a one-pot protocol. The route potentially provides access to similarly structured alkaloids and their derivatives, according to the authors.