Medicilon Strives To Keep The Pace 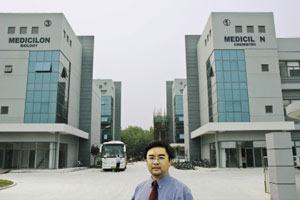 FIVE YEARS AGO, China was perceived by Western drug discovery researchers either as a supplier of competitively priced chemistry services or as a good place to conduct clinical trials on patients. Researchers did not go there to purchase biology services or get toxicology studies done.

The idea of the three founders of Medicilon was to start offering these additional services and see what happened. Jintao Zhang, Chunlin Chen, and Cheney Mao launched their company in 2004, and it took off like a rocket.

At its start, the firm employed just 20 people operating in 10,000 sq ft of lab space. By the end of 2008, it will have a staff of about 470 people and occupy 218,000 sq ft. In addition to its original facilities in Shanghai's Zhangjiang Hi-Tech Park, Medicilon now operates a research campus close to the city's international airport that consists of four multistory buildings. The company now is one of only a handful of research service providers in China able to work with primates.

Medicilon's success has taken the founders by surprise. "We thought we'd just employ 50 people for the first two years, not 100 by the end of year two like we did," recalls Zhang, a cofounder who heads the company's chemistry operations. "And we never envisaged that by now we'd have these four buildings." Two of the buildings are part of a joint venture Medicilon formed in December with the Michigan-based preclinical studies provider MPI Research.

Customers can work with Medicilon either on a project basis or by hiring the company's staff as "full-time equivalents," or FTEs, a phrase used in the contract research industry to describe scientists whose services are essentially rented to clients for a period of time.

Sirtris initially tried three service providers in China, one of which was Medicilon. "We wanted to see which was the most cost-efficient, timely, and easy to work with," Elliott says. "So far, Medicilon has been able to make molecules for us, scale them up, do some pharmacokinetics studies, a lot of biology, make proteins and enzymes, and do crystallography," he says. GlaxoSmithKline recently announced it would acquire Sirtris for $720 million (C&EN, April 28, page 25).

Born in China, the three founders of Medicilon lived for many years in the U.S. and still spend much time there. Zhang went to the U.S. as a postdoc at the University of Chicago and was later a research associate at Chicago's Ben May Institute for Cancer Research. He then worked for eight years at Medichem, eventually becoming head of combinatorial chemistry. Medichem is now part of the Icelandic firm deCode.

MEDICILON'S CHAIRMAN and chief executive officer of the venture with MPI, Chen earned a Ph.D. in pharmacology and toxicology at Oklahoma State University in 1991. He then joined the Parker Hughes Institute in St. Paul, Minn., where he conducted leukemia research for five years. After that, he became a team leader for preclinical drug evaluations at Boston-based Vertex Pharmaceuticals.

Chen says the idea to form Medicilon came to him while at Vertex because the firm outsourced a lot of work. He proposed his concept to Mao, a former colleague at Parker Hughes with whom he had coauthored about 30 scientific papers. Mao suggested that Zhang manage the company's chemistry services. Mao had known Zhang since the mid-1980s, when he was a research associate at the Shanghai Institute of Organic Chemistry and Zhang was a graduate student there.

Several experienced scientists have since joined Medicilon. Peter H. Rehse, a Canadian, joined late last year from Japan's largest scientific agency, Riken, and now heads Medicilon's structural biology activities. The Taiwanese-American Stan Lin came on board earlier this year as vice president of chemistry after 18 years at Abbott Laboratories in the U.S., where he had been a senior group leader in oncology research.

Other contract research organizations in China are now expanding to offer biology and preclinical services of their own, but Medicilon has led the way. Although it has yet to ramp up operations at its four buildings, Zhang says, Medicilon is considering expanding into new facilities that it has already secured in Shanghai.