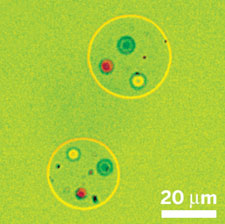 An electrospray method developed by Yong Zhao, Lei Jiang, and coworkers at the Chinese Academy of Sciences in Beijing can trap and keep separate multiple components in a single cell-like capsule in one step (J. Am. Chem. Soc., DOI: 10.1021/ja801803x). This technique could lead to applications in drug delivery, materials science, and food science. The researchers first embedded multiple capillaries into a needle to form a compound nozzle. They then fed a viscous inorganic “shell” fluid through the needle and up to four different organic “core” fluids through the capillaries. The shell and core fluids formed a compound fluid as they met at the nozzle’s outlet. Under an applied voltage to the nozzle, the compound fluid stretched and fragmented into a spray of charged droplets that formed into larger capsules. Droplets of each of the core fluids ended up with a “jacket” of shell fluid, which kept them separate from the other components in each capsule. In one test, the researchers used their one-step apparatus to separately encapsulate three different glycerol-based fluid droplets in a photopolymer shell. Previous methods to enclose multiple components in this manner required numerous steps and couldn’t always keep the components separate, the researchers note.