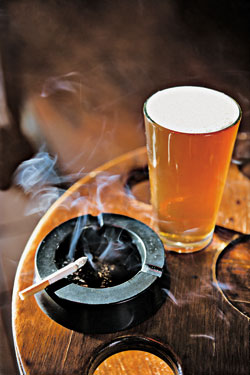 Rules imposed by public authorities because they are for our own good should always be looked at with skepticism. But when smoking was banned in restaurants and bars in numerous jurisdictions for health reasons, it seemed like a move generally for the better. Now there's a wrinkle.

A recent study published in the Journal of Public Economics finds that counties imposing SMOKING BANS in bars are showing increases in drunk-driving and fatal accidents involving alcohol.

The researchers, Scott Adams at the University of Wisconsin, Milwaukee, and Chad Cotti now at the University of South Carolina, analyzed data from every U.S. county from 2000 to 2005, comparing the 120 counties that had smoking bans with the nearly 2,000 that did not. The economists found that the relative increase in accident risks was 13% for those counties that had smoking bans.

The reason appears to be that smokers in smoking-restricted counties were willing to drive far out of their way to find a drinking establishment where they could smoke. Accident rates were especially high where county-to-county border-hopping was possible to get to smoky bars.

It may be that the positive effects of banning smoking in bars and restaurants outweigh these negative consequences, but things are not necessarily cut-and-dried. The old law of unintended consequences is certainly in effect here, and it should serve as a warning to well-intentioned lawmakers.

A press release from Boeing recently announced the firing of a high-energy CHEMICAL LASER from aboard a military aircraft for the first time. Because this is a major national defense research project, Boeing didn't reveal many details. Named the Advanced Tactical Laser (ATL), the weapon will be used to "destroy, damage, or disable targets" from the air with, hopefully, little collateral damage.

This announcement was arresting because it caused an immediate flashback to a ridiculous movie that still shows up on cable TV channels from time to time. Titled "Real Genius," the 1985 film stars Val Kilmer as an extremely annoying but brilliant physics grad student at a research university, working with several other students for an overbearing, unscrupulous professor. Their task is to build a high-energy chemical laser that can be fired from a military aircraft. 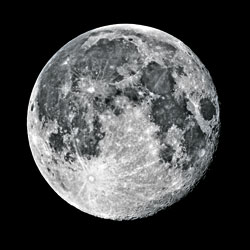 The twist in the film is that the students are not told that the laser is for the military. When they figure this out, they become angry and sabotage the test-firing of the device so that it destroys the professor's house.

The similarity in concept between the fictional movie laser and the real laser described by Boeing is striking. It makes one wonder if weapons designers at the Department of Defense find their inspiration by watching tacky sci-fi movies on cable.

Lasers aren't involved, apparently, but NASA has reported that bright flashes observed on the surface of the moon are real.

Noting that not so long ago anyone who reported seeing flashes of light on the moon would have been labeled as a little loony by astronomers, NASA now says it has logged more than 100 such flashes on the orb's surface in the past two-and-a-half years. And the agency's moonstruck researchers also say they know what causes the flashes: explosions due to METEOROIDS hitting the moon. The meteoroids apparently create impacts equivalent to many hundreds of pounds of TNT.

The impacts come from a vast swarm of natural space junk littering the inner solar system. Stray comet dust and chips of old asteroids are among the objects hitting the moon. Traveling at speeds of 30,000 mph or faster, no combustion is needed for the impacts to be visible. The kinetic energy of the object slamming into the moon at that speed heats up the rocks and soil on the lunar surface enough to glow like molten lava, NASA explains.

This week's column was written by David Hanson. Please send comments and suggestions to newscripts@acs.org.