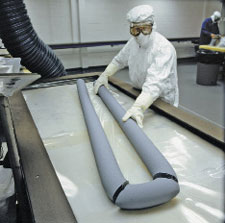 Makers of solar photovoltaics can breathe easier now that leading polysilicon manufacturer Hemlock Semiconductor has more than doubled production at its facility in Hemlock, Mich. Other manufacturers are also increasing capacity this year, which will help to alleviate the pain that shortages have caused the industry.

"Delivering polysilicon from our new facility as quickly as possible was essential to meet our customers' expectations," Chief Operating Officer Rick Doornbos says. Hemlock will increase production by 9,900 tons, bringing the company's total annual capacity to almost 21,000 tons by the end of 2008.

High-purity polysilicon, which differs from the silicon in computer chips in that it consists of multiple crystals rather than a single monolithic crystal, is a major component of semiconductor devices and solar photovoltaics. Silicon is responsible for about 20% of the current cost of solar cells, according to Richard M. Winegarner, president of solar consultancy Sage Concepts.

Hemlock is a joint venture of Dow Corning, Shin-Etsu Handotai, and Mitsubishi Materials. The company plans to continue expanding capacity at the site to more than 39,000 tons by the end of 2011. The plant was built by Dow Corning in 1960, and it expanded production 10 different times by 2006.

These days, solar energy is an important part of the market for silicon. "For 30 years, the photovoltaic industry primarily relied on scrap silicon from the semiconductor supply chain," Winegarner says. But demand from both industries began to outstrip supply in 2004, with solar growing faster by 2006.

The rise of the solar energy industry has improved profitability for silicon makers, according to Winegarner. Hemlock reports that most of the additional capacity is already contracted out to its customers, who are now evenly split between solar and semiconductor manufacturers.

Winegarner forecasts that total capacity will grow to more than 200,000 tons in 2011, up from 45,000 in 2006, and that supply will more than meet demand. It may take two to three years, but analysts predict that contract prices will decrease to $50 per kilogram from an average of $80. "Vendors need to look at the long-term perspective with the assumption that prices will soften from their currently high levels," Sundar says.

Shifts in technology are likely to affect silicon demand, according to Sundar. For example, the market could grow for thin-film solar modules, which are not made with polysilicon. Traditional solar cell maker Kyocera has reduced the silicon content of its panels to minimize its consumption of the expensive raw material.

Changes in government subsidies given to consumers will also have an impact. In Germany, where more than half the world's photovoltaic energy is produced, the coalition government has tentatively agreed to cut subsidies by 16% in the next two years.

Business
More Polysilicon For Solar Cells
Business
GE And Evergreen Close Solar Plants
Business
Solar On Sale
Share X
To send an e-mail to multiple recipients, separate e-mail addresses with a comma, semicolon, or both.
Title: Silicon Makers Ramp Up
Author: Melody Voith
Chemical & Engineering News will not share your email address with any other person or company.