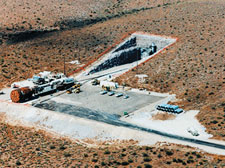 On June 3, the Department of Energy submitted to the Nuclear Regulatory Commission an 8,600-page application to build the world’s first geological repository for high-level nuclear waste and spent nuclear fuel at Yucca Mountain, in Nevada. NRC will spend the next three months assessing the application’s completeness, and it will need four years to fully examine the construction application, the agency said in a statement. DOE also provided to NRC 3.6 million documents and more than 30 million pages of material, which is on the NRC website. The repository is expected to cost $80 billion, and it could open in 2020 at the earliest, according to DOE. However, missing from consideration is a key standard needed by NRC to review the construction license application: a radiation exposure standard to protect future generations. A standard developed by EPA was thrown out by a federal court. Although EPA proposed a modified radiation exposure standard in 2005, the agency has yet to finalize it. Nevada residents and officials strongly oppose the site, and the state has told NRC it will file some 500 technical objections to the application. Senate Majority Leader Harry Reid (D-Nev.) signaled his continued opposition, calling the application “shoddy at best” and the design “only 35% complete.”