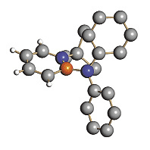 WITH A SYSTEMATIC SERIES of X-ray crystal structures, chemist Shih-Yuan Liu and coworkers at the University of Oregon, Eugene, provide evidence that a family of six-membered rings featuring a boron-nitrogen bond has a benzenelike nature (J. Am. Chem. Soc. 2008, 130, 7250). The compounds, 1,2-dihydro-1,2-azaborines, feature bonding characteristics and other properties that could make them valuable substitutes for benzenes in biomedical and materials research.

Benzene is the quintessential aromatic compound, stabilized by virtue of delocalized electrons freely moving about its circular array of atoms. Liu's work indicates that 1,2-dihydro-1,2-azaborines, related to benzene through substitution of one of the ring's bonds with a B–N bond, share that special stability.

Liu and coworkers synthesized a derivative of 1,2-dihydro-1,2-azaborine with substituents at the boron and nitrogen atoms. They also made four reference heterocycles designed to be nonaromatic. They then obtained X-ray crystal structures of all five compounds. Compared to the reference compounds, the purported benzene surrogate showed clear signs of the electron delocalization that is emblematic of aromatic compounds, such as a more planar six-membered ring with more homogeneous bond lengths.

"This is a thorough and beautifully simple study," adds Warren E. Piers of the University of Calgary, in Alberta, who has utilized the B N bond's increased ionic character relative to an all-carbon bond to make polycyclic materials.

The results, Liu cautions, are just one piece of evidence for aromaticity and should be taken together with studies conducted by other teams.

Nonetheless, the findings enrich scientists' understanding of aromaticity, a key concept of organic chemistry, says Todd B. Marder of Durham University, in England, who studies boron compounds. "This is the kind of fundamental chemistry that will no doubt find its way into textbooks," he says.