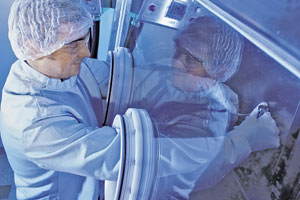 LIKE ANY GOOD PAIRING, an antibody-drug conjugate (ADC) is intended to be greater than the sum of its parts. Drug developers hope the yin and yang of linked biological and small-molecule parts will make for a highly effective therapy.

In creating anticancer conjugates, drug innovators play with the pros and cons of both cytotoxic drugs and targeted delivery molecules. A cytotoxic drug will kill everything in its path—cancer cells and innocent bystanders alike. Monoclonal antibodies, on the other hand, are extremely discriminating for their targets but sometimes therapeutically ineffective on their own.

Through an ADC coupling, the antibody harnesses the potent cytotoxic agent and delivers it by binding selectively to receptors on the target cell. Once bound there, the drug is released from the conjugate to do its work only where it is needed.

Through this drug delivery route, nasty systemic side effects associated with chemotherapy can be avoided. Drugs once considered entirely too toxic for use are in the running, and old drugs can find new life in ADCs. Meanwhile, antibodies can find wider use as cancer-cell-specific messengers.

But matchmaking the right antibody and drug pair, and finding the linker to wed them, is a complicated development challenge. Just how challenging is evident in the large and rapidly growing oncology marketplace.

Although scientists have worked on ADCs for decades, only one has been approved, and that was in 2000. Wyeth's Mylotarg combines the cytotoxic agent calicheamicin with an antibody that binds to leukemia cells. But toxicity and dosage issues stemming from an unstable linker have limited use of the drug.

For now, "conjugates are a niche that has been explored a lot, but there is no certainty that this technology will work," says Enrico T. Polastro, vice president and senior industry specialist with Arthur D. Little Benelux. Others, however, see Mylotarg as proof of the concept, and several drug companies are working on improving conjugation technologies (C&EN, Sept. 25, 2006, page 51).

INDEED, many candidates are in development. Some use new compounds that are at least 100 to 1,000 times more cytotoxic than traditional anticancer agents. Specialized handling skills and containment facilities, along with safety and quality controls, are required to synthesize these highly potent compounds and conduct the conjugation step that readies them for action.

Alert to this opportunity, a few custom chemical manufacturers that can handle highly potent compounds have been expanding their conjugation capabilities. Compared with standard active pharmaceutical ingredient (API) manufacturing, these services promise many times the profit potential, although they also require expensive equipment and lots of time and labor. For now, higher premiums are justified by rising demand and a limited number of suppliers.

Within the conjugation area, not all custom chemical suppliers offer the same capabilities. While they all have the contained equipment needed for making highly potent APIs and carrying out the conjugation, they don't all provide linker technology or the biological component. Often the customer will supply a specially designed antibody and possibly the linker or small-molecule drug.

Due to their confidentiality agreements with drug developers, custom manufacturers don't offer details on what they are making. "Some conjugates are moving pretty far into the clinic and are generating positive results," says David Feldker, SAFC Pharma's vice president for manufacturing and U.S. operations. "The number of customers that we have knocking at the door just for this service is definitely a sign that people are focused in this area." 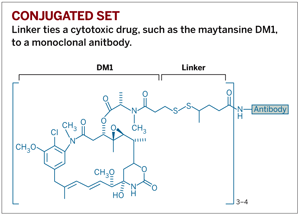 SAFC Pharma, the custom drug-manufacturing arm of Sigma-Aldrich, just started up a 600-sq-ft high-potency API conjugation suite in St. Louis that meets standards for current Good Manufacturing Practices (cGMP). "We have product being manufactured in there right now," Feldker says. "Hopefully, business demand will dictate that we keep adding on there as well."

Because ADCs are targeted, potent, and used at low dosages, commercial quantities may be only kilograms per year and therefore don't call for large production facilities. SAFC, for example, can produce early-stage clinical amounts, or about 200–250 g of material per batch, in its new facility and has the potential to expand to commercial-scale multikilogram batches.

Along with cytotoxics production, SAFC can make the linkers, Feldker says. Biologic compounds have their own set of handling and quality-control measures and regulatory standards, he points out, which SAFC has incorporated at some of its sites. SAFC doesn't manufacture antibodies, "but we are looking at bringing on that kind of capability," Feldker adds.

A customer may have millions of dollars invested in the antibody side of the equation. "That's typically the intellectual property a biopharmaceutical or pharmaceutical company will bring to the table." Feldker says. "They need to send it to someone who is going to do the conjugation to the potent compound, and it really comes down to having the capability to handle the biologics and meet expectations."

Piramal Healthcare recently finished building a cGMP conjugation suite in Grangemouth, Scotland, that can be used to produce ADC batches of a few 100 g and up to 50 kg per year. It joins five other suites for manufacturing highly potent APIs, some of which are outfitted for conjugation as well.

"We are excited about the initial response we have had and the current projects at hand and believe that there might be a need for further expansion in 2008," Ananthanarayanan says. Interest is coming from large pharmaceutical companies as well as small and midsized biotechnology companies, he and others point out.

LINKERS HAVE TO ensure product stability during handling and storage, as well as when the conjugate is circulating in the blood, but then must release the cytotoxic payload once inside a tumor cell. Early linkers were pH dependent, but better ones now use enzyme-labile constructs such as thioethers, disulfide bonds, or peptides.

In addition to linker technology, Lonza is well positioned with its biopharmaceutical capabilities. "We have the ability to produce monoclonal antibodies and the cytotoxic drugs," Bertholjotti explains. "We definitely see a positive view from customers that we are backward integrated in all elements."

Besides monoclonal antibodies, other biological structures such as peptides and polymers can be used to make conjugates and improve drug delivery. Cambrex, for example, manufactures conjugates for customers using polymers and peptides, says Eric P. Neuffer, vice president for sales and business development. And Swiss custom manufacturer Sochinaz collaborates with its parent, the peptide maker Bachem, to make cytotoxic peptide conjugates.

Similarly, Almac Sciences combines its abilities in peptide and potent-molecule synthesis to make conjugates. "We have a number of technologies that allow us to conjugate active species to synthetic peptides, either using protected peptide chains or directly using unprotected linear or folded synthetic peptides," says David Moody, Almac's vice president for commercial operations. "More recently, we have developed technology for conjugating small molecules and synthetic peptides to recombinant proteins."

Meanwhile, Carbogen-Amcis is working on several projects in the conjugation area, says Chief Executive Officer Mark Griffiths. Although the firm doesn't make antibodies, it can handle them. "And we develop the linking technology with the customer and scale it up because there can be a lot of problems taking a linker from the lab to commercial scale," he adds. The typical ADC combines about four drug molecules with one antibody.

Although new cytotoxic drugs are being developed, drugmakers see an opportunity to extend the patent life on some of the older products by making new conjugates, Griffiths explains. "Working with a known drug already on the market may make things move a little quicker in the regulatory approval arena."

These are some of the short-term dynamics in the industry. "Many of our customers are not willing to make the capital investment necessary to build facilities for these products," Griffiths adds. "So we see a big opportunity there for the custom manufacturing market."

Drug Discovery
A small molecule in the gut could explain bariatric surgery’s anti-diabetic effects
Vaccines
What will it take to make an effective vaccine for COVID-19?
Pharmaceuticals
Drug ingredients considered inert might have biological activity
Share X
To send an e-mail to multiple recipients, separate e-mail addresses with a comma, semicolon, or both.
Title: Filling A Highly Potent Niche
Author: Ann M. Thayer
Chemical & Engineering News will not share your email address with any other person or company.