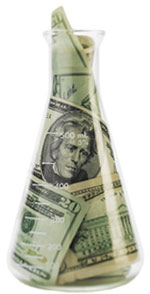 Credit: Shutterstock
With funds already stretched to a breaking point, just finding enough money for small increases for any agency is nearly impossible.

IT'S NO SECRET that the federal budget is facing tough times. Both Congress and the President are trying to stretch the available, but limited, discretionary funds within the budget to cover as many programs as possible. Unfortunately, such tactics create nothing more than a shell game in which there are no real winners.

Take science funding, for example. Last year, Congress passed the America Competes Act, which, among other things, authorized a 10-year budget doubling for the National Science Foundation, the National Institute of Standards & Technology, and the Department of Energy's Office of Science. The bill was the product of the American Competiveness Initiative (ACI), which was introduced by the Bush Administration in early 2006. Although it was hailed as a victory for the physical sciences, ACI failed to translate into actual money for the targeted agencies.

In fact, Congress actually portioned out only modest increases for the agencies targeted by ACI, increases that did not even keep pace with inflation. Compounding these small increases was the fact that they were part of an omnibus budget package that was finalized only in the closing days of 2007. This late action forced nearly every federal agency—not just science-related ones—to operate at their 2007 funding levels for a quarter of the 2008 fiscal year.

Even with such small gains, the physical sciences may in some ways be in better shape than biomedical research. Having already gone through a five-year budget doubling that ended in 2003, the National Institutes of Health has seen budget increases that have not kept pace with inflation for the past five years, and NIH is unlikely to see a change in that pattern anytime soon.

The reason for NIH's hard times has nothing to do with the importance of the agency's work but rather everything to do with the congressional budgetary shell game. In this case, biomedical research funding is being held flat so that new funds—small as they may be—can be added to the physical sciences. Some experts contend, however, that more funding for the physical sciences is not all bad for NIH.

Marburger points out that the doubling of NIH's budget created an unsustainable pattern for the agency and one that he doesn't want to see repeated within the physical sciences agencies.

"Everyone needs to understand that growing any one part of the discretionary budget faster than the overall growth of the whole creates pressures to slow spending while other parts catch up," Marburger says.

One unintended consequence of doubling NIH's budget so fast "was the creation of a swelling demand based on an expectation of continued rapid growth," he explains, adding that "based on historical trends in the discretionary budget, such growth is simply not sustainable."

Ideally, directing more funds to the physical sciences, which have been underfunded for many years, could be done in tandem with providing budget increases for NIH that at least cover inflation. But, again, with funds already stretched to a breaking point, just finding enough money for small increases for any agency is nearly impossible.

TO HELP EASE the situation, the Senate added nearly $1 billion for science research and development to its version of the supplemental war spending bill (C&EN, June 2, page 16). This money would be split among NSF, DOE, NIH, and the National Aeronautics & Space Administration. The money, however, is unlikely to end up being appropriated, as the President has promised to veto any war spending bill that includes domestic spending.

For its part, the Administration contends that it is not against domestic spending. It would, however, like Congress to focus some of its time on clearing all of the budget appropriation bills prior to the start of the fiscal year rather than putting so much effort into back-adding funds for 2008 into unrelated bills. For example, Congress has put debate on the majority of appropriation bills on hold and has basically conceded that the budget will not be passed this year. The hope, of course, is that the bills will get a better shake under a new president.

For Marburger, however, Congress' lack of action on appropriation bills that provide funding for key science areas is nothing new. "The failure of Congress to provide the President's funding increases for three years running despite overwhelming evidence for its urgency is incomprehensible," he says.

In the end, it's unfortunate that science funding, like so many things, has gotten caught up in politics. Perhaps under a new administration, Congress will be motivated to move more quickly to complete appropriations on time and find ways to avoid holding funds for some areas to artificially create increases for others.