Report focuses on grants for early-career faculty and transformative research 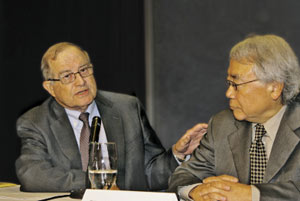 LEADERS IN U.S. SCIENCE and technology policy continue to be concerned about the health of U.S. research, technology, and innovation. Declining federal support for basic research, lagging science and math education in schools, and accelerating foreign competition are among the topics of numerous studies over the past few years on what is needed to improve U.S. competitiveness.

A slightly different tack is taken in a new report released on June 3 from the American Academy of Arts & Sciences that focuses on just two critical areas for improvement. Titled "ARISE: Advancing Research in Science & Engineering," it targets policies that are needed to increase support for early-career investigators at universities and to encourage performance of high-risk, high-reward research.

"The system whereby the federal government and universities work together has worked well, but there is now a need to enhance and optimize that relationship in a changing world," Thomas R. Cech, chair of the committee that wrote the report and president of Howard Hughes Medical Institute, said at the briefing for the report's release. He also emphasized that this report is not about seeking additional funds. "This report is silent on the topic of money and instead examines the questions of what corrections are needed, independent of funding levels, to restore vitality to these areas."

One reason people are concerned is the evidence that early-career researchers are getting older and older before they receive their first government grants. The report reviews the data from the National Institutes of Health and the National Science Foundation on how long it takes new investigators to get their first grants. For NIH, which has the best data on this issue, the average age has risen from 37.2 years old in 1980 to 42.4 years old in 2006. NSF reports that new investigators now have to wait an average of 9.3 years from the time they earn their Ph.D.s to get their first grant awards, compared with 8.5 years in 1990. All indications are that these waits are continuing to grow longer.

"After a large investment by the education system, these early-career scientists find themselves on the verge of launching their careers, only to find difficulty in getting grants," said Keith Yamamoto, an ARISE committee member. Yamamoto, executive vice dean of the School of Medicine at the University of California, San Francisco, said this difficulty has a corrosive effect on the scientists' ability to go forward and impacts their teaching, their credibility, and their willingness to think boldly about new research.

"Grad students and postdocs in the lab watching newly minted faculty going through this difficult process become discouraged in their own futures" and may leave science or engineering for other fields, Yamamoto added.

Trying to get grants for research that is considered high risk can be especially discouraging. The ARISE committee strongly holds that to remain competitive as a nation, it is critical that the U.S. pursue "creative insights that have the potential to transform our knowledge," according to the report.

"There is a basic human quality to become more conservative as resources become more constrained," Cech said. Therefore, as support for federal basic research funding has eroded, so has support for the most creative research. The attitude, "Don't put it in your grant unless you know it will work," all too often guides both early-career and established researchers, according to the report.

Yamamoto underscored the problem by sharing a discussion he had with one young researcher who is convinced that "any transformative research idea going to either NSF or NIH would be dead on arrival."

Although increased federal funding for science and engineering would certainly be a help to new faculty and for those performing high-risk research, and improvement in these areas should be a priority, the ARISE study makes the point that significant progress can be made by revising current policies. For example, among the report's recommendations for universities is improved mentoring of early-career faculty by senior investigators. These early-career faculty should also benefit from improved promotion and tenure policies that consider factors such as work on collaborative projects or credit for well-conceived projects even if they have negative results.

Committee Chairman Cech is serious about seeing action on the ARISE report.

The government funding agencies can also do more to help young researchers, according to the report. Each agency should have a program dedicated solely to funding early-career faculty that makes it simpler to apply for and receive awards. Items such as not requiring a lot of preliminary data for first awards and giving investigators more flexibility in spending the research funds would help, the report recommends.

Neal Lane, a professor at Rice University and past director of NSF and science adviser to President Bill Clinton, told the briefing attendees that improved program management within the agencies can make a difference. "Program officers need to go out into their communities more, be a part of the larger community they serve," said Lane, a member of the ARISE committee.

One of the more controversial recommendations in the ARISE report is that universities should accept greater responsibility for the salaries of research faculty members. The committee said that although charging a portion of faculty salaries to research grants is necessary and appropriate, it concludes that the extreme model of expecting research faculty to raise all of the funds for their own salaries, their students' stipends and tuitions, and their research space, puts a disproportionate burden on early-career faculty and greatly discourages risk-taking.

"UNIVERSITIES we talked with called this idea naïve and impractical," Cech said. Many institutions, especially medical schools, require that researchers charge up to 100% of their salary to grants. "What we want is some rebalancing. Not an immediate rollback, but a change over five to 10 years to more institutional support," Cech said.

The change in approach should also apply to construction of laboratory buildings. Cech said when institutions raise funds for buildings, they also need to raise money to support the research programs that will be performed in them.

Although none of these ideas is especially new, and the report does note that some agencies have small programs that attempt to help new faculty or fund high-risk research, the committee believes much more needs to be done. "Our hope is to raise consciousness of these issues, to start a conversation," Yamamoto said.

"We hope that the report can broaden the dialogue on these problems both inside the federal agencies and outside of them as well," Lane added. "Scientists can see that these are things that need to be done."

Without some follow-up activity, reports such as ARISE can be quickly laid aside for more immediate priorities. "The release of the report today is just the start," Cech said. "We went up to Capitol Hill at the beginning of the process, and we will return to talk with science staffers and others to keep them apprised of our progress."

The full report can be downloaded at www.amacad.org/ARISE.