Discovery of aminoacetonitrile highlights the rigors of space molecule detection

Molecule Factory
[+]Enlarge
Credit: National Radio Astronomy Observatory/Associated Universities
The molecular cloud Sagittarius B2, the north core of which is shown here, is the richest source of interstellar molecules in the galaxy. 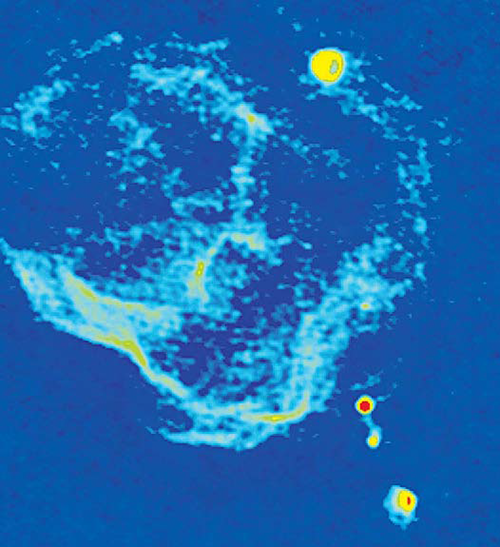 Credit: National Radio Astronomy Observatory/Associated Universities
The molecular cloud Sagittarius B2, the north core of which is shown here, is the richest source of interstellar molecules in the galaxy.

ASTRONOMERS USED TO call it "butterfly collecting." Decades ago, they'd train their radio telescopes on a molecular cloud and without too much effort find the strong, simple rotational spectral signatures of chemical species like CH, CN, or OH.

But astronomers in this climate now say they've detected interstellar aminoacetonitrile, a molecular precursor to the prized target glycine.

Because glycine is the simplest amino acid, its identification in space would imply that the conditions for prebiotic chemistry are widespread throughout the universe. But interstellar glycine remains undetected, and astronomers are getting frustrated with the molecule's apparent absence.

"I looked for glycine for over 25 years and never found it," says Jan M. Hollis, an astronomer with the National Aeronautics & Space Administration's Goddard Space Flight Center in Greenbelt, Md. Hollis has the discoveries of numerous interstellar molecules under his belt, but searching for them, he says, "is not for the fainthearted."

Maria R. Cunningham, an astronomer at the University of New South Wales, in Sydney, Australia, agrees. "It has become very difficult to detect new molecules in the interstellar medium because the 'easy' ones have now been identified," she says.

So a recent report (Astron. & Astrophys. 2008, 482, 179) identifying aminoacetonitrile in the dense molecular cloud Sagittarius B2—the richest source of interstellar molecules in the galaxy—is provocative, astrochemists say. This is partially because of the molecule's relationship to glycine but also because identification was made using the astronomical community's unofficial but rigorous new standards for what constitutes an identification.

Aminoacetonitrile differs from glycine only in that it contains a CN group instead of a COOH group. Recent theoretical work suggests that aminoacetonitrile can be formed on the surface of the icy grains that permeate molecular clouds (J. Phys. Chem. C 2008, 112, 2972). The detection "is a significant event," says James T. Hynes, one of that study's coauthors and a professor of theoretical chemistry at the University of Colorado, Boulder.

The new aminoacetonitrile identification paper was authored by astronomer Arnaud Belloche and astrophysics professor Karl M. Menten at the Max Planck Institute for Radio Astronomy in Bonn, Germany, and their colleagues.

The need for new identification standards was, in part, spurred by interstellar glycine's notorious history. The first announcement of a possible identification of glycine came in 1994, but this was later retracted. Another announcement from a team led by astronomer Yi-Jehng Kuan at National Taiwan Normal University in 2003 was followed by several rebuttal papers (C&EN, Feb. 14, 2005, page 44). The Kuan group's work, a number of astronomers say, was flawed. For example, the researchers composed a spectroscopic fingerprint using lines from different sources. In work described in the rebuttal papers, astronomers used interferometer telescopes—arrays of individual telescopes that, in addition to obtaining the spectra, map the location of the source, giving spatial information about the source of lines.

Glycine isn't the only controversial space molecule. Another recent announcement of the first interstellar ketose, 1,3-dihydroxyacetone, was also quickly rebutted.

But the more complex the molecule, the more rotational (and vibrational) transitions it will have, many of those overlapping with those of numerous other large molecules. This can make it impossible to separate one molecule's spectrum from a forest of lines. And the more transitions a molecule has, the weaker the signal will be, making it hard to detect. For example, glycine has more than 1,000 transitions within a small region of the radio wave spectrum.

Astronomers say they've found aminoacetonitrile (nitrogen is blue, carbon is green, and hydrogen is gray), a precursor to the simplest amino acid, glycine, in interstellar space.

Belloche and Menten say they were able to detect aminoacetonitrile because it's present in quantities large enough to produce a strong enough signal. But given the chemistry that's believed to be involved in interstellar glycine production, glycine actually may be present in amounts too small to be detected with today's methods.

"We're getting to the point where it is more of a statistical game," comments Susanna L. Widicus Weaver, assistant chemistry professor at Emory University and coauthor on the rebutted dihydroxyacetone paper. "I think we'll have to switch from reporting a determination to reporting the probability of a determination."

SOME NEW AVENUES are opening up, however, that may breathe new life into the business of hunting for complex molecules in space.

In the past five to 10 years, technological advances have made it possible to start exploring the terahertz region of the electromagnetic spectrum. The Atacama Large Millimeter/submillimeter Array, which is being built in Chile, and the European Space Agency's Herschel Space Observatory, a space telescope that is scheduled for launch late this year, will both be able to observe terahertz frequencies.

Because those observations will need to be compared with gas-phase spectra produced in the lab, astrochemists will be scrambling to obtain experimental rotational spectra of the same species.

"The lab work is easier than the interstellar space detections," Hollis says. "In the former, you control the sample; in the latter, only God knows what's in the sample."