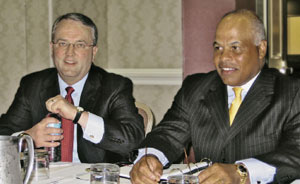 WHEN HE STEPS DOWN as chief executive officer of the American Chemistry Council later this year, Jack N. Gerard will leave a trade association that has more money and many more members than when he joined but that is stumbling in its bid to boost its reputation with the public.

The announcement that Gerard will leave after a little more than three years on the job was the surprise news at ACC's annual meeting, held a week and a half ago in Palm Desert, Calif. He will depart in September to take over the helm of the American Petroleum Institute (C&EN, June 9, page 12).

The former head of the National Mining Association, Gerard joined ACC at a difficult time for group, the U.S. chemical industry's main trade association. It was reeling from the forced resignation of its previous leader and the loss of several major chemical companies from its ranks. Gerard quickly cut back staff and refocused the association on just a few key issues such as plant security, energy, and rail transport. He then set out to win back members.

At the annual meeting, company executives were effusive in their praise for Gerard and the turnaround he led. Robert L. Wood, CEO of the specialty chemical producer Chemtura and current chairman of the ACC board, told reporters at a press conference that "we are disappointed to lose him" but that, given his track record, "he's a man in demand."

Members credit Gerard for returning the association's budget to the black and for recruiting 33 new members, including several companies that had left.

Yet ACC's attempt to improve its standing with the public seems to have stalled, despite its expensive image-enhancement program called essential2. The association spent on the order of $20 million in each of the past three years on television advertising and other efforts to inform the public about the benefits of the industry.

At last year's annual meeting, association executives reported that 49.8% of "informed Americans" had a favorable impression of the chemical industry, up from about 49.0% in 2006 and 46.8% in 2005. At this year's press conference, though, Wood acknowledged that the group's most recent poll found a decline in the public's view of the industry.

According to ACC staffers, bad publicity over phthalate plasticizers and the polymer raw material bisphenol A (BPA) is the main reason for the decline. Recent claims that children are in danger from trace amounts of BPA that leach out of polycarbonate baby bottles and epoxy can liners spurred a round of negative news articles and announcements by major retailers that they would stop selling baby products containing BPA.

ACC's official response was that BPA is safe when used to make plastics. It noted that food and health authorities in the U.S., Europe, and Japan have all come to the same conclusion.

AT THE MEETING, some ACC staffers said privately that they would have liked to have seen the association take a more conciliatory approach—perhaps by declaring BPA safe but also announcing an effort to work with customers to remove it from certain products out of deference to consumer fears.

At the press conference, however, ACC leaders defended the association's approach. "There are fundamental principles that underlie the industry, including science, research, and risk," Gerard said. "BPA is a case study, but those broader principles apply across the franchise of chemistry." Wood added that capitulation on BPA would allow the industry's opponents to move "on to the next product."

That is not to say the leaders were satisfied with their reaction. J. Brian Ferguson, CEO of Eastman Chemical and the newest ACC board officer, said the industry must learn to communicate better. "We should have been more active more quickly," he said about the response on BPA. "The lesson is we have a lot of data about our products, but we are traditionally an organization of scientists and engineers who don't make our living by communication."

Wood told reporters that the association decided at the annual meeting to form a committee of five to seven CEOs who, supported by ACC staff and outside resources, would try to anticipate issues that might dog the industry in the future. He expects the committee to report its findings at ACC's October board meeting.

As for essential2's advertising campaign, Wood said he personally thinks it remains important, despite its failure to keep raising public opinion. "When we approved essential2 in 2005, we said we'd look at it again in three years ," he said. Although no decisions have been made, he anticipates that in the future "the campaign is likely to have more facets than it has today and more ways of measuring effectiveness."

Wood noted that the industry's opponents don't typically use television as the vehicle for their attacks. "Part of essential2 will remain advertising," he said, "but how do we use blogs and grass roots—the same vehicles our opponents use?"

Of course, Gerard won't be there to help answer such questions. Wood reported that a CEO search committee has been formed and will soon begin interviewing candidates. Wood said he hopes to have a replacement on board before Gerard leaves on Sept. 1.