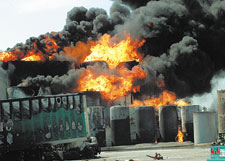 VideoTook Only A SparkThis Chemical Safety & Hazard Investigation Board video of Barton Solvents plant's destruction explains how a tank farm explosion and fire could have been avoided with proper equipment grounding and better handling of nonconductive flammable liquids.

A static spark during a routine transfer of solvents at a chemical distribution plant led to an explosion and fire, evacuation of 6,000 people, medical treatment for 11 residents and a firefighter, and destruction of the tank farm, according to a recent investigation and report from the Chemical Safety & Hazard Investigation Board (CSB). Last July, workers at the Barton Solvents distribution facility in Valley Center, Kan., were offloading a tanker truck holding flammable varnish makers' and painters' naphtha when a spark from an improperly grounded level-measuring float inside the receiving storage tank ignited a vapor-air mixture. The explosion sent the storage tank rocketing 130 feet, ignited other tanks, and created a cascade of overpressurized and burning tanks with 10-foot-diameter steel tank tops blasting into a trailer park and businesses as far as 400 feet away. The CSB report urges chemical plant operators and trade associations, as well as regulators, to address the hazard of nonconductive flammable liquids—such as naphtha, benzene, toluene, and cyclohexane—accumulating static energy and possibly exploding if an ignition source is available.