The Heat Is On
[+]Enlarge
Credit: NOAA CCSP 3.2
Short-lived air pollutants could cause temperature rises of 3 ºC in the U.S. heartland and eastern Mediterranean region by 2100, according to a new federal report. 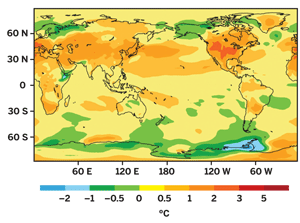 Credit: NOAA CCSP 3.2
Short-lived air pollutants could cause temperature rises of 3 ºC in the U.S. heartland and eastern Mediterranean region by 2100, according to a new federal report.

A NEW FEDERAL REPORT is suggesting a novel policy to forestall climate change in the short run. Rather than making deep cuts in carbon dioxide emissions, it says policymakers should consider slashing certain types of air pollutants, such as black carbon and smog, in the next decade or so.

This strategy would buy time for development of new energy technologies that sharply curb or eliminate CO2 emissions, according to the report, "Climate Projections Based on Emissions Scenarios for Long-Lived and Short-Lived Radiatively Active Gases and Aerosols." Released in early September by the U.S. Climate Change Science Program, the report also points out that the cuts in pollution would provide health benefits to people.

Reducing emissions from wood, dung, and other biomass burned for cooking and heating homes in Asia appears to offer the biggest bang for the buck as a short-term policy to offset global warming, the report says. Cuts in smog-forming pollution from cars and trucks in North America could have a similar impact, it adds.

THESE POLICIES would curb two types of widespread air pollutants that absorb Earth's heat, contributing to global warming. One is black carbon, a type of tiny soot particle released during combustion, especially the burning of biomass and diesel. The other is ground-level ozone, commonly called smog, which is formed from vehicle tailpipe emissions and releases of volatile organic compounds. Both smog and fine particles cause health problems and are targets of current air pollution regulations.

In contrast to smog and black carbon, some air pollutants actually counteract global warming, the report points out. For instance, sulfate particles that are by-products of burning coal reflect the sun's energy into space and thus help cool the planet. Sulfates also stimulate the formation of clouds, which reflect light and contribute to cooling. Therefore, regulations to control emissions from coal-fired power plants may contribute to global warming because they lower the level of sulfates in the atmosphere, the report says.

Anticipated increases in levels of black carbon and smog and a decrease in sulfate emissions are projected to cause a temperature rise of 3 ºC in the middle of the U.S. and in the eastern Mediterranean by 2100, the report says.

Although the report recommends targeted air pollution controls in the short term, these controls are not a substitute for addressing CO2 emissions, Shindell says.

Allen Robinson, a professor of mechanical engineering at Carnegie Mellon University, tells C&EN that curbing particulate matter emissions in Asia would amount to a "finger in the dike" in dealing with climate change.

The report is available at climatescience.gov/Library/sap/sap3-2/final-report/#finalreport.