All that glitters
[+]Enlarge
Credit: Steve Vidler/OTHK
Despite all of the technological innovation that takes place in Japan, it remains a hard place to make money in high-tech start-ups. 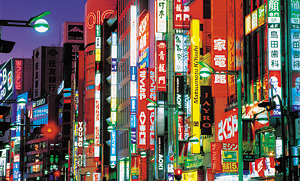 Credit: Steve Vidler/OTHK
Despite all of the technological innovation that takes place in Japan, it remains a hard place to make money in high-tech start-ups.

IN JAPAN, it's usually big, well-established, and relatively conservative companies that shoulder the risks involved in commercializing new technologies. But a few Japanese venture capital firms think that smaller start-up companies have a role to play in the country, and they have invested tens of millions of dollars to prove it.

Once dismissed as a country that's more content to imitate rather than innovate, Japan has been the world's largest filer of patents for several years, according to the World Intellectual Property Organization. Japanese companies, universities, and research institutes keep making discoveries. But the markets for all this research more often than not remain undeveloped. Japan pays billions of dollars more in royalties to the U.S. every year than the U.S. pays to Japan.

In the U.S., venture capital firms play a key role in providing the financing necessary for the commercial development of breakthrough discoveries. There is a venture capital scene in Japan, but it continues to struggle because of a paucity of good investment prospects. NIF SMBC Ventures, the trading firm Itochu, Jasco International, Japan Asia Investments, FinTech Global Capital, and Innovation Engine are some of the more active venture capital players.

"Science is roughly the same caliber in the U.S. as it is in Japan," says Goro Takeda, a former U.S. resident who is a managing partner focusing on life sciences at Tokyo-based FinTech Global Capital. "But the level of entrepreneurship is not as strong in Japan, so you almost have to go out and look for potential investment targets."

Established in 2006, FinTech focuses on investments in life sciences, new materials, semiconductors, medical equipment, and information technology. In the area of life sciences, the company targets technologies that are well on their way to commercialization. Takeda favors investing in drug candidates on which $30 million to $50 million has already been spent and that are about to undergo, or have already started, clinical trials.

Restructuring at Japanese pharmaceutical companies is providing a number of opportunities, Takeda says. On the one hand, he notes that Japanese drug firms are busy acquiring companies overseas. One example is Takeda Pharmaceutical's acquisition of Millennium Pharmaceuticals (C&EN, April 14, page 10). But on the other hand, big Japanese drug companies are spinning off the rights to some molecules that are patented in Japan. "We prefer to do deals that are just intellectual property-based," Takeda says. "If equipment and people are involved, we need to spend more money."

ONE CHALLENGE of investing in drug discovery in Japan is that nowadays the country's Ministry of Health, Labor & Welfare rarely approves drugs that have not already been approved in other countries. "There's no incentive to invest in drug launches in Japan," Takeda says. He expects that the ministry will reform its approval process because there is a backlog of drugs awaiting approval and the human trials required by the ministry cost too much to complete. For the time being, if FinTech invests in drug development, the work usually takes place outside Japan, Takeda says.

Takeda's colleague Mituhiko Hashimoto, who specializes in new materials and chemicals, says prospects are better in the sectors he oversees. He looks for opportunities to market Japanese technology worldwide or, conversely, to bring foreign technology to Japan.

One of his biggest projects is the restructuring of a 20-year-old Japanese printing company that has developed a unique process for making inorganic light-emitting diode (LED) displays. Following his advice, the company has abandoned its traditional printing business and is now focusing entirely on the commercial launch of its inorganic LED technology. Takeda notes that BASF, an investor in FinTech's high-technology venture capital fund, is providing technical assistance to the project.

In the U.S., many high-tech start-ups trace their origins to discoveries made at universities. In Japan, Hashimoto laments, only a minority of investment projects done in conjunction with academic institutions work out. "It takes too long to work with universities," he says.

His comments are echoed by investment managers at another Japanese high-tech venture capital firm, Tokyo-based Innovation Engine. Managing Director Yoichi Suzuki tells C&EN that his firm favors investing in companies that are doing early discovery work and that most of the start-ups that Innovation has invested in are spin-offs from large firms.

Joe Nakano, an investment manager at Innovation, says one of the big hurdles to investing successfully in start-ups in Japan is the lack of business knowledge among Japanese scientists. "We can find many companies that have good technology, but it's harder to find the ones that are well led," he says.

Japanese scientists, he says, have little interest in accounting and cash flow management. This isn't a problem when a company is just being created, but lack of business knowledge becomes a handicap when a firm grows to the point of employing 10 to 15 people, he says. Nakano believes U.S. scientists are far more willing to take business courses or to recognize their business shortcomings and seek professional managers.

INNOVATION NORMALLY invests less than $10 million in companies that are just beginning the commercial development of new technologies. It's a relatively high-risk approach that takes years to generate financial paybacks. But the firm can afford to invest for the long term because it, in turn, gets most of its funding from Japanese government entities that are eager to promote Japanese research. "Our investors are very patient," Suzuki says.

So far, Innovation has launched three investment funds. The first two, worth a total of about $55 million, are attempting to nurture high-tech companies to the point that they can launch on a stock market. Two firms have been publicly listed out of several dozen Innovation has invested in. The third investment fund, worth $27 million and started a year ago, aims to develop high-tech start-ups for the purpose of selling them to larger companies, based in Japan or elsewhere.

One of the companies backed by Innovation, Nanoloa, is a Fujitsu spin-off that is attempting to develop flat-screen displays based on ferro-electric technology. Nanoloa is one of the few commercial entities still pursuing research on this promising technology; larger firms have abandoned it, citing difficulties in mass-producing the displays. Suzuki says Nanoloa's work is coming to fruition and that the firm already has earned some revenues by licensing its technology.

According to investment manager Nakano, although the Japanese venture capital industry is fledging, it is slowly growing in size. Likewise, the number of Japanese scientists with an interest in becoming entrepreneurs is increasing.

At FinTech, Hashimoto says it is a challenge to make money by investing in Japanese technology, particularly in life sciences. "Of course," he adds, "if Japan was easy, everyone would be investing here."