From hushed reassurances to shouts from the rooftops, voices help people interact, and their rich sonic textures are like signatures. An injury or disease that diminishes the voice's strength and clarity can whittle away at one's sense of self, particularly for professionals whose voices often come to define them. Xinqiao Jia contends that carefully designed materials could help mend damaged vocal cords and restore speech and song to those who have been silenced.

Jia, an assistant professor of materials science and engineering at the University of Delaware, described her latest work in this area during a presentation in the Division of Polymer Chemistry at last month's American Chemical Society national meeting in Philadelphia. Her team has developed polymers that imitate elastin, a stretchy protein that is abundant in vocal cords. The researchers' hope is that their elastin mimics will create just the right environment for coaxing vocal cord cells in the lab to make real elastin, which they then could process into an implantable material for patients who need their voices back.

Voice disorders are most often associated with celebrities, such as Julie Andrews, who overexert their voices from repeated and strenuous use. But according to the National Institute on Deafness & Other Communication Disorders, laryngeal cancers and everyday wear and tear from smoking, acid reflux, or excessive yelling can create lesions on vocal cords that damage less famous voices, too. 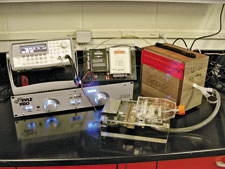 Voices originate from the vibrations of delicate tissue found in the human larynx known as the vocal folds. The term "vocal cords" refers to this tissue. Vocal folds have a three-layer construction, and the elastin-rich middle layer helps fulfill a demanding mechanical role, Jia told symposium attendees in Philadelphia. "During normal use, your vocal folds vibrate at 70 times per second," she said. The elastin-containing matrix that surrounds vocal fold cells "gives the tissue natural elasticity to sustain that high-frequency vibration," she added.

Even though tendons, ligaments, and other parts of the body contain elastin, using natural elastin to heal vocal folds isn't a viable option, said Sarah Grieshaber, a graduate student coadvised by Jia and her collaborator Kristi L. Kiick, an associate professor of materials science and engineering at the University of Delaware. "It's difficult to extract elastin from tissue because it's a cross-linked protein. You would have to use very harsh conditions that could degrade the elastin itself," Grieshaber told C&EN.

A number of research groups are interested in mimicking elastin, and not all are focused on vocal fold applications. Elastin can be extended and compressed repeatedly, and it lasts most of a lifetime in the body. Among proteins, these properties are rare, said Fred W. Keeley, an elastin expert at the University of Toronto who did not attend the ACS meeting but spoke with C&EN later. Those traits, he said, make elastin a desirable biomaterial for helping repair arteries, knees, and more.

Elastin's flexibility and strength are rooted in its structure. Its hydrophobic domains provide elastic recoil, and those domains alternate with cross-linking domains that help elastin assemble into fibers. Most elastin mimicry strategies are peptide-based, ranging from recombinant production of the full-length protein to peptide materials based on combinations of the two domains.

Jia's group uses a peptide for the cross-linking domain and polyethylene glycol (PEG), a Food & Drug Administration-approved polymer commonly used in biomaterials, for the hydrophobic domain. Elastin's ability to bounce back from deformation is driven by entropy, Keeley said, and PEG's flexible, randomly coiled chains are well suited to mimic that phenomenon. "When you stretch elastin you establish order in its chains. The recoil effect in elastin has to do with regaining that disorder," he explained.

The Delaware team's hybrid polymer recipe begins with solid-phase synthesis to assemble the peptide portions, which are then functionalized for attachment to PEG. The team explored many different reactions for joining the polymer's components but ultimately decided on click chemistry, the copper-catalyzed union of alkynes and azides, Kiick said. "Click chemistry is really versatile within the context of making polymeric materials," she told C&EN, citing the synthetic strategy's high reaction efficiency and the fact that its reaction conditions are compatible with the varied functional groups on peptides. A cross-linking step joins lysine residues in the polymer with sturdy urea linkages and generates polymer films, which the team makes in centimeter-sized molds.

The hybrid polymer behaves like elastin when the team compresses it, Jia said. In addition, preliminary toxicity tests suggest that the films are not harmful to vocal fold fibroblast cells from pigs, from which the team hopes to grow model vocal cord tissue for their studies. With most of the early tests completed, the Delaware team is now trying to add more features to their polymer and move toward engineering implantable tissue, Jia said.

The vocal fold is mechanically active, so stimulating cells to produce elastin on their own calls for a special environment beyond what a polymer alone can provide, Jia told symposium attendees. To give growing vocal fold cells the right development cues, her team designed a bioreactor that can vibrate or elongate a cell-filled polymer film at similar frequencies to those experienced by natural vocal fold tissues. Other researchers' work suggests that cells can respond to the mechanical properties of the matrix on which they're grown, Jia told C&EN. "Cells are smart. They know what they're supposed to do as long as you give them the right environment," she said.

The team has started seeding the elastin-mimicking polymers with vocal fold cells from pigs, but it isn't yet clear whether the cells will adhere well to the polymer films, something that's necessary for the cells to flourish on the film and ultimately in the bioreactor. The team's first materials were intended to test the polymers' mechanical aspects rather than to maximize cell adhesion, Kiick said. "Our next polymer design aims to improve cell adhesion to the films while retaining desirable mechanical properties," she added.

The Delaware team believes that its hybrid approach has the potential to offer a quick route to elastin mimics with mechanical and biological versatility. The click-chemistry strategy offers the potential for linking recombinant or synthesized peptides to myriad polymers, Kiick said. Such a diverse range of materials not only could unravel how vocal fold cells grow but could be useful in work with other types of cells.

"We think about cells as entities that collectively respond to molecular architecture," Jia added, referring to the way a cell's environment can influence that cell's development. "If we can make better materials, maybe we'll better understand how cells behave."