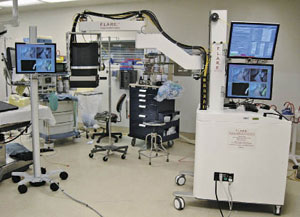 NEAR-INFRARED IMAGING for medical applications has long faced a chicken-and-egg problem. At first, researchers saw no need to develop instruments because there were so few dyes for highlighting biological features. At the same time, the lack of instruments discouraged the synthesis of improved dyes.

Forward-looking researchers haven't let that conundrum stop them. Medical researchers who use near-IR imaging for medical applications, and synthetic and analytical chemists who design new dyes and methods, described advances in the field during a symposium sponsored by the Division of Analytical Chemistry at last month's American Chemical Society national meeting in Philadelphia.

Near-IR imaging is attractive because it circumvents some of the problems associated with fluorescence imaging in the visible region. Although they are bright, visible dyes must compete with strong background fluorescence from the biological sample itself. This autofluorescence is diminished in the near-IR because few biological molecules fluoresce in that spectral region.

Near-IR imaging is already peering into the tough-to-study lymphatic system. Described as "the forgotten circulatory system" by speakers Eva M. Sevick-Muraca of the University of Texas Brown Institute of Molecular Imaging and Peter L. Choyke of the National Cancer Institute at the National Institutes of Health, the lymphatic system is a network of conduits throughout the body that serves as the body's drainage system. It is involved in homeostasis and the production of immune cells. Its most famous role, however, may be in cancer metastasis. Finding cancer cells in the lymphatic system is a sure sign that a cancer is spreading from one area of the body to another.

Sevick-Muraca and Choyke each chronicled their efforts to use near-IR imaging of the lymph nodes—organs that act as filters for the lymph vessels—to monitor the spread of cancer and guide treatment. For patients newly diagnosed with cancer, monitoring the lymph nodes is important, Sevick-Muraca said, because the presence of cancer in lymph nodes determines the level of treatment in many types of cancer.

Physicians usually examine lymph nodes for signs of cancer first by finding the nodes closest to the tumor, commonly known as sentinel nodes. This is typically done by injecting radioactive imaging agents near the tumor and using scintigraphy to determine which lymph nodes the radiolabel reaches first. These sentinel nodes are then surgically removed and tested for the presence of cancer cells; if they are cancer-free, no other lymph nodes need to be removed. Noninvasive near-IR fluorescent imaging agents that target cancer cells could allow much faster and more direct analysis without surgery, Sevick-Muraca said.

Moving the technology into the clinic requires that researchers demonstrate that the method is sensitive enough to detect the imaging agent noninvasively. Sevick-Muraca has used near-IR imaging to visualize the lymphatic system in 77 subjects, including breast cancer patients. Even using a nonspecific, low-efficiency dye that can't be conjugated to a target, her team was able to show that they could use the method to image lymph nodes noninvasively. "If we can image lymph nodes with a dim, nonspecific dye, we can do it with more efficient fluorescent dyes that can be attached to molecules that target or stick to cancer cells," she said. With properly optimized dyes, she predicts that near-IR imaging will be far more sensitive than techniques involving radionuclide-based agents.

Also within the context of near-IR imaging for looking at the lymphatic system, Choyke described his work with nanocrystalline particles known as quantum dots. QDs emit at various wavelengths depending on their size. He showed that he could resolve five different lymphatic drainage fields in the same animal using QDs with different emission wavelengths. At the moment, Choyke noted, such extensive multicolor imaging "may be a solution in search of a problem." 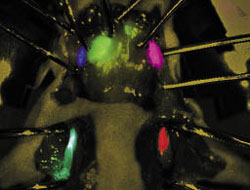 NEAR-IR IMAGING of lymph nodes could also find its way to the operating room. John V. Frangioni, a physician and researcher at Beth-Israel Deaconess Medical Center, in Boston, and Harvard Medical School, is developing technology to use near-IR imaging instead of radiolabeling to guide sentinel-node-removal surgery. His FLARE (Fluorescence-Assisted Resection & Exploration) system combines near-IR imaging with color video. He uses light-emitting diodes to excite heptamethine indocyanine dyes that are injected near the tumor. The near-IR images are superimposed on the video that the physicians watch as they operate. The hope is that the images can guide surgeons to remove only as much lymph-node tissue as needed.

In one example using FLARE, near-IR imaging identified a lymph node during a clinical study that other methods would have suggested was not a problem, Frangioni said. The surgeon removed the lymph node and subsequent pathology workups revealed that it did contain cancer cells.

Such medical applications depend on having appropriate dyes. When near-IR imaging was a new technique a decade ago, researchers relied on the dyes that already were available. Now, organic chemists are synthesizing new near-IR dyes with attractive spectral properties that can be used in a variety of applications.

A popular class of near-IR dyes is the phthalocyanines. These dyes have only a moderate fluorescence quantum yield, but their stability and resistance to photobleaching means that they still emit plenty of photons, said Robert P. Hammer, an organic chemist at Louisiana State University. A key component of these nitrogen-rich macrocycles is their peripheral groups that improve solubility or provide handles to conjugate the dyes to their biological targets.

Hammer described his efforts to synthesize asymmetrically substituted phthalocyanines. Asymmetric dyes with various peripheral groups are difficult to synthesize in solution, Hammer said, because "you get a little of the asymmetric in a sea of symmetric."

Through judicious choice of starting materials and solid-phase synthesis, the asymmetric dye is linked to a resin bead and the symmetric phthalocyanines can be washed away. Through the solid-phase approach, Hammer and his coworkers have prepared several water-soluble, functionalized phthalocyanine dyes, including amino, hydroxylamine, and "click ready" azide group derivatives for conjugation. 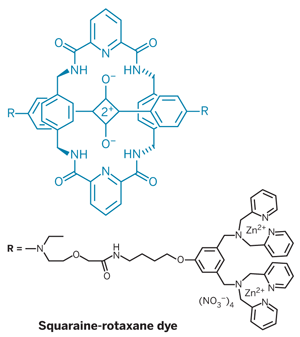 Another class of near-IR dyes is the squaraines, which have good photophysical properties for imaging. These dyes, however, have two significant problems—chemical instability caused by nucleophilic attacks on the cyclobutene dication, and the tendency to form nonfluorescent aggregates. To protect against these problems, Bradley D. Smith, an organic chemist at the University of Notre Dame, wants to give them "bulletproof vests"—a rotaxane macrocycle, that encircle the squaraine core (Angew. Chem. Int. Ed. 2007, 46, 5528).

Smith's group added bacterial-cell-targeting moieties to one of the squaraine-rotaxanes and used it to image a Staphylococcus aureus infection in a mouse. The dye targets the surface of the bacteria cells. The researchers inject the bacteria into the mouse's thigh and the dye into the mouse's tail vein. The fluorescent signal builds up over the course of three hours, Smith said, and washes out again in 18 hours. Therefore, it can be used for sequential imaging within the same animal, Smith said.

Robert M. Strongin, an organic chemist at Portland State University, wants to synthesize fluorescent dyes with large enough Stokes shifts—the difference between absorption and emission wavelengths—that they can be excited with visible light, but detected in the near-IR. That opens more possibilities for using multiple dyes in single imaging procedures. At the symposium, he described a family of dyes—the seminaphthofluorones—that fit the bill (Proc. Natl. Acad. Sci. USA 2008, 105, 8829).

The dyes in this family are benzoxanthenes which are synthesized using 1,6-dihydroxynaphthalene as the starting material. Other dihydroxynaphthalene isomers produce dyes that differ in the orientation of the aromatic rings and the location of the hydroxyl moieties. These structural changes allow Strongin to tune the spectral properties of the dyes.

One of these dyes, a linearly annulated compound called SNAFR-6, fluoresces in the near-IR when excited with blue-green light, representing a Stokes shift of nearly 200 nm. Strongin used SNAFR-6 in cellular imaging studies. Simultaneously staining the cells with organelle-specific dyes revealed that SNAFR-6 primarily localized in the endoplasmic reticulum, an extensive membrane system, and lysosomes, which carry digestive enzymes.

Gabor Patonay, an analytical chemistry professor at Georgia State University, described research that he is doing with his colleagues, organic chemists Lucjan Strekowski and Maged M. Henary, to develop carbocyanine dyes for near-IR imaging. Because these dyes act as noncovalent labels that form equilibrium complexes with their targets, excess dye is needed to ensure complete labeling. However, this excess dye generates background fluorescence. 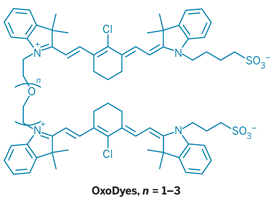 The GSU researchers switch off the unwanted background fluorescence by incorporating polymeric linkers that force two dye molecules close together, quenching their fluorescence. When the dimer binds to its target, the two dye molecules separate and fluoresce again. The length and composition of the linker determines how effectively the fluorescence is turned off and on. The best results can be achieved with 10- or 12-unit connectors, Patonay said.

For imaging applications, near-IR dyes must be water soluble. Bis(carbocyanines) with all-carbon linkers have limited solubility in water. To improve the solubility, Patonay and coworkers use poly(ethylene glycol) (PEG) linkers instead. They call the new dyes OxoDyes. Only the dye with two PEG units works as a noncovalent label, he said. Because of the additional flexibility provided by these PEG groups, researchers can use OxoDyes to map changes in the secondary structure of proteins, such as the switch from α-helix to β-sheet, Patonay said.

The symposium title asked "how near and how far" is near-IR imaging, not just in terms of wavelength but in terms of acceptance. It may still be farther than researchers would like, but it's moving nearer all the time.