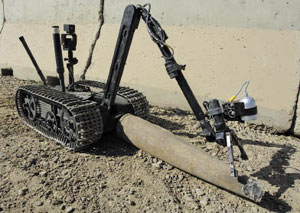 Credit: Department of Defense/C&EN
The development of remote control robots to examine improvised devices, like the robot seen here, has saved lives.

IN THE IRAQI CONFLICT, almost half the casualties suffered by coalition forces are caused by improvised explosive devices (IEDs). In Afghanistan, IEDs cause about 30% of the casualties. The rapid increase in the use of this tactic, beginning around 2003, made finding ways to defeat IEDs a top priority for the Department of Defense.

Building on a successful program started by the Army, the Joint Improvised Explosive Device Defeat Organization was established by then-secretary of defense Donald H. Rumsfeld in February 2006. JIEDDO is designed to be a single point of contact for all counter-IED efforts throughout the DOD and to coordinate efforts with the intelligence agencies, as well as with public and private partners. This diverse effort had a budget of about $4.4 billion for fiscal 2007, and JIEDDO was made a permanent organization within the Office of the Secretary of Defense this past May.

Some of that money goes to a wide range of science and technology research projects to detect and neutralize IEDs in the battlefield. "Countering IEDs is a very broad and extremely diverse problem. We use sociology, anthropology, criminology, quantum physics, and everything in between to defeat them," says Col. Martin E. B. France, the science adviser to the director of JIEDDO, Lt. Gen. Thomas F. Metz.

"Early on we focused our efforts almost entirely on defeating IEDs by mitigating the effects of the explosion by increasing armor," France tells C&EN, adding that efforts later moved toward trying to neutralize or predetonate these devices. "But the problem has become more complex, and we are always trying 'to move to the left of the boom;' that is, stop the device before it explodes or even before it is put in place," he says.

France emphasizes that JIEDDO needs to work swiftly and constantly because the enemy is very flexible and quickly adapts to technology fixes that foil IEDs. "This is something particularly good about our organization," he says. "The normal DOD acquisition process can take one to two years just to define the problem and get proposals, but we will go from announcing a science or technology need to actually putting the component in the field in 12 to 18 months."

France says the program identifies science & technology needs by reviewing information about operational gaps that comes directly from the battlefield. "We filter out the technology aspects of those operation gaps and compare them to existing S&T programs at the service labs to identify the technology gaps. We then put out a series of broad announcements saying that we need help in these technology areas and that we have money. Anyone—in the service labs, academia, or industry—can submit proposals, which go through a panel review process," France explains.

"Ideally you'd like to be able to find explosives' signatures from anything that could be an IED from as far away as possible."

The program is looking for solutions to those gaps that can be accomplished in a short time, less than 18 months. According to JIEDDO the best proposals include hard analyzable test data that support the concept of the work and promise a working prototype that can be tested.

JIEDDO REPORTS that it has invested approximately $300 million in about a hundred separate science and technology projects in fiscal 2007 and 2008 to respond to counter-IED technology gaps. In the past year, France says, they have sent 89 different technologies, including hardware, software, tactics, techniques, and procedures, to the war fighter in the theater.

"We think a lot, too, about the training, logistics, and human factors involved in integrating new systems into the operational theater," France says. "We send over a team to help integrate these systems into the fight and to do an operational evaluation to see if they are successful." Systems with positive results, he says, will be made available for use in the field right away. "Our goal is to transfer successful programs as soon as we've demonstrated they are effective," France notes.

Some of the challenges the program is working on right now include how to find the pressure plates that detonate an explosive when they are buried 18 inches underground and ways to mitigate the impact of explosively formed projectiles, those metal-liner missiles in IEDs that can move at 6,000 feet per second and penetrate armor.

One research area that has both near- and long-term future payback is standoff, or remote, detection of explosives, France says. "Ideally you'd like to be able to find explosives signatures from anything that could be an IED from as far away as possible."

Christopher K. Murphy, a civilian contractor working at JIEDDO, says that research on standoff detection has provided a lot of basic information about explosives technology. For example, he says that studies have discovered that artillery shells, which were used often in IEDs, do not give off enough volatile compounds to be detected from a distance using today's chemical-based sensor technology.

"We also asked if a trace detection device, operating in the contaminated environment of a battlefield, could detect a chemical signature from an IED," Murphy says. "We went to the national training center, where the Army trains troops going to Iraq using live-fire exercises, where the environment is contaminated. We learned that the probability of detection of an explosive present in that environment is essentially a coin flip."

ANOTHER AREA of technology with potentially high benefits is the controlling of blasting caps. "We are looking for ways that we can detect the blasting cap in an explosive, dud the blasting cap, or predetonate it from a safe distance," France says. "If we can do any of these things with the blasting cap, it changes the game considerably."

France notes that they are also seeing an increase in the use of homemade explosives. "We are looking for methods of detecting particular signatures of precursor chemicals because we have a lot of homemade explosives," he says. "These are particularly tricky because they can be made from common chemicals that are very hard to track. But they do have chemical signatures that we can exploit."

The struggle to defeat IEDs is not just confined to the U.S. fighting in the Middle East, France says. "There are probably 200 to 300 IED events each month outside of Iraq and Afghanistan. Recently they have been used in Algeria, Philippines, India, and Spain," he notes. "We work very closely with our coalition partners on this, especially the U.K. because of their experience with IEDs in Northern Ireland. And, of course, we have had them in the U.S.," France says.

The number of casualties from IED attacks has decreased significantly in the past year, but France knows the job of countering these devices is not over. "We have seen a dramatic decrease in IED activity in Iraq. It's still substantial though. The trend is up in Afghanistan, however, as we see different technologies, techniques, and methods migrate to other areas," France says. "I don't think anyone here [at JIEDDO] believes that the IED fight is something where we'll have a breakthrough next week and we'll win. It is something that is going to go on for quite some time."

Pollution
Measuring microplastics in seafood
Persistent Pollutants
US FDA sets voluntary arsenic limit in infant rice cereal
Persistent Pollutants
Goodbye to some PFAS in food packaging
Share X
To send an e-mail to multiple recipients, separate e-mail addresses with a comma, semicolon, or both.
Title: Stopping The Bombs
Author: David J. Hanson
Chemical & Engineering News will not share your email address with any other person or company.