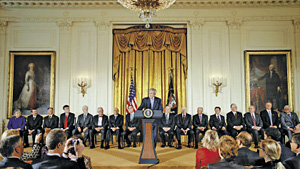 The National Medal of Science is the country's highest honor for outstanding contributions to the knowledge of the biological, engineering, mathematics, physical, or social and behavioral sciences awarded by the President. Established in 1959, the medal has been awarded to 442 individuals so far. The National Science Foundation manages the annual award on behalf of the White House.

The National Medal of Technology & Innovation, formerly known as the National Medal of Technology, is the highest honor for outstanding contributions to the nation's economic, environmental, and social well-being through the development and commercialization of technology products. The medal was established by Congress in 1980 and has been awarded to 172 individuals, teams, or companies. The annual award is administered by the Patent & Trademark Office.

At the gala, medalists were escorted by students from two local high schools, Benjamin Banneker Academic High School and Thomas Jefferson High School for Science & Technology, as the administering agencies handed out miniature medal lapel pins to the recipients. Others in attendance included family, friends, colleagues, former medalists, and government officials. All were treated to highlights of the recipients' accomplishments and glimpses of their personalities by way of two- to three-minute video tributes.

The official medal presentation was held in the East Room of the White House the morning after the gala. Each medal recipient was greeted by the President, who presented the winner with a gold medal.

"This is a joyous day for the White House as we honor some of our nation's most gifted and visionary men and women," the President said during welcoming remarks. "Each of our honorees has extended the frontiers of knowledge, and in so doing they've inspired a wave of innovation."

Mostafa A. El-Sayed, the Julius Brown Chair and Regents Professor of Chemistry & Biochemistry and head of the Laser Dynamics Laboratory at Georgia Institute of Technology, was the first of two ACS members to receive the 2007 Medal of Science from the President.

El-Sayed was honored for his contributions to the understanding of electronic and catalytic properties of nanostructures and nanomaterials.

Currently, his lab is researching the optical and chemical properties of noble metal nanoparticles and their applications in catalysis, photonics, and medicine. El-Sayed tells C&EN that he is currently working with his son on a collaborative project using gold nanoparticles to target and kill cancer cells.

El-Sayed grew up in Egypt and received a bachelor's degree from Ein Shams University, in Cairo. He came to the U.S. on a fellowship, earning a Ph.D. from Florida State University. He is also the former longtime editor-in-chief of the Journal of Physical Chemistry.

Robert J. Lefkowitz, the James B. Duke Professor of Medicine & Biochemistry at Duke University and a Howard Hughes Medical Institute investigator, was the other ACS member to receive the 2007 Medal of Science. 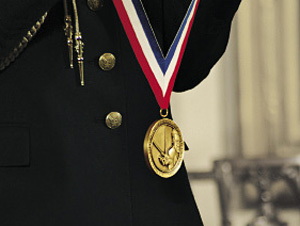 "The award recognizes my career-long obsession with cellular receptors for hormones, drugs, and neurotransmitters," Lefkowitz tells C&EN. His discovery of the seven-transmembrane receptors and description of their general mechanism of action earned him this honor.

Lefkowitz credits his fellowship experience at the National Institutes of Health in the late 1960s for stimulating his interest in research. He says that was when he "first tasted the exhilaration that can come from doing research."

He grew up in New York City. Lefkowitz received a B.A. in chemistry and an M.D., both from Columbia University.

Lefkowitz and El-Sayed were joined in receiving the medal by a half-dozen other top-tier scientists.

Fay Ajzenberg-Selove, a professor of physics at the University of Pennsylvania, was honored for her contribution to nuclear physics in areas that include energy generation from fusion, dating of artifacts, and nuclear medicine.

Leonard Kleinrock, a professor at the University of California, Los Angeles, received honors for his fundamental contributions to the mathematical theory of modern data networks and for the functional specification of packet switching. His contributions are foundational elements of Internet technology.

Bert W. O'Malley, Tom Thompson Distinguished Service Professor of Molecular & Cellular Biology at Baylor College of Medicine, was honored for his pioneering work on the molecular mechanisms of steroid hormone action and hormone receptors and coactivators.

Charles P. Slichter, a professor at University of Illinois, Urbana-Champaign, earned this top honor for establishing nuclear magnetic resonance as a powerful tool to reveal the fundamental molecular properties of liquids and solids.

Andrew J. Viterbi, a professor at UC San Diego, received his medal for the development of the maximum-likelihood algorithm for convolutional coding, known as the "Viterbi algorithm," and for his contributions to Code Division Multiple Access (CDMA) wireless technology. This contribution has transformed the theory and practice of digital communications.

David J. Wineland, a researcher at the National Institute of Standards & Technology, in Boulder, Colo., was honored for developing the technique of laser cooling for manipulating ions. His research has applications in ultraprecise measurements and standards, quantum computing, and fundamental tests of quantum mechanics.

THE WINNERS of the 2007 National Medal of Technology & Innovation include three ACS members.

Roscoe O. Brady, of NIH, was honored for discovering the enzymatic defects behind hereditary metabolic diseases such as Gaucher, Niemann-Pick, Fabry, and Tay-Sachs.

Brady attended Pennsylvania State University and received an M.D. from Harvard Medical School. He served in the Navy at the National Naval Medical Center, in Bethesda, Md., before moving across the street to work at NIH.

Adam Heller, a professor at the University of Texas, Austin, is another ACS member honored with the 2007 Technology & Innovation Medal. His contributions to the fundamental understanding of electrochemistry and bioelectric chemistry, and the development of technological products based on his advances, earned him this honor.

He is especially recognized for the development of the FreeStyle, a glucose-monitoring device requiring only 200 nL of blood to make a measurement. This contribution, along with others made in the areas of human health and well-being, has improved the quality of life for millions of people.

Heller tells C&EN, "I was one of the very few Jewish children who survived the Holocaust in Transylvania, then part of Hungary." He says that from this experience emerged a personal need to contribute to society to the best of his abilities. He received M.Sc. and Ph.D. degrees in chemistry from the Hebrew University of Jerusalem.

C. Grant Willson, the Rashid Engineering Regents Chair at UT Austin, is the final ACS member to have been recognized by the President at the medal ceremony. He was honored for developing novel lithographic imaging materials and techniques. His contributions have enabled the manufacture of smaller, faster, and more efficient microelectronic components.

He credits his high school chemistry teacher with inspiring him to study chemistry and helping him get into UC Berkeley. He earned an M.S. and a Ph.D. from San Diego State University.

Willson and the other ACS members who won the 2007 National Medal of Technology & Innovation had plenty of talented company at the awards ceremony.

David N. Cutler of Microsoft was recognized for designing and implementing standards for real-time, personal, and server-based operating systems. One of his notable contributions was carrying Microsoft's Windows NT-based computer operating systems from conception to production.

Armand V. Feigenbaum of General Systems was honored for leading the development of the economic relationship of quality costs, productivity improvement, and profitability, which resulted in the Total Quality Management approach for achieving performance excellence and global competitiveness.

eBay was recognized for pioneering the technology that encouraged and supported online trade. John Donahoe accepted the Technology & Innovation Medal for eBay.

Awards
Dreyfus Prize to Robert Langer
People
Dreyfus Prize in the Chemical Sciences to Michele Parrinello
People
Five Honored With Draper Prize
Share X
To send an e-mail to multiple recipients, separate e-mail addresses with a comma, semicolon, or both.
Title: 2007 National Medal Laureates
Author: Rochelle Bohaty
Chemical & Engineering News will not share your email address with any other person or company.