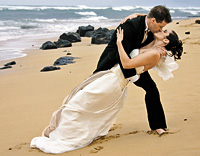 While a GOLDEN WEDDING RING may be the most visible symbol of the everlasting bond between you and your spouse, the romantics here at Newscripts were saddened to learn that the jewelry itself is anything but eternal. Even the nuptial act of slipping the gold band on your beloved's finger is just the first of countless abrasive maneuvers that will slowly erode the ring and leave minute traces of gold wherever you go. It's even been found in laundry dryer lint.

Georg Steinhauser, a chemistry postdoc at Austria's Vienna University of Technology, decided to quantify his wedding band's weight loss during his first year of marriage. He recently published the results of the study in a paper dedicated to his wife, Veronika, on their first wedding anniversary (Gold Bull. 2008, 41, 51).

Each week—usually on Thursday—Steinhauser meticulously cleaned and weighed his wedding ring using an ultrasonic bath and a microanalytical balance. When he started, a week after his wedding day, the 18-carat yellow gold ring weighed 5.58387 g. A year later, the ring had lost 6.15 mg, with an average weekly decline of 0.12 mg.

A vacation on the sandy beaches of Malta led to the highest weekly weight loss (0.23 mg), with gardening coming in a close second (0.22 mg). Steinhauser noted that hand clapping while attending a rock concert also led to an above-average abrasion (0.17 mg), as did skiing (0.20 mg). Spending two days in bed with the flu seemed to have no influence on the ring's weight loss, nor did a short trip to Spain, despite having to carry a heavy suitcase.

What was Mrs. Steinhauser's reaction to the ring research? "She is a psychologist and does not always share my enthusiasm about chemistry and science," Steinhauser says. "But she shared my happiness about every single weighing result when I came home and told her about the last week's result. Sometimes she reminded me on Thursdays to not forget to weigh the ring."

From the Department of Obscure Information:

Steinhauser is continuing the research, although he now weighs the ring just every six months. "The plan is to publish this long-term study as the 'work of my married lifetime' at the end of my scientific career," he says. "Divorce is out of the question!"

And while no love may be lost from wedding-band wear and tear, there is a financial loss. "In Vienna, a city of some 1.7 million inhabitants, there are approximately 307,000 married couples," Steinhauser points out. "Assuming that approximately 60% of them wear a wedding ring (made of 18-carat gold) regularly, the abrasion of 368,400 wedding rings would cause the annual total loss of 2.2 kg of 18-carat gold." That adds up to about $59,400 of lost gold dust in Vienna alone. Following that same logic, the 55.2 million married couples in the U.S. lose about 407 kg of gold each year at an annual cost of almost $11 million.

There was also a more chemically relevant lesson from Steinhauser's study: To avoid contamination, scientists should remove any gold rings before entering analytical laboratories dedicated to the analysis of trace metals. For the same reason, the winners of this year's Nobel Prizes might also want to refrain from wearing their shiny new gold medals in the lab.

Catalysis
Stir bar contamination may inadvertently catalyze reactions
Education
Nerdy Nuptials
Synthesis
The 'Golden' Years
Share X
To send an e-mail to multiple recipients, separate e-mail addresses with a comma, semicolon, or both.
Title: Newscripts
Author: Bethany Halford
Chemical & Engineering News will not share your email address with any other person or company.