PLANT ON A PLATE
[+]Enlarge
Credit: EMB
Microreactors bring production processes down to a miniature scale. 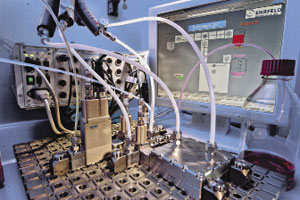 WITH THE BACKING of large companies, microreactor technology—that darling of academic papers, R&D labs, and small-scale production—finally seems to be moving into major industrial applications.

In a microreactor, chemical reactions occur continuously in channels that are only several millimeters in diameter, rather than in large mixing tanks, vats, vessels, pipes, and other large-scale components of conventional process technology. Because of the channels' small scale, heat transfer is highly efficient and hazardous reactions can be handled more safely than with traditional batch procedures.

Working together, teams from DSM in the Netherlands and Corning's R&D center in France demonstrated industrial-scale operation of a hazardous nitration reaction. Because the reaction unfolds continuously in microreactors, the demonstration was able to yield more than 25 metric tons of material in only four weeks. Corning says its glass microreactor technology is capable of handling 800 metric tons of process fluids per year, assuming 8,000 hours of operation.

"For the first time we have been able to show how Corning's unique microreactor technology can solve an existing problem by demonstrating efficient processing at an industrial scale with a difficult chemical reaction," says Gary S. Calabrese, the firm's vice president for science and technology.

The technology requires a shift in how researchers and engineers think about production.

Bernt Schober, new business development operations manager at DSM Pharma Chemicals, adds that the intercompany team was able to achieve pilot production for a challenging reaction in a "remarkably" short period of time. "The combination of Corning's microreactor technology and DSM's chemical expertise allowed us to carry out this pilot production in a safe and operationally effective way," he says.

Meanwhile, Bayer Technology Service's subsidiary Ehrfeld Mikrotechnik BTS (EMB) has concluded a worldwide license agreement with the German engineering company Mingatec for manufacturing and marketing microstructured reactors and heat exchangers. The reactors and exchangers will extend EMB's portfolio in microstructured apparatus for laboratories and technical service facilities by adding the capability for production throughput of several metric tons of product per hour.

As Philippe Caze, new business development manager at Corning's microreactor unit, puts it, the technology facilitates conducting aggressive chemistry and processing a large volume with a small footprint, obviating big mixing-tank reactors. Hence the reactors' attractiveness to researchers in academia, in R&D labs, and selective small-scale production processes over the past decade.

BUT NOW, the technology is becoming increasingly appealing to production departments within pharmaceutical and specialty chemical companies. Caze points out, for example, that a single one of Corning's glass units can process at least 40 metric tons of fluids per year when running continuously, all in a package measuring 30 × 30 × 60 cm.

Several units running in parallel, he adds, enable production of some 500 metric tons per year. "You don't need to scale up, you just add another unit. There is no limit to the number of units which can be put together," Caze says, although, he concedes, "when you have too many, the product quality controls would be a challenge."

The technology, however, requires a shift in how researchers and engineers think about production, says Olaf Stange, managing director of EMB. Instead of working out a lab process and then worrying about scale-up, scientists can plan commercialization of a continuous process almost as soon as it is developed at the benchtop phase.

Researchers can vary the process parameters quickly and easily by changing the flow rate and pumps, for example, or by varying the temperature or pressure. "This gives much more flexibility and leads to faster time from the lab to production," Stange says.

Continuous processing is increasingly important for the fine chemicals industry, in particular, say officials at ThalesNano, a Budapest, Hungary-based specialist in continuous-flow processing.

The impression that companies have to fit their processes to the technology has hampered acceptance of the microreactor approach, some microreactor proponents acknowledge. That in part helps explain the cautious, slow take-up by industry for commercial operations.

The technology is actually much more flexible, argues Carmine Raffa, marketing manager at EMB. "The main thing is to have a simple but powerful microreactor system. You don't need a special program language for the process automation systems, for example," she says.

IN ITS BID to open new markets for microreactor technology, Corning has partnered with the U.K.'s Center for Process Innovation, based in Wilton, England, to set up a Corning microreactor test facility for European and U.S. markets. Supported by the regional government, CPI is intended to serve as a center of innovation for the U.K. process manufacturing sector.

Sophie Walton, advanced processing business development manager at CPI, says, "We had looked at microreactor technology before," but CPI had never found anything quite right. One problem with stainless steel units is corrosion. "We wanted a superior microreactor suitable to performing real industrial chemistry," she says. "And Corning wanted someplace to test some very difficult chemistries outside its facilities at Fontainebleau," near Paris. One potential subject for trials could be butyllithium chemistry.

CPI and Corning will work with prospective industrial clients to evaluate their current processes and perform initial feasibility studies with the reactor and surrounding infrastructure. This approach will enable clients to fully assess the reactor for their processes and products before taking the risk on a large capital outlay, Walton says.

"Six years ago when Corning started this project," recalls Sergio Pissavini, business director for the firm's microreactor technology unit, "our goal was not to make a tool just for the lab. We wanted an industrial tool. This is not a toy—it is a production tool."

Calabrese is convinced it is a tool that pharmaceutical chemical producers will want to use. Even if they have to pay to recertify their processes with regulatory authorities, he says, the switch from batch to microreactor synthesis will be worth it because the cost savings can quickly cover the extra expense, as well as the cost of new reactor equipment. Such economic considerations, he adds, will become increasingly important for manufacturers of drugs that are coming off patent. "This is a disruptive step change—it brings a huge increase in productivity," he says.