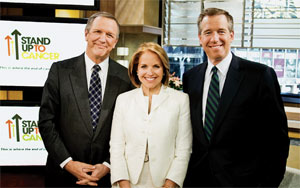 CBS EVENING NEWS anchor Katie Couric is no stranger to the fight against cancer. Couric, whose husband died of colon cancer in 1998, has since advocated vigorously for early detection, famously broadcasting her own colonoscopy when she hosted the "Today Show." Earlier this year, she broadened her target, spearheading an effort to raise philanthropic dollars for general cancer research.

She was not alone. ABC's Charles Gibson and NBC's Brian Williams, Couric's counterparts at the other major networks, stood with her for the launch of Stand Up To Cancer (SU2C) last May. With film producer Laura Ziskin and television producer Noreen Fraser, both cancer survivors, on its board of directors, SU2C is essentially an entertainment industry initiative. It is also very much in tune with an important trend in cancer research, one highlighted by the participation of all three major network news anchors—the trend toward collaboration.

According to Marge Foti, chief executive officer of the American Association for Cancer Research, SU2C's scientific partner, 70% of SU2C's approximately $100 million in available money will go only to partnerships—collaborative research efforts undertaken by groups of commercial or institutional laboratories that have traditionally competed against each other. Foti says this is, in part, meant to foster translational research, the practice of linking clinical development directly to drug discovery. But mostly, she says, it reflects a realization that cancer will not be cured within the walls of disjointed, competitive research labs. "Team science is something the scientific community says needs to be done going forward," Foti says.

"When there is money available to put collaborations together, groups that viewed each other as competitors get excited."

LATELY, there is palpable enthusiasm in the cancer research community. The greater understanding of the genetic nature of the disease, fostered by the flood of data unleashed in the decoding of the human genome, has set every major drug company and research institute to work on new compounds to better target the disease and work toward a cure. Therapies such as Herceptin, a breast cancer drug that targets the HER2 receptor, are at the forefront of a personalized medicine approach, one that generates drugs catered to individual patients based on genetic information about their cancers. And researchers are beginning to explore the development of combination therapies, an approach of administering multiple drugs, or cocktails, that has proven effective in the treatment of HIV.

It is clear, however, that a new level of collaboration must be reached in order for researchers to crunch the numbers, design the clinical trials, and get access to all of the available compounds needed to move the most promising drugs and combinations of drugs to the market. Connections need to be made between the traditional islands of research. Data will need to be shared by big cancer centers, and big drug companies will have to work together in exploring combination therapies—levels of collaboration generally thought of as beyond the pale.

Yet the seeds of such collaboration are sown in exactly the kind of partnerships that SU2C seeks to fund. According to Jeff Hanke, vice president for cancer research at AstraZeneca, the major cancer centers with which large drug companies develop emerging cancer therapies are gaining access to a wide range of preclinical compounds with leeway to investigate how they might work together.

With new science comes a new research culture, Hanke says. "Up until the 2000s, I don't think people understood how complex cancer would be. There were no deep insights into the number of mechanisms involved and how adaptable they are," he says. "We have to reach across walls to do things effectively. There is a lot more dialogue and openness at the major cancer centers. Scientists are really excited about getting together."

Thomas J. Lynch, chief of the division of hematology and oncology at Massachusetts General Hospital, agrees that researchers are anxious to get together and work across the traditional competitive boundary lines. And the SU2C grant system will help provide funding needed to make this happen. "When there is money available to put collaborations together, groups that viewed each other as competitors get excited—they can get it done, make it real time, and help everybody," Lynch says.

SU2C may be the new kid on the block in cancer research fund-raising. It is likely to get some public attention given its entertainment industry front office. And public attention, as was shown in HIV/AIDS research in the 1980s and 1990s, is a powerful force. Its scientific advisory committee, headed by Nobel Laureate Phillip A. Sharp of Massachusetts Institute of Technology and comprising 18 scientists and two patient advocates, is formidable. Much about the organization is emblematic of the changes that are positioning the pharmaceutical enterprise for breakthroughs in cancer research.