A Hero Preserved In Brandy

In Spirit And Stone
[+]Enlarge
Credit: Shutterstock
A statue of Lord Nelson adorns the column at the center of Trafalgar Square, in the heart of London. 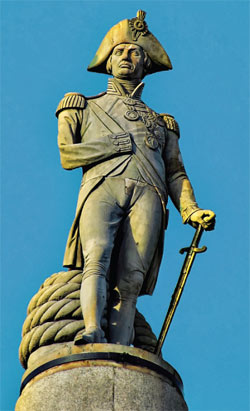 Credit: Shutterstock
A statue of Lord Nelson adorns the column at the center of Trafalgar Square, in the heart of London.

An important lesson in tissue conservation chemistry emerged from the death of Vice Admiral Horatio Nelson, one of Britain's most revered military heroes. Nelson was fatally shot at sea on Oct. 21, 1805, while leading the Royal Navy to a decisive triumph in the Battle of Trafalgar during the Napoleonic Wars. Suspecting that a state funeral would be in order for the adored commander, William Beatty, the surgeon aboard Nelson's vessel, the H.M.S. Victory, opted to preserve Nelson's remains for the trip back to England instead of conducting the customary burial at sea. Beatty later published the book "The Death of Lord Nelson," an account of the event that explained his procedure and his observations in detail.

By the early 1800s, preservation in liquor was a well-recognized practice, so Beatty decided to place Nelson's remains in a large cask filled with brandy. The cask was lashed to the deck and placed under guard. Throughout the voyage to England, Beatty refreshed the brandy because the corpse absorbed a significant quantity of fluid. He sometimes used defined ratios of brandy and "spirit of wine," a distilled ethanol, which he obtained at port in Gibraltar.

Once back home, the British press roundly criticized Beatty for failing to preserve Nelson in rum, which at the time was believed to be superior to brandy as a preservative, says John E. Simmons, an independent museum consultant. "The reason everyone thought rum was a better preservative was because it was commonly used, but rum was commonly used because it was cheap," Simmons explains.

Beatty defended his actions in "The Death of Lord Nelson" and laid out the chemical principle underpinning good preservation—ethanol concentration. He wrote: "There are several kinds of spirit much better for [preservation] than rum; and as their appropriateness in this respect arises from their degree of strength, on which alone their antiseptic quality depends, brandy is superior. Spirit of wine, however, is certainly by far the best, when it can be procured."

When Beatty examined the preserved body weeks after Nelson's death, he found that "it exhibited a state of perfect preservation, without being in the smallest degree offensive." Beatty's careful attention to chemical detail was vindicated when the Victory's officers and other public figures saw Nelson's body for the first time. Beatty wrote, "All the Officers of the ship ... witnessed its undecayed state after a lapse of two months since death, which excited the surprise of all who beheld it." Nelson was given a state funeral and was entombed in St. Paul's Cathedral, in London.