Lilly Drops An Anchor In Shanghai 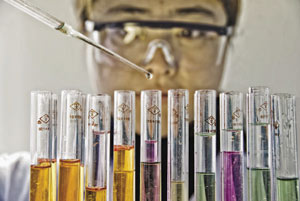 LAST MONTH, a group of senior scientists from Eli Lilly & Co. started working out of an office in Shanghai's Zhangjiang Hi-Tech Park. Rather than do research themselves, they are there to provide scientific leadership to the Chinese firms that Lilly has tasked with a steadily expanding range of R&D activities.

"Large multinational drug companies conduct research in China either by building their own brick-and-mortar R&D centers or by building relationships with contract research organizations," says Robert W. Armstrong, a Lilly vice president in charge of global external R&D. "We are in the second camp."

Non-U.S. pharmaceutical companies, including Novartis, AstraZeneca, Roche, and GlaxoSmithKline, have built or are in the process of building their own R&D centers in China. U.S. drug firms such as Lilly, Pfizer, and Merck & Co. have generally opted to take advantage of China's scientists by collaborating with third parties there.

Armstrong does not see the new coordination facility in Shanghai as contradicting Lilly's aversion to brick-and-mortar investments in Chinese research. As the range and complexity of the R&D services Lilly purchased in China expanded, the need for a permanent scientific presence became clear. For one thing, Lilly can now better respond when a research partner in China comes up with lab results that are at odds with what scientists at the firm's Indianapolis headquarters had expected.

More important, the presence of experienced Lilly scientists in China improves the firm's ability to identify promising research partners. "If we stay in Indiana, we're going to be closing ourselves to the ideas that are elsewhere," says William W. Chin, the Indianapolis-based vice president in charge of discovery research and clinical investigation.

Lilly was motivated to come to China, Armstrong points out, because both patients and shareholders are demanding improvements in Lilly's ability to bring innovative drugs to the market in a cost-efficient way. "We see partnerships as a mechanism to learn how to do things differently, not as a substitute for the things that we do right now" in the U.S., Armstrong says.

For the five years beginning in 2007 and running until 2011, Lilly will spend a minimum of $100 million on third-party research in China, says Tony Y. Zhang, the managing director of the new Shanghai center who relocated to China from the U.S. earlier this year.

Through its local partners, Lilly already employs 300 scientists in China, the majority of them chemists, Zhang points out. Shanghai ChemExplorer, a member of the Shangpharma contract research and manufacturing group, works exclusively on Lilly projects. About a year ago, Lilly set up a profit-sharing research collaboration with Shanghai-based Hutchison MediPharma (C&EN, Oct. 22, 2007, page 39).

Lilly's investment in the coordination center is modest, Zhang acknowledges. It consists of 5,500 sq ft of office space essentially devoid of scientific instruments. Zhang says Lilly's scientists will make use of data and instrumentation supplied by the company's Chinese partners. There are 10 Lilly senior scientists from Indianapolis in China now, and Zhang expects that number could increase to 30.

The group that Lilly has established in China may be small in number, but it is staffed with "drug hunters," Chin says. These are scientists who over the years have demonstrated the ability to tease promising drug candidates out of the reams of data that discovery labs generate every day. For example, before Peter A. Lander relocated to Shanghai to become Lilly's head of discovery chemistry in Asia, he was in charge of drug lead generation at the firm's headquarters.

Armstrong insists that Lilly employees in the U.S. don't feel threatened by the company's expansion in China. In response to cost pressure, "we have been challenged to do things differently," he says. "China is part of a transformation agenda for our R&D."

According to Armstrong's colleague Chin, merely cutting expenses and employees is not a smart way to contain the cost of bringing new drugs to market. "We have to have an innovation engine," he says. "We cannot save our way into the new drugs for our patients of the future."

Business
AstraZeneca to spin off Shanghai R&D
Business
Why China’s contract research firms are doing more business at home
Business
Merck Plans R&D Center in China
Share X
To send an e-mail to multiple recipients, separate e-mail addresses with a comma, semicolon, or both.
Title: Lilly Drops An Anchor In Shanghai
Author: Jean-François Tremblay
Chemical & Engineering News will not share your email address with any other person or company.