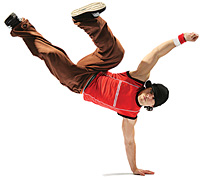 Samba-savvy scientists, it's time to dust off your dancing shoes. Nov. 16, the deadline for the 2009 "DANCE YOUR PH.D." contest, is swiftly approaching. Sponsored by the American Association for the Advancement of Science, the contest is open to anyone who has or is pursuing a Ph.D. in any scientific field or in science-related fields, such as bioethics or the history of science. All dancing-prone doctorates are eligible, whether they're in academia, industry, or have found employment further afield, in, for example, patent law or science writing.

"The human body is an excellent medium for communicating science—perhaps not as data-rich as a peer-reviewed article but far more exciting," notes John Bohannon, Science magazine's "Gonzo Scientist," who is coordinating the contest.

The inaugural "Dance Your Ph.D." contest was held earlier this year in Vienna, and winners got a year's subscription to Science. For 2009, the contest's organizers decided to put the competition on a global stage and offer a much grander prize—their Ph.D. dance interpreted by a professional choreographer and performed at the AAAS annual meeting in Chicago in February. Winners will also receive two nights' accommodation at the meeting.

Boogie-down brainiacs should make a video interpreting their Ph.D. thesis in dance form using any style they choose—be it ballroom, ballet, or the bunny hop—and post the opus on YouTube. They should then e-mail the relevant details to gonzo@aaas.org, and Bohannon will post the video on the contest's webpage.

Winners will be selected from four categories: "Graduate Student," for those who are currently enrolled in a Ph.D. program; "Post-Doc," with a Ph.D. but without tenure at a university; "Professor," for those with both a Ph.D. and tenure at a university; and "Popular Choice," which goes to the video with the highest YouTube view count by the deadline.

More details and official rules of the doctorate disco can be found at gonzolabs.org/dance. 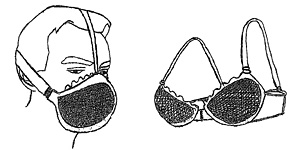 Women wise in the ways of fashion know that to look good, a lady needs good foundations. Now, UNDERGARMENTS could supplement self-defense, as well as style, thanks to a new invention brought to our attention by the patent combers at the Annals of Improbable Research.

U.S. patent No. 7,255,627 was granted to Avocet Polymer Technologies on Aug. 14, 2007, for a "garment device convertible to one or more facemasks." Invented by Elena N. Bodnar, of Hinsdale, Ill., and Raphael C. Lee and Sandra Marijan, of Chicago, the device is intended to provide protection from harmful airborne particles.

According to the patent, if a country or a territory is facing a threat of air contamination, its citizens need "to have a higher degree of access to facemasks. However, it is often inconvenient, impractical or burdensome for people to carry masks wherever they go."

To solve this problem, Bodnar, Lee, and Marijan envisioned a brassiere that could do double duty as a pair of facemasks. "When the garment is used as a bra, the cup portions are fitted over the breasts and the straps wrap around the torso to secure the bra to the body," the patent explains. "The front midsection and back midsection of the bra are separable. Each cup of the bra includes an air filter. When the air becomes contaminated due to an act of warfare, terror or other event, the user can remove the bra and detach the cups forming two facemasks. The user then secures the facemask to her face and can provide the other facemask to a bystander."

Electronic Materials
Chemistry in Pictures: To tat a butterfly
3-D Printing
Footwear feats
Share X
To send an e-mail to multiple recipients, separate e-mail addresses with a comma, semicolon, or both.
Title: Newscripts
Author: Bethany Halford
Chemical & Engineering News will not share your email address with any other person or company.