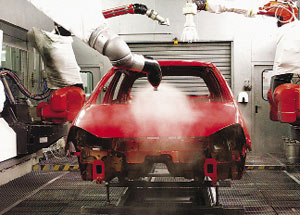 CITING A "MASSIVE" DECLINE in global demand from automakers and other customers, BASF, the world's largest chemical firm, says it is temporarily shutting down 80 plants worldwide. Other major chemical companies are also feeling the pinch as the Detroit automakers General Motors, Ford, and Chrysler seek government help to keep afloat.

Chemical demand has plummeted since October, BASF Chairman Jürgen Hambrecht says. Textile and construction customers have cut back orders, but "in particular, customers in the automotive industry have canceled orders at short notice."

The firm is also slashing production at an additional 100 plants worldwide at least through January 2009 and perhaps longer. Together, the cuts affect 20,000 employees, and earnings will slip as BASF prepares for tough times, Hambrecht says.

BASF's cuts, representing 25% of the firm's industrial capacity, are "unprecedented in recent memory," says P. J. Juvekar, a stock analyst at Citigroup. Chemical companies such as Dow Chemical, PPG Industries, DuPont, Celanese, and Huntsman Corp. are also likely to suffer from the auto industry's woes, he says. DuPont acknowledges that it gets 16% of sales from the auto industry, and Dow says it gets about 10% of sales from the sector.

T. Kevin Swift, chief economist at the American Chemistry Council, values the chemical content of each light vehicle made in the U.S. at $2,664. That content includes adhesives and sealants, coatings, fibers, plastic resins, rubber-processing chemicals, synthetic fluids, and synthetic rubber.

All told, U.S. automakers purchased $34.9 billion in chemicals in 2007 to build 13.1 million light vehicles. As the number of vehicles made in the U.S. declines, chemical sales will fall too, Swift tells C&EN. For the first 10 months of this year, General Motors' domestic sales fell 20%, Ford's dropped 18%, and Chrysler's were off 26%. 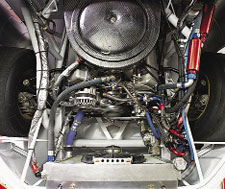 Credit: iStockphoto
Hoses, belts, and plastic housings under a car hood are all chemical industry products.

Many chemical firms have already felt the auto industry slowdown. PPG plans to close an auto paint facility in Clarkson, Ontario, by mid-2009 and eliminate 150 jobs. France-based Arkema, which supplies polymers to automakers in Europe, has been hurt by the slowdown and pledges to keep production capacities in line with demand. Shell admits to a slowdown in chemical demand from automotive customers. International Specialty Products reports a drop in demand for styrene-butadiene rubber used in tire production.

"The U.S. auto industry needs reform," says Frederick M. Peterson, president of consulting outfit Probe Economics. If one or more of the Detroit automakers goes out of business, Peterson reasons, the chemical industry shouldn't care. What matters, he says, is the total number of cars produced—and more is better.

However, a Dow spokesman says his firm fears for the long-term viability of the U.S. auto industry. "In these unprecedented times, we believe it would be unwise to let this vital part of the U.S. economy fail," he says.

Solutia, which gets 5% of sales from U.S. automakers, supports a government bailout of the hard-pressed industry. A spokesman for the company acknowledges that automakers need to reform their business just as Solutia did in its own bankruptcy reorganization, from which it emerged earlier this year. But getting private financing is next to impossible in today's credit market, he notes, and without government money, bankruptcy could close down an automaker for good.

Economy
Coronavirus starts to weigh on industry
Specialty Chemicals
Tariffs will muddy the waters for automotive materials
Business
World Chemical Outlook 2019: Around the globe
Share X
To send an e-mail to multiple recipients, separate e-mail addresses with a comma, semicolon, or both.
Title: Auto Woes Hit Chemical Makers
Author: Marc S. Reisch
Chemical & Engineering News will not share your email address with any other person or company.