AFTER EUROPEAN chemical company reports of third-quarter results this year, it's clear that "the economic skid marks can no longer be ignored." 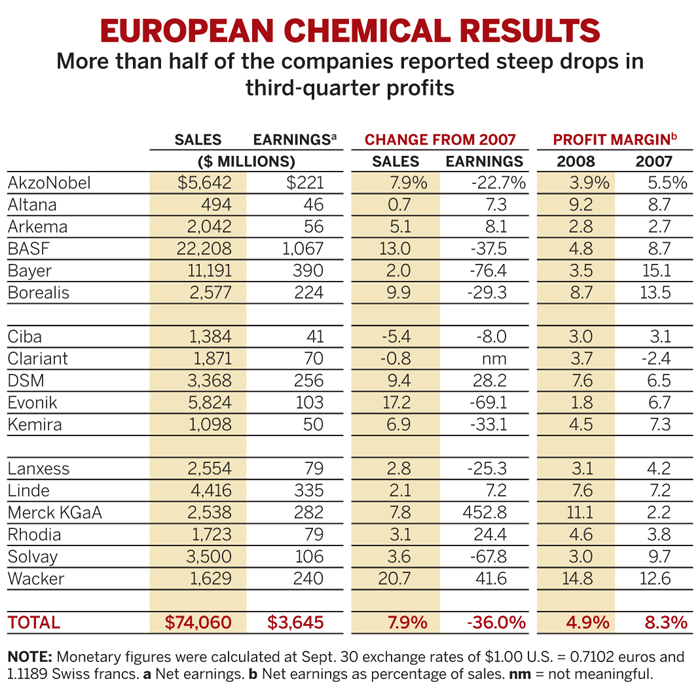 That was the assessment made by Jürgen Hambrecht, chairman of BASF, at the company's recent press conference to report on its own third-quarter results. And during the past few weeks, executives throughout the industry—from Hambrecht's peers at other European giants to chief executives of the region's small specialty firms—concurred with that assessment.

For example, Matthias L. Wolfgruber, chief executive officer of Wesel, Germany-based Altana, says his company "has noticed the weakening general business environment," and he expects the situation to continue into the near future. "Over a short period of time, inventory effects and a slowdown in our value chain will, of course, have a significant impact," he says.

"Since October," notes Thierry Le Hénaff, CEO of France's Arkema, "we observed a sudden ongoing slowdown of demand in some markets, especially in automotive and construction, amplified by destocking, which strongly limits visibility on the economic environment in the fourth quarter of 2008."

Jonathan Tyler, a director specializing in the chemicals industry at investment bank Houlihan Lokey, says the industry is polarized right now. There are those companies that are in good shape and are waiting for opportunistic acquisitions, and there are those with higher debt levels that consequently will be battered by economic conditions.

This financial crisis is different from previous ones, Tyler says, because "it is of a different magnitude." The true extent of the crisis "has taken a while for people to get their heads around, and they perhaps hadn't fully seen it coming until several weeks ago," he says. Since then, "things have deteriorated further."

To bolster that point, Tyler relates talking with one chemical executive earlier this month who "said his company's volumes were down 10–15%—that's just in this quarter. I got the feeling he was braced for further drops." He predicts that sales volumes will be sliced off commodity-style products in markets around the world. Moreover, those drops in volume could be accompanied by declines in prices, which will substantially impact corporate sales and profitability.

The chemical industry prides itself on being the sector that enables many others to run. But as the financial crisis has hit consumer industries, and demand has begun to slacken, the attendant slowdown is rippling back through the chemical industry.

Evonik Industries, for example, anticipates that economic growth will continue slowing around the world and "a recession seems very probable in North America." The worst affected sectors, the German company confirmed in its third-quarter report, are automotive and construction.

Altana's answer is to batten down the hatches. "We are preparing ourselves thoroughly for the coming year with a set of measures to reduce costs and optimize cash flow," Wolfgruber says. That's a course of action that will be increasingly common throughout the industry.

"THE WORLD ECONOMY has now clearly entered a phase of lower growth, particularly in the mature markets," according to AkzoNobel's third-quarter reporting statement. "In these challenging markets, only lean companies succeed. We have therefore started a rigorous drive to further reduce our cost base." The Dutch company's full-year operating profits, the statement reads, are expected to be "close to the 2007 pro forma level" that includes the results of the company's acquisition of ICI in January.

Indeed, despite the headwinds blowing against them, many of the companies reporting third-quarter results held firm to earlier projections for full-year profits. For example, the German firm Lanxess is so confident of achieving operational sales and profit growth for the year as a whole that "we are raising our earnings forecast for 2008," Chairman Axel C. Heitmann says.

Lanxess was formed when Bayer divested its basic chemicals operations, leaving it with pharmaceuticals, crop science products, and engineering polymers and materials. It is polymers and materials that held down Bayer in the third quarter because that business area was "greatly hampered" by raw material and energy price increases. "Selling-price increases and cost savings from our restructuring program only partly offset these effects," Bayer Chairman Werner Wenning says. 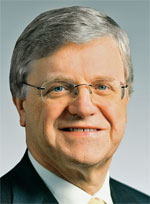 However, Wenning insists that "despite the difficult environment we expect in the fourth quarter, we are confirming our guidance for 2008 as a whole."

EXECUTIVES at Evonik are bracing for a global economic downswing, which they expect "to have a perceptible effect in the fourth quarter of 2008," particularly in the chemical business. That's significant for Evonik because its chemical business, formerly known as Degussa, makes up nearly three-quarters of its total sales and operating profits. Nonetheless, the company insists that "no change has been made" to profit projections it made at the year's halfway point.

Full-year operating profit margins at Arkema, Le Hénaff says, "should be close to our 10% target," thanks to an ongoing action plan for significantly reducing fixed costs and adjusting—if needed—production capacity. By the end of this year, he adds, the cumulative fixed cost savings should be nearly $465 million compared with results in 2005, the first full year after the company was spun off from France's oil giant Total.

And at compatriot French firm Rhodia, officials say they observed "a favorable inflection point at the end of the third quarter," after a period of "massive" raw material and energy inflation and adverse currency fluctuations. The favorable turn "should gradually materialize" in Rhodia's accounts starting in early 2009, a company statement says.

Other companies have scrapped previous earnings predictions. Ciba CEO Brendan Cummins, for example, points to deteriorated business conditions in the third quarter, particularly in European and U.S. markets. The company anticipates that this slowdown will spill over into Asia. Consequently, Cummins says, earlier guidance given for 2008 profitability "is no longer applicable in the current business climate."

The company's pretax profit margin can be maintained, he predicts, but free cash flow levels are expected to be lower than previously anticipated.

And few would argue with a statement from Borealis, which notes, "The ongoing financial crisis and volatility of the markets around the globe is affecting real demand and will impact the petrochemicals industry." According to CEO Mark Garrett: "We believe that significant parts of the world economy are already in recession. There are very clear indications of a significant softening of the polyolefin markets in the current quarter and beyond. We need to step up attention to our cost-competitiveness, particularly in Europe."