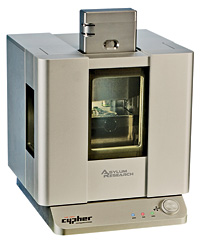 Institute of Photonics researchers at the University of Strathclyde, in Scotland, are working to create a diamond-based Raman laser. By using diamond as a solid-state laser material, they hope to design small, compact lasers that can operate at currently unavailable wavelengths with greater power-handling capabilities. Materials producer Element Six is supplying single-crystal diamond made via chemical vapor deposition. Element Six is a joint venture between diamond supplier De Beers and Belgium's Umicore, a materials and metals producer. The U.K.'s Engineering & Physical Sciences Research Council is supporting the three-and-a-half year project through a grant of nearly $1 million.

Asylum Research has announced the Cypher atomic force microscope for analysis of small samples. The company claims that Cypher is the world's highest resolution AFM. The microscope uses a closed-loop system with sensors in all three spatial dimensions to achieve atomic resolution. Other features include automatic laser alignment, interchangeable light source modules with laser spot sizes as small as 3 µm, and cantilevers smaller than 10 µm. The system's integrated enclosure provides acoustic and vibration isolation and thermal control.

Smiths Detection's newly formed diagnostics business is developing a clinical system for hospital labs and point-of-care settings. Its Bio-Seeq system will enable nonspecialists to rapidly screen for pathogens such as Clostridium difficile and methicillin-resistant Staphylococcus aureus. The company has a similar portable veterinary system, which uses disposable sample preparation units, for detecting foot-and-mouth disease. Both systems use a Linear-After-The-Exponential (LATE) PCR method licensed from Brandeis University to amplify and analyze genetic material. Smiths is seeking partners to codevelop tests to run on the Bio-Seeq system.

Nanoimaging
[+]Enlarge
Credit: NIST
This TSOM image of a60-nm gold particle isgenerated by combining multiple out-of-focusimages of the particle at different focal positions. The vertical axis shows the through-focus distance, so the nanoparticle appears both above (blue) andbelow (red) the focal plane of the microscope. 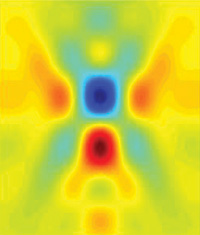 Credit: NIST
This TSOM image of a60-nm gold particle isgenerated by combining multiple out-of-focusimages of the particle at different focal positions. The vertical axis shows the through-focus distance, so the nanoparticle appears both above (blue) andbelow (red) the focal plane of the microscope.

PerkinElmer has introduced the RamanMicro 300, a Raman microscope designed to obtain data from small samples or small areas of large samples. Linking the new microscope to the RamanStation 400 creates a system that is suitable for routine analyses, as well as remote sampling and Raman imaging. PerkinElmer is targeting a broad range of applications with the microscope, including pharmaceuticals, polymers, material conservation, forensic analysis, and explosives analysis.

A new method allows scientists to obtain nanoscale images with an inexpensive optical setup that consists of only a research-grade optical microscope, a camera, and a moveable stage. Ravikiran Attota and coworkers at NIST developed through-focus scanning optical microscopy (TSOM), in which a series of out-of-focus images taken at different focal positions is analyzed with a computer algorithm to obtain a single image (Optics Lett. 2008, 33, 1990). The researchers use the method to identify differences between nanoscale objects, such as lines on integrated circuits or nanoparticles. The technique has potential applications in nanomanufacturing, semiconductor process control, and biotechnology.

Agilent Technologies and BioTrove have expanded their existing co-marketing agreement to integrate technologies in their mass spectrometry (MS) offerings to the drug discovery marketplace. BioTrove will add its RapidFire automated sample preparation system, as well as software, to Agilent's triple-quadrupole and time-of-flight MS instruments. The RapidFire system uses robotics and microfluidic handling to introduce samples at a rate of six to eight seconds per sample.

Thermo Fisher Scientific has opened a new facility in Reinach, Switzerland, to support pharmaceutical and chemical companies in the region. The 12,000-sq-ft facility houses analytical instrumentation operations and consolidates the Flux Instruments and Spectronex product lines that the company acquired from SwissAnalytic Group in early 2007. Also included is a demonstration lab where customers can familiarize themselves with Thermo Fisher's instruments and obtain product support.

Celia H. Arnaud and Ann M. Thayer write Inside Instrumentation. Contact them via e-mail to instrumentation@acs.org.

Physical Chemistry
Bio-Rad
Analytical Chemistry
Xylem Analytics
Analytical Chemistry
New And Notable At Pittcon: Molecular Spectroscopy
Share X
To send an e-mail to multiple recipients, separate e-mail addresses with a comma, semicolon, or both.
Title: Inside Instrumentation
Author: Celia H. Arnaud and Ann M. Thayer
Chemical & Engineering News will not share your email address with any other person or company.