An artist scans a nanoscientist's samples for framable landscapes 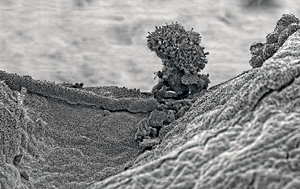 Credit: Samples, Zhengwei Pan; Images, Michael Oliveri/Jackson Fine Art
Inside a tube furnace at 500–600 ºC, shrublike forms take shape on a grass of zinc oxide that has grown atop a zinc foil.

IN THE RIGHT HANDS, say, in those of artist Michael Oliveri, a scanning electron microscope (SEM) of roasted ceramic films can pull off miracles of sorts: The invisibly tiny dimensions of the micro- and nanorealms become Ansel Adams-like images, with arresting landscapes that simultaneously come off as familiar and otherworldly.

Oliveri, whose first degree is in electronics, is a professor of art and digital media at the University of Georgia, where the field has been renamed "Art X." He has struck up a cross-campus collaboration with materials scientist Zhengwei Pan, and together, they make an alloy of art and science.

Pan, known for his skills at making nanobelts, nanowires, and other structures made of inorganic materials, has long appreciated the power of images to convey to wide audiences at least some of what makes leading-edge science and technology so exciting and fascinating. He even uses the term "NanoArt" in reference to, in his words, "a new art discipline in the intersection of art, science, and technology."

Which is why Pan quickly embraced the idea of working with Oliveri when a colleague in the physics department, Yiping Zhao, first introduced the two of them about two years ago.

A mainstay of Pan's work is to heat metal or metal oxide powders, among them zinc and gallium oxides, in a low-pressure environment in which the powders evaporate or decompose into vapor. The components of the vapor then accrete into a variety of compositions and forms, depending on the underlying substrate, the presence of catalytic surfaces, the substrate's wetting characteristics, the temperature profile, and the composition of gas that Pan vents into the tube furnace where most of this materials-making takes place. In many cases, a metal substrate such as a zinc foil adds to the microtopography when it partially melts before becoming subtly textured with a layer of oxide nanoparticles deposited from the vapor. These nanoparticles then serve as seeds for the growth of nanorods from the components in the vapor.

When Pan uses his lab's SEM to look at the results, it's primarily to collect data and to document the nanoscale structures and textures that different materials and reaction conditions yield. After all, these could become the stuff of next-generation transistors, sensors, or light-emitting devices.

Oliveri, whom Pan taught to use the SEM, brings into the collaboration a different intention. "I take their samples, the stuff they are cooking and making, and I travel across it, like a tourist, like a landscape artist traveling across the Southwest," he says.

Credit: Samples, Zhengwei Pan; Images, Michael Oliveri/Jackson Fine Art
Atop an alumina substrate in a furnace at 900–1,000 ºC, powders of graphite and germanium and zinc oxides transform into a buoyant landscape. The graphite reduces the oxides to their metals, zinc and germanium, the latter of which form spheres (up to 5 µm in diameter) that then serve as catalytic sites for the growth of zinc oxide nanowires (100–200 nm thick), which end up between the substrate and the germanium caps.

When Oliveri finds an SEM view to die for, which might only occupy an area that is a speck to a speck, he takes about 40 sequential images that he later digitally stitches together into high-resolution, large-format panoramas covering sample swaths that span up to a few hundred micrometers. This past spring, he and Pan hung a half-dozen, 3- by 9-foot panoramic oxide-scapes in a show, called Innerspace, at the university's Lamar Dodd School of Art gallery. The event again proved to Pan how well pictures communicate and serve as vehicles of public education.

Five hundred people came to the reception, Pan says with great satisfaction. "They would look at an image first and their response was, 'Wow, what is this?' " he recounts. "And then they would ask us many, many questions." The images are destined for a more sustained public viewing too: An Atlanta-based real estate development company has purchased the set of images, which it will hang in a new 50-story skyscraper in the north Atlanta district of Buckhead.

"THE PUBLIC thought they were fantastic," Rhona Hoffman observes, referring to the two large Oliveri prints she hung in her eponymous gallery in Chicago. She is especially fascinated by the way nanotechnology—which she describes as "this world we can't see but know is there"—is riddled with features reminiscent "of water, sky, and land."

Credit: Samples, Zhengwei Pan; Images, Michael Oliveri/Jackson Fine Art
In the presence of a little oxygen, the melted top layer of a zinc foil in a tube furnace at 500–600 ºC oxidizes and grows into a dense thicket of nanorods between 50 and 150 nm in diameter. In some locations, the reactants build up from the overlying vapor into twisted geometries, in this case yielding what could be a postapocalyptic nanoscape.

Anna Walker Skillman, owner of Jackson Fine Art gallery in Atlanta, also observed that visitors were drawn to the large-format images that she recently hung. "They are not sure what they are looking at," she notes, "but then when they learn about it, it becomes more fascinating and even more mysterious."

In that respect, these gallery visitors aren't so different from scientists like Pan, Oliveri contends. "I think so much of scientific research is aesthetically based," he says, noting that he has heard Pan blurt out "ooh" while working at the SEM. As much as by data and theories, Oliveri says, "scientists are driven by aesthetics."

Materials
Chemistry in Pictures: Rainbow in the rock
Polymers
3M takes a wrap on innovative thinking
Education
Painting with fire
Share X
To send an e-mail to multiple recipients, separate e-mail addresses with a comma, semicolon, or both.
Title: Postcards From Innerspace
Author: Ivan Amato
Chemical & Engineering News will not share your email address with any other person or company.